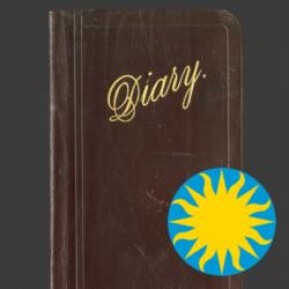 Started in 2013, the Smithsonian Transcription Center is a website (freely accessible, 24 hours a day) that connects volunteers around the world with Smithsonian collections available for transcription. This crowdsourcing project was developed—with the help of amazing SI Staff and external developers—as a way to improve and increase the quality of public engagement with Smithsonian materials, increase access and use of our digitized content, and create pathways of learning and new knowledge between the public and Smithsonian staff.  In short—the Transcription Center is a place for you (and anyone in the world) to explore materials held within the Smithsonian and play a part in making those collections more accessible. 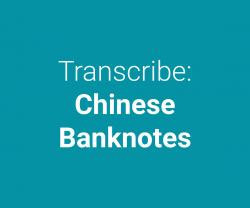 <p>In this collection, the Smithsonian Transcription Center and the National Museum of American History's National Numismatic Collection invite you to help transcribe the languages recorded on historic Chinese Banknotes. This work will help ensure that researchers around the world can more easily find and use these collections. </p> <p>Collection includes: instructions on required and optional steps for transcription, translation, and transliteration; links to the Chinese Banknote transcription projects on the Smithsonian Transcription Center website; and more.</p> <p>Keywords: currency, money, Chinese language, NNC, NMAH, American history, East Asian history, foreign language</p> <p><strong>Background</strong></p> <p>The Smithsonian's National Numismatic Collection (NNC) is America's collection of monetary and transactional objects. This diverse and expansive global collection contains objects that represent every inhabited continent and span more than three thousand years of human history.</p> <p>Established in the mid-19th century, several of the earliest additions to the NNC were artifacts from Japan, Korea, and China, including coins and medals gifted to President Ulysses S. Grant from Japanese Emperor Meiji (received in 1881) and the 2,025 East Asian coins, amulets, and notes from George Bunker Glover’s private collection (received in 1897). These donations were the foundation of the NNC’s East Asian holdings, which continues to grow with new acquisitions, such as the Howard F. Bowker collection in 2017.</p> <p>During 2017-2018, the NNC digitized more than 8,000 of its East Asian Coins, making them publicly accessible and available for research worldwide. The NNC is now working to digitize 6,000 Chinese notes and paper transactional objects that range from the Ming Dynasty to the present day.</p> <p>One of the main challenges to the digitization process is the transcription of several Asian alphabets, which would increase accessibility and searchability for the many items in this collection. Sometimes this can be done quickly, but often the process is too lengthy for NNC team members to complete while moving the project forward efficiently. In order to continue to share these objects rapidly, we need your help! </p> <p>The digitization of the East Asian coins and Chinese banknotes would not have been possible without the generous support of the the Howard F. Bowker family and Michael Chou. </p> <p>For full instructions, please see <a href="https://transcription.si.edu/chinesebanknotes">this page</a> on the Smithsonian Transcription Center website.</p> 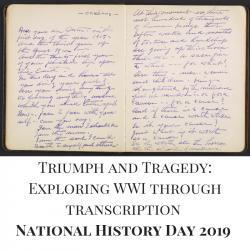 <p></p><p>This collection brings together Smithsonian resources to support the initial research into a project for National History Day 2019, "Triumph and Tragedy in History." #NHD2019</p> <p>These resources - including photographs, museum objects, newspapers, diaries, administrative records, pamphlets, and correspondence - explore the varying military and civilian experiences during World War One. Resources highlight what the Great War was like for soldiers, and how the military experience differed for African Americans and whites during a time of legalized segregation and racism in the United States. Other materials featured include diary entries, correspondence, and publications discussing the impact of WWI -both during and after the war- on the home front.  Many of these primary and secondary sources were featured as projects on the Smithsonian Transcription Center, and have been fully transcribed by digital volunteers--making these collections easier to read, search, and explore. </p><p>By no means is this collection comprehensive; instead, it provides a launching point for further research. <br /></p> 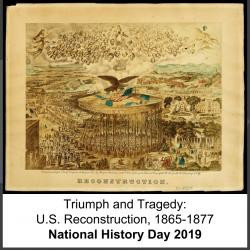 <p>This collection brings together Smithsonian and other federal resources to support the initial research into a project for National History Day 2019, "Triumph and Tragedy in History." #NHD2019</p> <p><br /></p> <p>These resources - including photographs, broadsides, political cartoons, publications, correspondence, ledger books, and government documents - explore the varying experiences, political arguments, and consequences of the period following the American Civil War, known as Reconstruction. Resources highlight the opposing ideas for and against Reconstruction policies - and their consequences - by the federal government and its citizens, including political leaders and activists. Also included are digital resources related to Constitutional Amendments passed during this era, supporting secondary resources, and various cartoons, broadsides, speeches, and imagery portraying the African American response to Reconstruction policies and the promises of citizenship and equal rights. Other primary source documents included provide a glimpse into how Reconstruction may have affected individual lives and businesses, and links to digitized collections (and corresponding transcriptions) of thousands of documents from the U.S. Bureau of Freedmen, Refugees, and Abandoned Lands. </p> <p>By no means is this collection comprehensive; instead, it provides a launching point for further research. </p> <p><em>Tags: Civil War, Reconstruction, U.S. Reconstruction, postwar, South, perspective, politics, southern democrats, Radical Republicans, African Americans, Freedmen's Bureau, Records of the Bureau of Freedmen, Refugees, and Abandoned Lands, art, photographs, political cartoons, military, 19th century, 1800s, Abraham Lincoln, Andrew Johnson, Hiram Revels, amendments, #NHD</em></p>