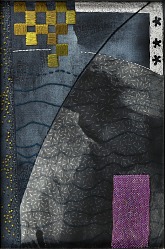 SI Center for Learning and Digital Access
Teacher-created lesson in which students analyze the 'food system' in their community. They look for solutions to any ecological or social problems inherent in the system. 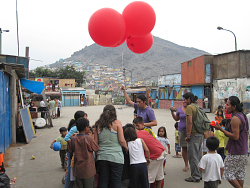 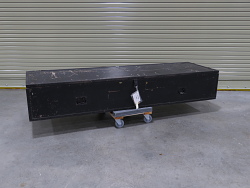 "One of the great challenges of modern cosmology is to discover what the geometry of the universe really is."

Margaret Geller may be speaking to Harvard students in the popular astronomy course she's taught there for the past 15 years. But nothing could be closer to her true quest of understanding the geometry of the universe over time.

In 1986 Geller and her colleagues at the Harvard-Smithsonian Center for Astrophysics created a map of galaxies in the nearby universe. The map showed what few then believed possible: on the largest scale, the universe has a distinct structure, with "walls" of galaxies surrounding areas with very few galaxies. It has become known as the stickman map because some of the galaxies in it form what looks like a stickman.

Geller likens the universe's 3-D pattern to bubbles or foam and believes she has a clear picture of the structure of the current universe. Geller's latest foray into mapping galaxies, however, will look deep into space at a seven-billion-year-old universe. She hopes that charting that territory and comparing it with what the universe looks like now will show how objects in space form and evolve.

To better see and study this distant region, Geller will be using the Multiple Mirror Telescope (MMT) on Arizona's Mount Hopkins. New machines developed for this telescope ensure that measuring the distance of far-off galaxies will be faster than ever.

"There's something really beautiful about science," says Geller of her life's work, "that human beings can ask these questions and can answer them. You can make models of nature and understand how it works."

To many of those unfamiliar with them, Rio de Janeiro’s favelas—dense urban settlements of cheap, sometimes illegally built dwellings and shops—are objects of fear and curiosity. Outsiders associate these neighborhoods with extreme poverty, drugs and crime, and rarely visit, though they house nearly 25 percent of Rio’s population.

But for the past several years, Google and a Brazilian nonprofit called AfroReggae have been working to do something that might help break down barriers between the favelas and their surrounding areas: map them.

The winding streets and alleys of Brazil’s favelas are tricky or impossible to traverse by car, making them difficult to map through Google Map’s traditional vehicle-based system. Additionally, fears of crime have kept outsider camera crews from attempting a pedestrian mapping effort. So most Rio favelas appear as blank spots on Google Maps, as if they do not exist. Even if non-residents wanted to visit, they would have no way of finding their way around, let alone locate a business, leaving favela residents in economic isolation. In an attempt to remedy this, AfroReggae is equipping favela locals with cell phones and training them on Google mapping technologies. The project is called “Tá no Mapa” (it’s on the map).

“The mappers are all recruited from the communities,” says Ronan Ramos, a project manager at AfroReggae. “They know the streets, alleys, squares, small business and other interesting locations that they want to show, and they are proud to put the their community in the digital world.”

So far, the project has mapped 25 favelas since efforts began in 2014, pinpointing local businesses and institutions, such as grocery stores, schools, bars and restaurants. Organizers expect to complete 30 by the end of the year. While this is only a fraction of Rio’s 1,000-some favelas, AfroReggae believes it’s making a big difference. According to Ramos, favela residents, historically viewed as outcasts by many non-favela residents, are beginning to feel that they’re part of the wider community.

“They can see their own place on the internet the same way a person in the "asphalt" [a term for non-favela areas] can be seen,” he says.

Mapping the areas could also have practical benefits, such as allowing ambulances and other emergency personal to find locations, or to make it easier to install services like sanitation.

Non-favela residents will also benefit from having cultural stereotypes broken down, Ramos says. Favelas are often viewed as being culturally, economically and technologically disconnected from the rest of the city, when many argue they’re not as different. According to studies reported by Catalytic Communities, a nonprofit dedicated to improving quality of life for favela residents, most favela homes are made out of solid materials like brick and steel (in contrast to their shantytown image), at least 9 out of 10 young favela residents are connected to the internet, and nearly two-thirds of favela residents are considered middle class by Brazilian economic standards.

While some favelas do have high drug and crime rates, others are considered “pacified,” or equipped with a community police force that has driven down crime. The project began with the more pacified favelas. Yet, according to these studies, only 14 percent of those who had never visited a favela have a “favorable” perception of favelas as a whole, and 64 percent describe their perception as “unfavorable.”

With Tá no Mapa, non-favela residents will “start to see the good things there and not only the information of violence produced by media,” Ramos says.

As local favela businesses begin to appear on Google Maps, Tá no Mapa proponents hope outsiders will consider shopping there, boosting the local economy. Rather than viewing the favelas as impenetrable, mysterious slums, they’ll start to see them simply as local neighborhoods.

On Google Maps, here are before and after images of a section of Rio's largest favela, Rocinha. (Google)

Mapping the rest of the city’s favelas won’t be easy. Some of the pacified favelas have been experiencing increased crime rates of late, despite government efforts to shore up security ahead of the Olympics. And project members have yet to extend into some of the city’s more dangerous ones.

But as the eyes of the world turn to Rio next month, mappers hope their efforts will help make the favelas a little less mysterious, and a little bit more a part of the fabric of everyday life in this vibrant metropolis.

SI Center for Learning and Digital Access
Activity in which students examine the ways in which their community consumes media. They observe, photograph, and map media messages in their community.

Geologic mapping is an integral part of exploration and understanding a planetary landscape, because it shows the relationships between geologic units and helps delineate the […]

Geologic mapping is an integral part of exploration and understanding a planetary landscape, because it shows the relationships between geologic units and helps delineate the […]

The surface of Venus is hidden beneath a perpetual blanket of clouds, but radar allows scientists at the National Air and Space Museum to […]

National Air and Space Museum
This is the flight backup for the mapping cameras used on the last three Apollo missions. Mapping the lunar surface was a high priority during Apollo 15, 16, and 17. Mounted in the service module, the mapping camera captured high-resolution images of the Moon as the spacecraft orbited. While returning to Earth, command module pilots performed spacewalks to retrieve the film canisters, mounted on the right side of the camera.

This flight backup, available for those missions if the installed cameras were damaged or malfunctioned before launch, is the best surviving example of the Fairchild-built camera. The flown versions remained in the service modules, which burned up when they reentered the Earth's atmosphere.

This camera was transferred from NASA to the Museum in 1978. 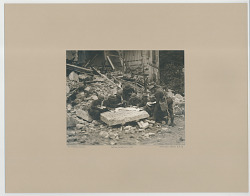 Geological mapping of another world

Mapping How the Brain Thinks

"Is there anything left to be said about Edward Hopper? Poet of light, documentarian of alienation, isolation, angst, stasis, human disconnection and impotence?" art historian Kevin Salatino asked at the start of his talk, Edward Hopper and the Burden of (Un)Certainty the first of this year's annual Clarice Smith Distinguished Lectures in American Art. 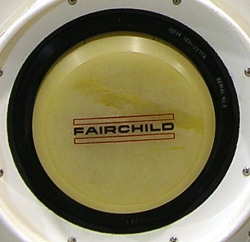 National Air and Space Museum
This is the lens cap to a lunar mapping camera, certified as the flight backup to those used on the last three Apollo missions. Mapping the lunar surface was a high priority during Apollo 15, 16, and 17. Mounted in the service module, the mapping camera captured high-resolution images of the Moon as the spacecraft orbited. While returning to Earth, command module pilots performed spacewalks to retrieve the film canisters, mounted on the right side of the camera.

This flight backup, available for those missions if the installed cameras were damaged or malfunctioned before launch, is the best surviving example of the Fairchild-built camera. The flown versions remained in the service modules, which burned up when they reentered the Earth's atmosphere.

NASA transferred this camera lens cap to the Museum in 1978. 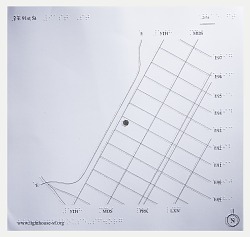 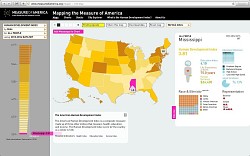 Mapping the Measure of America

SI Center for Learning and Digital Access
Website about the history of the Lewis and Clark expedition. Includes an extensive retelling of the expedition, Lewis and Clark maps and other primary resources, related activities and lesson plans, and biographies of historic figures.

Mapping it! Field Books and Maps

National Museum of Natural History
(In honor of National Volunteer Appreciation Month) The Field Book Project catalogs a wide range of field book formats. In fact, you can find more than 30 different types of field book contents in the Field Book Registry catalog. Maps are one of my favorite types. Over the years we’ve...
1-24 of 12,860 Resources