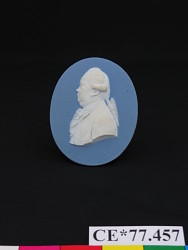 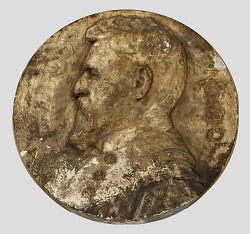 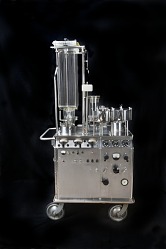 National Museum of American History
The invention of the heart-lung machine is one of the most significant contributions in the history of cardiac surgery. These machines are used to temporarily replace the function of the heart and lungs, supporting the circulation of blood through the body. The natural heart is by-passed and the heart-lung machine takes over for the patients organs. 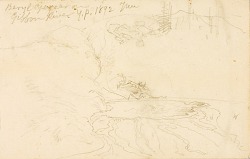 Gibbon reaching for reflection of the moon

The 2,200-year-old tomb of Lady Xia, the grandmother of China’s first emperor Qin Shihuang, basically contains a zoo. Originally found in 2004, the tomb's dozen pits hold the bones of cranes, a lynx, a leopard, and an Asiatic black bear, among other animals. It also contained an unusual gibbon skull. Now, reports Maya Wei-Haas at National Geographic, researchers have determined that the gibbon is from an unknown and now extinct genus of the animal.

In 2009, gibbon expert Samuel Turvey of the Zoological Society of London (ZSL) was touring a museum in China when the fossil skull caught his eye, reports Karen Weintraub at The New York Times. It looked slightly different from the skulls of other gibbons, so the ZSL and University College London evolutionary biologist Helen Chatterjee decided to take a closer look to figure out just what species of gibbon it was.

The team created a database of skull and teeth dimensions from the four known genera of gibbons, the world’s smallest apes, measuring 789 teeth and 477 skulls. They then compared the Chinese fossil with that database, finding that in the Chinese fossil, the brain is larger, the cheekbones are narrower and that the grinding surface of its molars are larger.

The differences are enough to declare the animal a previously unknown genus and species of gibbon, dubbed Junzi imperialis. The description appears in the journal Science.

Colin Barras at Nature reports that other than those characteristics, researchers know nothing about the gibbon, like where it fits in the gibbon family tree, whether it came from China and why it went extinct.

Not everyone is convinced, however, that Lady Xia’s gibbon represents a new species. Terry Harrison, a biological anthropologist at New York University, tells Barras that it’s possible the "new species" was a captive animal. Captive animals often show growth abnormalities.

DNA analysis might have been able to solve the mystery, but the fossil was too fragile and museum officials would not allow the team to take a sample.

If it is a new species, its extinction is its most significant trait. Though ape species are under tremendous pressure from human activity, researchers believe we have not yet caused the extinction of any ape. It’s possible that Junzi changes that. “Our discovery and description of Junzi imperialis suggests that we are underestimating the impact of humans on primate diversity,” lead author Turvey says in a press release. “These findings reveal the importance of using historical archives such as the archaeological record to inform our understanding of conservation and stress the need for greater international collaboration to protect surviving populations of gibbons in the wild.”

Wei-Haas reports that the fossil suggests that gibbons may have lived in central China 2,000 years ago. According to historical records, they disappeared from the area around 300 years ago, when their forest habitats were cut down to create more agricultural land. Trapping and the pet trade may have also doomed them. “There was the idea that apes in the past have been somewhat resilient to anthropogenic pressures and incidental habitat loss,” co-author Alejandra Oritz of Arizona State University says. However, the loss of Junzi proves otherwise.

Many of the same pressures are pushing the remaining gibbon species, which live in eastern and southeast Asia including China, to the brink as well, with deforestation and the pet trade having huge impacts. “What we can start to see is that [modern gibbon species are] a relic of what was perhaps a much wider radiation of gibbons and primates across Asia,” James Hansford of the Zoological Society of London tells Wei-Haas. “We’ve lost more and more and more of them. We can't even quantify what we lost because we don't have the records of it.”

“The broader message is that we might have underestimated the number of primate extinctions caused by humans in the past,” Jo Setchell, president of the Primate Society of Great Britain tells Weintraub. “Understanding past extinctions will help us to predict how vulnerable current species are, and therefore help us to protect them more effectively.”

In fact, the 20 extant species of gibbons are some of the most endangered animals on Earth. The Hainan gibbon, discovered two years ago on China’s Hainan island, is the rarest mammal in the world, with only 25 animals remaining. The Skywalker gibbon, also native to China, was just discovered in the Gaoligong mountains last year and is also considered endangered. 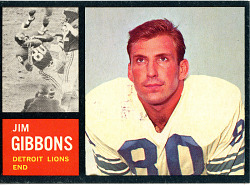 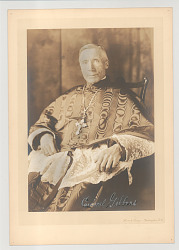 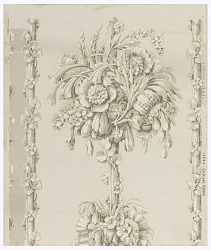 Cooper Hewitt, Smithsonian Design Museum
Reproduction of an early 19th century wallpaper which was inspired from wood carvings of Grinling Gibbons made in 1st quarter of the 18th century. Elaborate bunches of flowers and grain repeat themselves on an upright continuous stem. At either side are two parallel straight stems entwined with a flowering vine. When on wall these stems form vertical borders between central motifs. This paper has been used on the hall walls of the Pingree House, in Salem, Massachusetts. Printed in selvedge: "Zuber and Cie Alsace, 10804, Grinling Gibbon."

Saving the Cao Vit Gibbon, the Second Rarest Ape in the World You probably haven’t heard of the world’s second rarest ape, the cao vit gibbon. Scientists know of only one place the species still lives in the wild. In the 1960s, things got so bad for the cao vit gibbon that the species was declared extinct. But in 2002, to the surprise and elation of conservationists, the animals—whose shaggy coats can be a fiery orange or jet black—turned up along Vietnam’s remote northern border. Several years later, a few gibbons were found in China, too.

Also known as the eastern black-crested gibbon, the cao vit gibbons once covered an expanse of forest spanning from southern China and northern Vietnam just east of the Red River, but today only about 110 individuals survive. This gibbon is highly inclined to stick to the trees—in a previous study, during more than 2,000 hours spent observing gibbons in the field, researchers saw only once and very briefly one young male cao vit gibbon come down from the canopy and walk on a rock for a few seconds. Population surveys based on watching the animals in the branches reveal that the gibbons live in 18 groups scattered throughout the area. That makes it the second least populous species of ape, just after the Hainan gibbon, another type of extremely rare gibbon living in the same area of Asia.

In 2007 and 2009, Vietnam and then China hustled to establish special protected areas dedicated to preventing the cao vit gibbon’s extinction. Much of the area surrounding the remaining populations of gibbons is quickly being converted to agricultural fields and pasturesor cut down to make charcoal to sell and use at home, a common practice in the area. Hunting—though illegal—is also an issue, as exotic wild meat dinners are popular with locals in the region.

For an endangered species to recover rather than just survive, it needs to grow in numbers. But any given patch of land can only support so many animals given the amount of food and space that’s available. If populations exceed this threshold—called a carrying capacity—then animals will either starve, get picked off by predators or have to move somewhere else.

Researchers from Dali University in Yunnan, the Chinese Academy of Sciences in Kunming and the Chinese Research Academy of Environmental Sciences in Beijing wanted to find out how much of the protected forest the cao vit gibbons had expanded into, and also how many animals that pocket of land could eventually support. To answer this question, they turned to high-resolution satellite images, describing their results in the journal Biological Conservation.

Once they acquired aerial images of the gibbons’ habitat, they classified it into forest, scrub, shrub land and developed areas. This was important because gibbons can only live high in forest canopies, meaning the latter three categories were out of bounds for potentially supporting the animals. Overall, the area could be divided into five different zones that were split apart by either roads or rivers. From there, the researchers plugged the data into computer models that ranked possible gibbon habitat from high to low quality. Their results revealed several bits of news, some good and some bad. First, from the models it seems that 20 groups of gibbons could eventually live in the protected forest areas before the population reaches its carrying capacity threshold. However, as human development creeps closer and closer, that disturbance could lower that figure. As things stand, the gibbons will likely reach their carrying capacity in the current habitat in 15 years, which doesn’t bode well for building up the species’ numbers.

There are a couple options. The protected area isn’t all great habitat, it turns out. Some of it is just mediocre for gibbons. If that span of forest could be improved, it could eventually support up to 26 groups of animals. The researchers also identified two other potential areas where gibbons could live if they could somehow manage to travel there (no gibbon has ever been known to cross a river or a road). But these patches of welcoming forest, located in Vietnam, are not protected, so they likely will not remain forests for long. If the government decided to protect those areas, the researchers write, they could serve as places for cao vit gibbons to live in the future, especially if narrow corridors of trees connecting the two areas were protected and restored as well.

If these patches of forest were protected, gibbons would not be the only species to benefit. Numerous other species of primates and monkeys, civets, pangolins, porcupines, birds, bats and many more depend upon those last remaining jungle habitats for survival. “In summary, the last remaining population of cao vit gibbon is nearing its carrying capacity in the current remaining forest patch,” the authors write. “Forest protection and active forest restoration using important food tree plantings to increase habitat quality and connectivity should be the most critical part of the ongoing conservation management strategy.”

National Portrait Gallery
Ordained a Catholic priest in 1861 and made a cardinal in 1887, James Gibbons was one of the most influential clerics of his day. While "he reigned in Baltimore like a king," a British admirer once wrote, "he met every man like a comrade." Gibbons's success in preventing papal condemnation of Catholic laborers participating in the Knights of Labor's struggle for improved working conditions was characteristic of his commitment to the working man. He was also instrumental in maintaining unity in an increasingly diverse American Catholic Church by promoting the acculturation of its foreign-born membership. A friend to several presidents, Gibbons was often called on for counsel on issues ranging from tariff policy to the acquisition of the Philippines. French artist Theobald Chartran's portrait of Gibbons captures the warmth that accounted in large part for his wide influence. 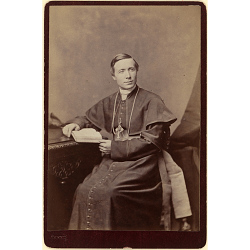 Exploration of the valley of the Amazon, made under the direction of the Navy Department, by Wm. Lewis Herndon and Lardner Gibbon ..

Exploration of the valley of the Amazon, made under direction of the Navy Department, by Wm. Lewis Herndon and Lardner Gibbon .. 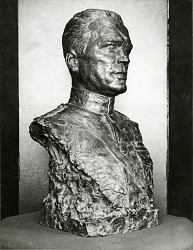 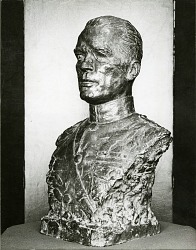 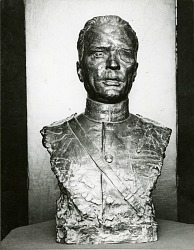 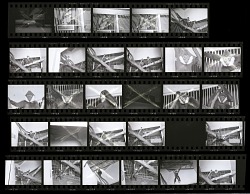 Requested from Photographic Services Division by the National Zoological Park. 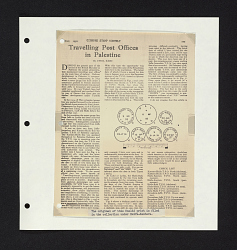 Two Gibbons in a Tree

Landscape with Gibbons and Cranes