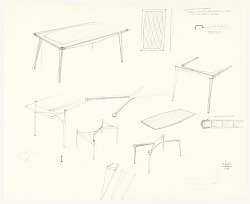 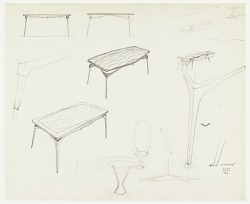 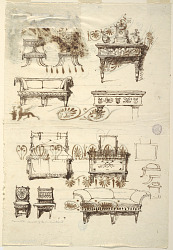 Cooper Hewitt, Smithsonian Design Museum
Page with furniture designs. At bottom, two chairs and a couch. Above, a bed and dresser. At top, two chairs, two tables and a couch. 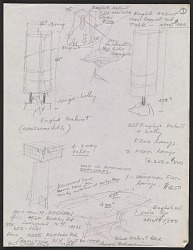 Furniture Design: Elevation of a Pedestal or Case

Cooper Hewitt, Smithsonian Design Museum
The left half of the elevation of a pedestal or of a case. At center, on a bracket, a girl kneels. 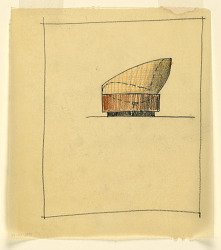 Cooper Hewitt, Smithsonian Design Museum
Design for a piece of furniture, inside a graphite border. 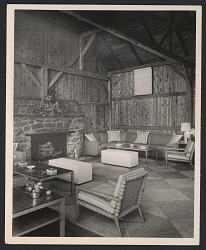 Identification on attachment (typewritten): Residence in Connecticut; all furniture in walnut, specially designed and made to order by T.H. Robsjohn-Gibbings. 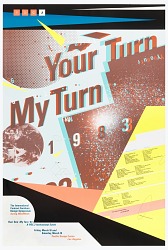 During a recent trip to Paris, I visited the former apartment of Victor Hugo, poet, novelist, playwright, and, as it turns out, furniture designer. But more on that last part in a minute. The apartment, located on the Place Des Vosges, was Hugo’s home from 1832 to 1848 and is now a museum dedicated to the author of Les Misérables and Notre-Dame de Paris. During the 165 years that have passed since Hugo moved out of the building into exile, the apartment has been renovated countless times and is today a strange amalgam of his various homes in France that has been partially reconstructed based on the recollections of his floor polisher. That's right, his floor polisher. Who better to recall the layout of an apartment than the man whose job it was to walk through it?

Relatively sparsely appointed, the red room is furnished to evoke the atmosphere of the apartment when Hugo lived there. However, the original space was actually two rooms: a dining room and an entry foyer. Hugo’s bedroom at the Place des Vosges apartment is in its right location, the bedroom itself is a faithful reconstruction of the bedroom from a different Hugo residence at 130 Avenue d'Eylau, where he died in 1885.

Throughout the house there are Hugo’s drawings, letters, first editions of his books, and his custom made furniture on display. Hugo would find various pieces of furniture he liked and would work with carpenters to combine them into single pieces. The results were stylistically eclectic and, as evidenced by his stand-up writers desk, which seems to be made from a standard desk and a coffee table, seemed to be uniquely suited to accommodate his own habits and eccentricities.

Hugo’s Paris apartment--a real place that is, at the same time, not real--reminds me of the London flat shared by Sherlock Holmes and John Watson. 221B Baker St. is, as I previously described, a fictional flat in a real city made real at a fictional address in the real city near the real address of the fictional flat.

Like Holmes’s flat, Hugo’s apartment is a fiction-made-reality that favors an abstract representation of its famous tenant over a historically accurate reproduction of a space. Of course, unlike Holmes, Victor Hugo was a real person. So there are more accurate first-hand accounts to draw from and an entire life's worth of work and changing personal taste that can serve as inspiration. That just makes it more fascinating. And more challenging. A museum like the Maison de Victor Hugo, taken as a whole, represents not a single, frozen point in time, but an idea of what life was like for the occupant. It’s an almost impressionistic form of preservation. 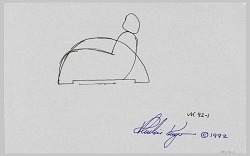 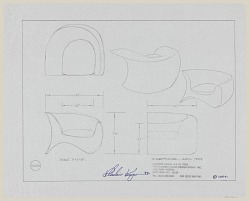 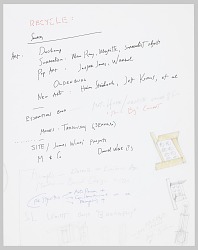 Cooper Hewitt, Smithsonian Design Museum
This paper shows a list of names of several twentieth-century artists in black and blue ink and graphite. On the lower right, there are drawings in colored pencil of cupcake pans. 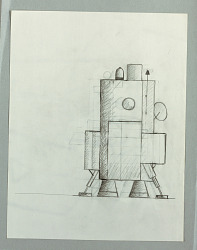 Design for Furniture in Robot Form

Cooper Hewitt, Smithsonian Design Museum
At lower right of sheet, robot-like form stands on two wire legs with pod-like feet and two cones between feet. Upper section comprises a series of vertical and horizontal rectanges with an extending, circular arm or mirror at right; on top a bell-like form, a square, and an arrow pointing up. 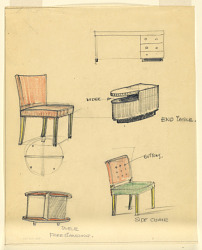 Cooper Hewitt, Smithsonian Design Museum
Various designs for chairs, tables, and a desk, at differing angles, scattered around the page. Near several of the designs are titles and/or notes, inscribed in handwritten graphite. 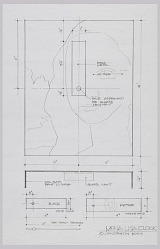 Cooper Hewitt, Smithsonian Design Museum
A scale drawing of the head of a woman for a clock. Below, plan of details for the clock. Text in graphite throughout. 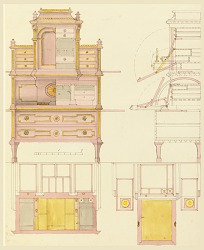 Cooper Hewitt, Smithsonian Design Museum
Upper left, front elevation of a desk. Upper section with center having flap opening to a compartmented interior with drawers and pigeon-holes, flanked by two lower sections with short drawers; center with flap opening to another series of compartments, and fitted for writing; below, two long drawers on legs. Upper right, details of construction, sections at two levels, shown from above. Scale at left. 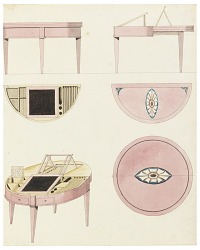 Cooper Hewitt, Smithsonian Design Museum
A half-round table fitted with hinged top, under which are fittings for a writing table; plans, elevations and isometric. An almanac on desk dated 1805. 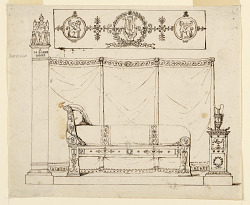 Cooper Hewitt, Smithsonian Design Museum
Design for an Empire style bedroom. At center, a couch with one scrolling arm stands on a platform. At right, a classical stand with an ewer. At left, a column inscribed “la bonne desse” (the good goddess). Atop this, an enthroned woman. Behind, are three panels of drapery separated by standards with lion masks. Above this, a horizontal panel with a lyre within a laurel wreath. 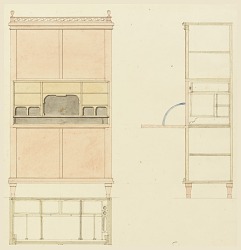 Cooper Hewitt, Smithsonian Design Museum
Design for a secretary desk with a fall-front on hinges, and cabinets above and below. Elevation at left with desk open, revealing the inner compartments. At lower left, detail of construction, section through top. At right, side elevation, showing construction details. 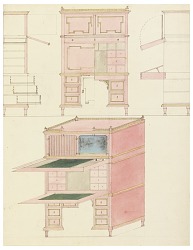 Cooper Hewitt, Smithsonian Design Museum
A secretary with double fall-front, one above the other, showing alternative treatment of kneehold base; elevation, two sections, and isometric. 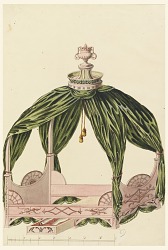 Cooper Hewitt, Smithsonian Design Museum
A canopy tent bed surmounted by an urn. Underneath, a drawer for chamber pots, exposed. Bed decorated with batwing fan and bow, arrow and quiver motifs. Scale below. 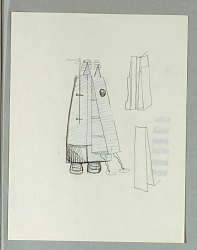 Design for Furniture in Robot Form with Two Details

Cooper Hewitt, Smithsonian Design Museum
Robot-like vertical structure, composed of tall, triangulalr forms, stands on two pod-like feet in front and two cone forms behind. Figure appears to hold flag and wears two pyramid forms on top. To the right, two details of structure viewed from the side.
1-24 of 12,210 Resources