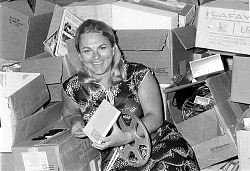 The original negative number is 78-14896-7A, but that negative could not be found on file. The original photograph was re-scanned and given new negative and digital file numbers.

Dorothy Neumann, the supply coordinator for the 1978 Festival of American Folklife.

Fifty years ago, the roots of the Smithsonian Folklife Festival were planted on the National Mall, featuring traditions of people from around the United States and the world. At the first Festival, banjo-pickers and ballad singers performed alongside Navajo sand painters and basket and rug weavers, to the delight of thousands of visitors. This four-day event in July 1967 started a yearly tradition, answering the call from former Smithsonian Secretary S. Dillon Ripley to “take the instruments out of their cases and let them sing.”

On July 8 and 9, 2017, a series of discussion sessions took place as part of the Festival’s 50th Anniversary Reunion Weekend. As a fall intern, I was assigned to transcribe the sixteen discussion sessions and a series of oral interviews, naïve to the foundational roots of the Festival. What I’m beginning to learn is that its roots run deep in Washington, D.C., and at this institution. Once the roots burrow into you, they plant seeds of inspiration that will germinate and grow.

After listening to the Reunion Weekend sessions, I’ve found that the metaphor of “roots” permeates all aspects of the discussions as well as the oral histories. I imagine these roots as Festival staff spreading outward from a core tree trunk, established by founding director Ralph Rinzler, to provide strength, endurance, and longevity. The purpose of the weekend was not only to reminisce on the past fifty years, but to turn the discussion toward the future of the event.

“Ralph was always looking for root traditions, the origin of that tradition,” Jeffrey LaRiche, former program coordinator, stated in the session entitled “The Vision and Legacy of Ralph Rinzler.” “I think that legacy is still seen in the Festival today.”

The metaphor of the family tree was strongly emphasized during the penultimate session, “From Research to Realization.” In the early years of the Festival, Ralph worked with eminent scholar and activist Roy Bryce-LaPorte. His daughter, Camila Bryce-LaPorte, has worked with the Center off and on since the late 1980s, most recently producing a Caribbean music segment for the 2017 On the Move program. Camila’s teenage son, Michael, was a participant in the 2013 Will to Adorn program and On the Move.

The family tree isn’t limited to Festival staff. Participants have set down roots at some of the earliest events and are watching them spread throughout years of Festival programs. At the Reunion Week’s oral history interview sessions, Pam Henson, director of the Institutional History Division at Smithsonian, interviewed not only staff but visitors and participants too.

Participant Sheryl Sturges told Pam, herself a long-time staff member and branch of the Festival tree, the story of her grandfather’s first cousin, Arthur Sayler. Arthur and his family participated in the 1991 Festival to demonstrate lime stone fence post carving at the Family Farming in the Heartland program. Fast forward to 2017, and Sheryl’s daughter, Sara Deull, performed trapeze acts in Circus Arts.

“It’s an unusual genealogy,” Sheryl said. “There are strong people in Kansas that can do anything, and you never know from what roots the direction in which you will go.”

This was just one of a handful of family seedlings from the Reunion Weekend activities, and Sheryl said she looks forwards to cheering on her grandson in his pursuit of juggling and trapeze arts. Maybe he, too, will one day land at a future Folklife Festival.

Intergenerational narratives can also be found in stories passed from the roots of the Festival to the new branches continuing the legacy and tradition. Amalia Cordova, the Center’s newest curator, explained in the “Boldly into the Future, Some New Voices” discussion session: “I’ve heard the lore from previous Festivals, and it helps me navigate and plan future Festivals.”

When the next generation of Festival staff and volunteers arrive, they too will receive the lore and become part of the family. People and programs that land, germinate, and grow are welcomed onto the National Mall and into the family so deeply that “there will always be a place for everyone to belong,” said Angelica Aboulhosn, former public affairs specialist.

While I learned a great deal about the history and future of the Festival from transcribing the 50th anniversary discussions and interviews, I have also seen the “family dynamics” play out in real time. The weekend of October 14 and 15, 2017, the Festival co-presented IlluminAsia, the reopening event for the Smithsonian’s Freer | Sackler Galleries. Everyone at the Center, including myself and other interns, jumped in to help with pre-event logistics, crowd control, and assisting participants with navigating the event site, ensuring a successful time for all involved. Just like at a family reunion or at a Folklife Festival, Center staff came together to help out and foster a successful, engaging event.

Looking into my own future, no matter where I go over the next few years while pursuing more education, I fully expect to return to the Center to continue to serve as a volunteer at the Festival. I know I will be welcomed back into the family to further strengthen the programs—and to continue to pass the lore onward.

Taraya Middleton is an intern at the Center for Folklife and Cultural Heritage, finishing her post-baccalaureate practicum in heritage resource management. She is from Alberta, Canada. 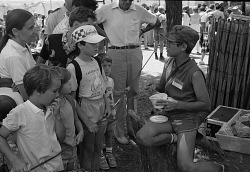 Junior volunteer John McCauley demonstrates marblemaking to onlookers at the 20th Festival of American Folklife, in the Summer of 1986. 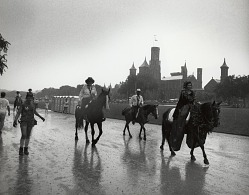 Hawaii was the featured state in the 1989 Folklife Festival from June 23 - July 4. Hawaiian participants are seen here riding horses in a traditional Pa'u parade, down the National Mall, with the Smithsonian Castle behind them, during a downpour. 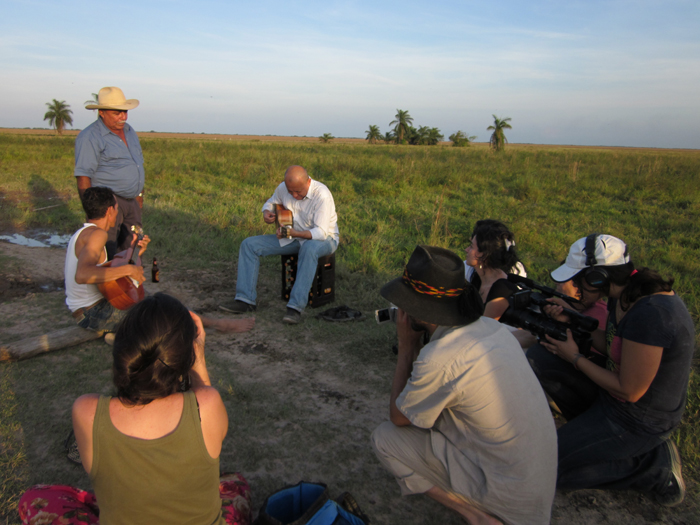 Talented curatorial teams are quickly moving forward with plans for the 2011 Smithsonian Folklife Festival. Steve Kidd, who directs the Festival, comments on the three stories that will unfold on our nation's front lawn:  "This year's Festival highlights Rhythm and Blues, featuring performances by contemporary musicians representing the regional hearths of this very American form of creative expression. We are also very excited about the Colombia program that captures the vitality, warmth and ingenuity of the peoples of Colombia, who have forged their community-based traditions through their relationship with the environment. Festival visitors are invited to view demonstrations in basket weaving and guadua (bamboo) construction, and we especially welcome Colombian Americans to join us for these dynamic programs. Finally, the Peace Corps program tells an enduring story of cultural exchange by focusing on cultural traditions that helped Peace Corps Volunteers better understand the communities in which they served."

We warmly welcome your visit and participation in the 2011 Smithsonian Folklife Festival this summer, and until then, we look forward to sharing stories each week about some of the talented tradition bearers you will have an opportunity to meet at the National Mall.

Van Luong is the festival blogger for the 2011 Folklife Festival. 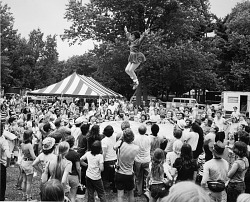 The 1974 Festival of American Folklife contains programs on Working Americans, Native Americans, and Old Ways in the New World, including Scandinavian and Greek culture, and Mississippi. The Festival is held on the National Mall and jointly sponsored by the National Park Service.

On Saturday, June 23, the volunteers for the 2012 Smithsonian Folklife Festival came to the Mall for their annual orientation. Every year, many dedicated members of the public volunteer their time and energy—helping with everything from Festival accessibility to the evening concerts. This summer, more than six hundred volunteers will work with staff and participants; the Festival simply would not be possible without them.

Festival volunteers typically represent a wide range of ages and interests, and must be at least sixteen years of age to apply. This year, volunteers are coming from places as far away as Ghana, England, and Wales!  Many volunteers are veterans, who return every summer to help out with the Folklife Festival. Currently we have thirteen volunteers who have been helping out for more than twenty years. One of the longest-serving volunteers is retired school teacher Joan Paull, who is back for her thirty-seventh time with the Festival! Joan began volunteering in 1975, after first visiting the Festival. When asked if she has a favorite memory, she exclaimed, “You can’t ask that question! Every Festival has some outstanding wonderful, performance.” Some of her favorite moments from past Festivals include a camel that escaped from an enclosure in 2005, a buffalo that gave birth in the middle of the Mall, and the Dalai Lama’s visit in 2000.

Why do people volunteer at the Festival? Joan believes that her experiences with us have inspired her to travel around the world, and that the Folklife Festival has “not only been a springboard to me, but has also allowed me to broaden my own horizons.” She loves exploring new cultures, meeting new people, and having the opportunity to learn from them directly. This is the same reason why the Folklife Festival is such an exciting experience for many visitors: the Festival allows communities to speak for themselves as they share their cultural traditions, and encourages visitors—and volunteers—to engage with living cultures and their practitioners from around the world.

James Mayer is an intern at the Smithsonian Center for Folklife and Cultural Heritage.  He recently graduated from Macalester College, where he studied History and Classics. 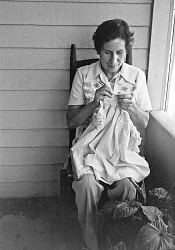 Visitors, volunteers, and staff who make the Smithsonian Folklife Festival an annual event in their lives often collect Festival T-shirts. Here are photos of  T-shirts from the past. Most of the ones shown are from the collection of Arlene and Pete Reiniger, both staff at the Smithsonian Center for Folklife and Cultural Heritage.

At the July 3-14, 1974 Festival of American Folklife, Native Americans section, a woman participates in the blanket toss, a game in the World Eskimo Olympics. 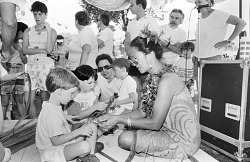 Smithsonian Archives - History Div
At the 1989 Festival of American Folklife, visitors look on as a participant from Hawaii demonstrates crafts to children. 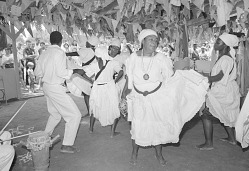 Smithsonian Archives - History Div
In the 1989 Festival of American Folklife -- The Caribbean: Cultural Encounters in the New World', visitors look on as Festival participants demonstrate a dance associated with Haitian Voodoo ritual.

Smithsonian Center for Folklife and Cultural Heritage
Founded in 1967 the Smithsonian Folklife Festival is an annual event on the National Mall in Washington, D.C. that brings participants from around the world. Narrated by Ossie Davis Edited by Aurélie Beatley [Catalog No. CFV10467; Copyright 2012 Smithsonian Institution]

Smithsonian Center for Folklife and Cultural Heritage
Welcome to the forty-eighth annual Smithsonian Folklife Festival. This year we celebrate the cultures of Kenya and China. With over 120 participants from each country, this Festival is brought to life by thousands of staff, interns, and volunteers. I encourage you to join us either on the National Mall or online and explore all that these wonderful artists have brought to us. It's my great pleasure to welcome you for the next two weeks of exploration, exchange, and engagement. Videography and Editing: Albert Tong Narration: Sabrina Lynn Motley [Catalog No. CFV10647; Copyright 2014 Smithsonian Institution] 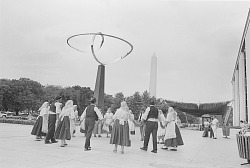 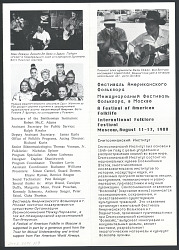 Hirshhorn Museum and Sculpture Garden
This video is about Folklife quest #2 Hungarian Heritage
1-24 of 5,448 Resources