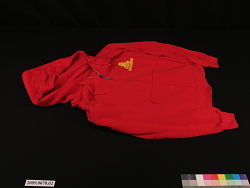 Can you name five women artists? For plenty of people, the answer is no—a fact the National Museum of Women in the Arts (NMWA) is actively trying to change. Every March since 2016, the Washington, D.C.-based institution has celebrated Women’s History Month by rolling out its #5WomenArtists campaign, which strives to combat gender inequity in the arts through the power of social media. This year’s showing is especially strong, with 272 museums, gallery spaces and other art-focused mainstays joining forces to rally behind the hashtag’s mission, reports Monica Castillo for Hyperallergic.

A stroll through most of the cultural institutions that dot the Western world is all it takes to underscore the severity of the issue. Though women make up nearly half of visual artists in the United States, they represent a meager 13 percent of artists in the permanent collections of prominent American museums. On average, they also earn 26 percent less than their male colleagues—a disparity exacerbated by advanced age, according to the NMWA website. The numbers are even worse for women artists of color, who comprise just 5.6 percent of creatives featured in galleries, per Hyperallergic.

This gross underrepresentation gives the public “a warped or limited view of our history,” Sydney-based arts consultant John Cruthers told the Guardian’s Clarissa Sebag-Montefiore last year. “By having so few women, you miss out on a big part of the story.”

The male-centric skew isn’t simply a product of history. Despite being barred from academic institutions—and even from studying nude models—for centuries, women artists persevered and produced around the world, only to be written out of textbooks and snubbed by collectors. (Of the 300-plus artists mentioned in Janson’s Basic History of Western Art, a staple in many art history classes, only 8 percent are women, and less than 1 percent are women of color.)

Since opening its doors in 1987, the NMWA has acquired some 4,500 works by more than 1,000 artists spanning centuries and continents. In recent years, the museum has expanded its mission to spotlight other inequities and inequalities facing women in the arts. Its current run of #5WomenArtists centers on socially conscious artworks intended to raise global awareness about such issues as climate change, racial justice and LGBTQ+ rights.

Among those featured is Mexico City-based artist Mónica Mayer, whose pieces have reclaimed the clothesline—a traditionally feminine object linked to domesticity—as a powerful tool to spark discussion about sexual harassment, domestic violence and human trafficking. In 2017, she debuted a temporary NMWA installation called El Tendedero/The Clothesline Project; the display prompted visitors to voice their dislikes about their hometowns on small pink ballots that were then pinned to clotheslines.

Also highlighted on the NMWA website is Jaune Quick-to-See Smith, an enrolled member of the Confederated Salish and Kootenai Tribes of the Flathead Indian Nation in Montana. She is known for infusing her work with Native American art forms and illustrating the longstanding suppression of native cultures.

With nearly 300 other institutions—including the Smithsonian’s National Portrait Gallery, the Guggenheim Museum, Museu de Arte Sacra de São Paulo and the Toronto International Film Festival—contributing to this year’s #5WomenArtists campaign, other examples abound online. On Twitter, the hashtag has been attached to figures including Augusta Savage, the only black woman artist to contribute to the 1939 New York World’s Fair, and Shi Hui, who has garnered acclaim for her eclectic, fiber-based sculptures.

The goal, perhaps, is to craft a reality in which the hashtag may no longer be necessary. Until then, initiatives like #5WomenArtists will hopefully inspire people to “turn [their] gaze inward,” California dealer Ashara Ekundayo told the Art Newspaper’s Rochelle Spencer last year. After all, she says, “the work that women create, and the institutions we build and steward, are containers for celebration and ceremony.”

And that’s not a thing to waste. 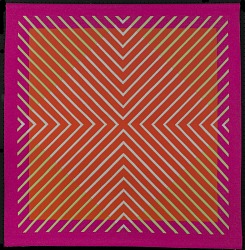 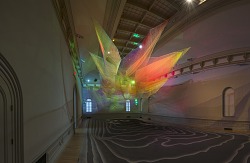 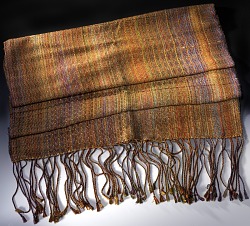 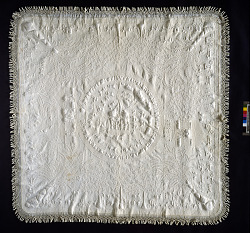 National Museum of American History
Virginia Ivey designed this white-work quilt to capture the excitement and lively interest of a county fairground in the mid-nineteenth century. The center circle, 40 inches in diameter, is edged by a board fence complete with gate. Inside the fence is the quilted inscription: "1856 A REPRESENTATION OF THE FAIR GROUND NEAR RUSSELLVILLE KENTUCKY." The central judges' pavilion with the judges, encircled by horses and riders, fair buildings and workers, animals of all sorts, and of course the fairgoers themselves, all in a state of arrested motion, contribute to the unique design.

Virginia Ivey's needlework and artistic skills resulted in a quilt that depicts the smallest details of fence rail, walking stick and saddle, or men shaking hands in greeting. The surface outline was quilted using two layers of fine white cotton with a thin cotton fiber filling, stitched through all three layers. The sculpted effect of the design was achieved with stuffed and corded quilting techniques and grounded with stippling, 12 stitches to the inch. The quilt is finished with a 4½-inch woven and knotted cotton fringe. Her needlework is often described as using needle and thread much like another artist might use pen or brush.

Virginia Mason Ivey was born on October 26, 1828 in Tennessee. She was the daughter of Mourning Mason and Capt. David Ivey, a farmer and soldier in the War of 1812. According to family information her father named her after his native state. When Virginia was a young child the family moved to Keysburg, a small town in Logan County, Kentucky. Aunt Jennie, as she was known to the family, according to her niece Ida B. Lewis, "never had any lessons in art-just-her own talent and creative instinct. She loved beauty in many forms and had a most attractive personality and was quite a pretty woman." Virginia Ivey never married and when she died she left this quilt to her niece, Lillian Virginia Lewis.

"I have a quilt which I value most highly. It was made by my aunt, Virginia M. Ivey. I cannot care for it much longer and I should like very much to know that it will have excellent care and that it will give pleasure to many people who will appreciate its remarkable workmanship and its great beauty". So wrote Lillian V. Lewis about the quilt she donated to the Museum in 1949. Now over 150 years old, this elaborate example of white-work quilting, "A REPRESENTATION OF THE FAIR GROUND NEAR RUSSELLVILLE KENTUCKY 1856," has been exhibited at fairs and museums and has won many prizes. 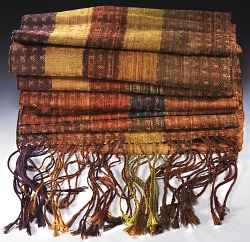 Smithsonian American Art Museum
Von Mertens's series As the Stars Go By depicts the position of the stars at specific violent moments in American history in which "what came before seems separate from what follows." With the aid of a computer, she manipulates empirical data into subjective patterns, making these distant events personal. She then meticulously translates her compositions into fiber, bringing the image forth stitch by stitch on hand-dyed fabric over the course of several months. 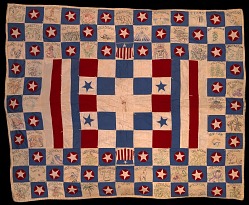 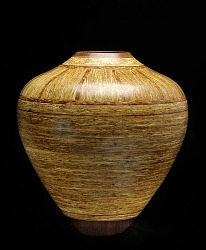 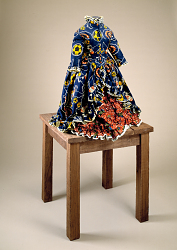 National Museum of African Art
Mannequin of a young girl without a head and dressed in a Victorian style dress made from brightly colored contemporary printed fabric decorated with a soccer ball and flower pattern. 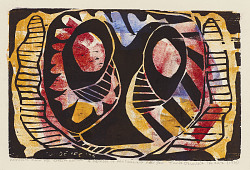 National Museum of African Art
One of seven (7) hand-colored prints of varying sizes from the artist’s Decades of Printmaking series featuring an abstract animal mask in black on a red, yellow and blue textured background.

National Museum of African American History and Culture
Volume 1, Number 2, Winter 1976-77, of Black Forum Magazine. The cover has red and black ink on a white glossy paper background, along with monochromatic photographs of G. Falcon Beazer, John Sanders, Mason A. Cox, and Margarite Gaines, on the right. The left column of the cover indicates the content of the magazine: [In This Issue: / G. Falcon Beazer an Interview / Profiles: / John Sanders, Artists / Mason A. Cox, Poet / Margarita Gaines, Dancer / Notes of a Black Revolutionary / Fiction/ Poetry & Reviews]. The magazine has forty-eight ink on paper pages and includes text, photos, poems, and a crossword puzzle. 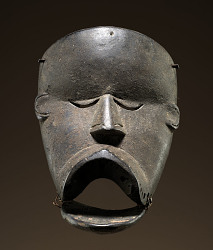 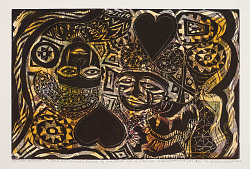 For Your Marriage to Work, First You Must Divorce of Yourselves

National Museum of African Art
One of seven (7) hand-colored prints of varying sizes from the artist’s Decades of Printmaking series, this print features a man and a woman with hearts between them on multiple geometric textures.

House of the head 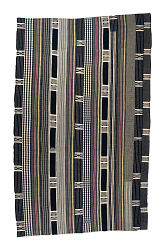 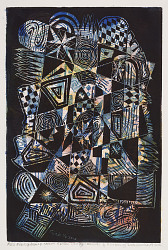 National Museum of African Art
One of seven (7) hand-colored prints of varying sizes from the artist’s Decades of Printmaking series, this print features multiple textures within different geometric shapes on a black background.

National Museum of African Art
One of seven (7) hand-colored prints of varying sizes from the artist’s Decades of Printmaking series featuring a central figure seated cross-legged surrounded by other people, with foliage and houses in the background. The overall print is black, with colored textural backgrounds visible in the negative space of the figures. 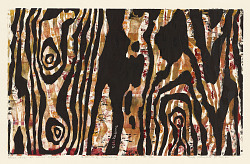 National Museum of African Art
One of seven (7) hand-colored prints of varying sizes from the artist’s Decades of Printmaking series featuring wood grain in black on a colored, textural background. 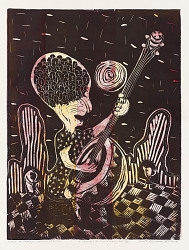 National Museum of African Art
One of seven (7) hand-colored prints of varying sizes from the artist’s Decades of Printmaking series, this print features a seated musician on a black and checkered, likely nighttime, background with many human faces inside of their head. 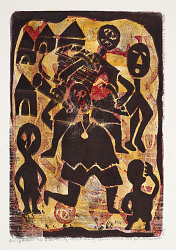 National Museum of African Art
One of seven (7) hand-colored prints of varying sizes from the artist’s Decades of Printmaking series featuring black human figures, a drummer and houses on a red and yellow background. 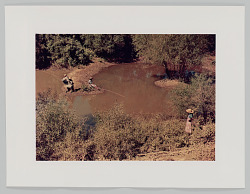 National Museum of African American History and Culture
A dye transfer color photograph of rural life outside of Belzoni, Mississippi by Marion Post Wolcott. At a daytime muddy creek near a cotton plantation, a man and three women fish. They are surrounded by dry foliage and dull green mature trees. Seated along the edges of the creek, the man, crouched, wears a sand-colored hat; bright shirt; dark trousers, and holds a long fishing rod in his proper right hand. Seated to his proper left, arms crossed, is a woman wearing a light-colored long sleeve dress and light-colored wide-brim bucket hat. To her proper left sits another woman, her legs sprawled towards the water. She wears a light-colored wide-brim hat and blouse, and holds a fishing rod. Nearer to the unseen photographer among the dry foliage, at the bottom right of the camera’s frame, stands a woman wearing a long pink dress over a short sleeve shirt and wide-brim hat. She holds a fishing rod in her proper right hand. The back of the photograph, from the top left corner to bottom right, features provenance marks and inscriptions: [RWFA 1868 / PF113003-111 / ARTIST: MARION POST WOLCOTT / TITLE: NEGROES FISHING IN CREEK NEAR COTTON PLANTATIONS OUTSIDE BELZONI MISS. DELTA / TRANSPARENCY DATE: OCT. 1939 / PRINTING DATE: 12/86 / LIGHT GALLERY REG. NO.: 107.8]. Beneath the authentication disclaimer is the signature [Tennyson Schad].
1-24 of 1,914 Resources