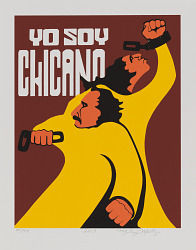 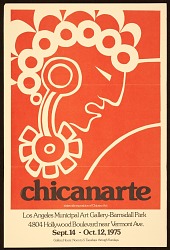 When folded the item has pre-printed return address and prepaid postal information on verso. 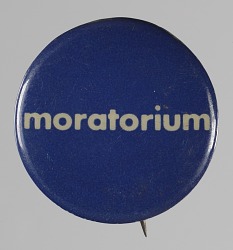 National Museum of African American History and Culture
A pinback button for the anti-Vietnam War National Chicano Moratorium Committee. The button has a blue background with gray text that reads [moratorium]. The exterior edge has a manufacturer's stamp. The back of the button has a metal pin without a clasp and an illegible manufacturer's etching. 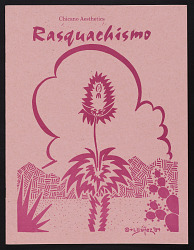 Exhibition announcement for The Chicano Codices 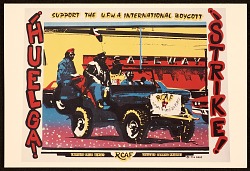 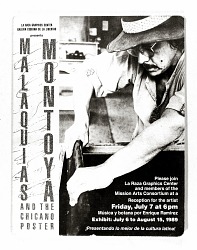 Malaquías Montoya and the Chicano Poster

When folded the item has pre printed return adress and pre-paid postal information on verso. 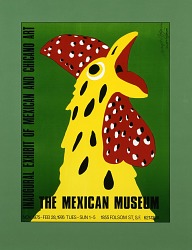 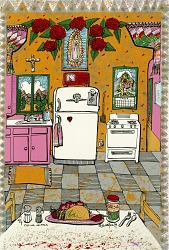 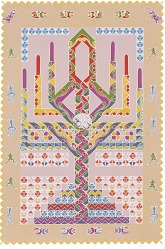 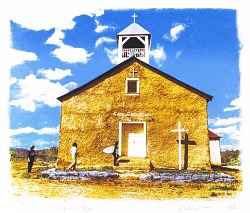 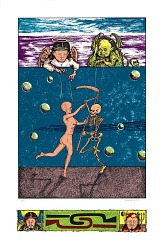 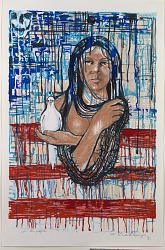 We the People, from the National Chicano Screenprint Taller, 1988-1989 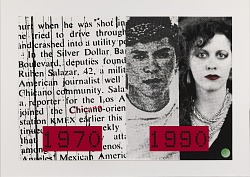 Ruben, Lou and Diane, from the National Chicano Screenprint Taller, 1988-1989 Estrella of the Dawn, from the National Chicano Screenprint Taller, 1988-1989 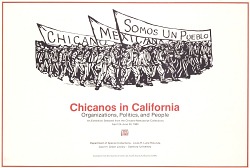 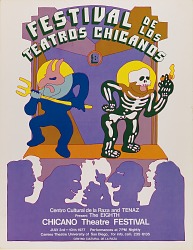 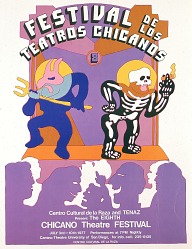 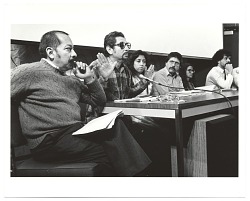 The panel 'Artistic Expressions in the Barrio' at the Califas conference on Chicano art and culture in California, held at the University of California at Santa Cruz 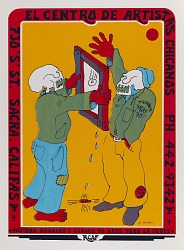 Fifty Years Ago, Fed Up With the City’s Neglect, a San Diego Community Rose Up to Create Chicano Park

Abiding by an inner voice is a powerful thing. If listened to carefully, it can guide you through those critical decision points in life, ones that give it meaning and purpose.

This past Saturday, April 25, Chicano community members in San Diego commemorated the 50th anniversary of Chicano Park. Unfortunately, the COVID-19 crisis forced the postponement of what would have surely been a large and boisterous community celebration. Nonetheless, the legacy of Chicano Park and all that it continues to signify remains forever embedded in the hearts and souls of all who had a hand in its making, and to those who have visited and been moved by it ever since.

Barrio Logan, formerly called Logan Heights, is a historic Mexican American/Chicano working class neighborhood located just south of downtown San Diego; with its origins dating to the turn of the century. Starting in the 1940s, U.S. naval operations, along San Diego Bay, cut off resident access to the beaches along the waterfront. Adding insult to injury, in the decades that followed, the city rezoned the area to permit rapid industrial expansion.

Yonkes, Chicano slang for junkyards, and other blight-causing operations proliferated, resulting not only in the loss of residential structures but in harmful environmental degradation.

A long-standing demand from residents for a community park seemed to be on the verge of being met with the city prepared to launch the project. But, on April 22, 1970, community activists noticed the presence of construction equipment set up around the park's designated site.

When the community was told of plans to instead build a California Highway Patrol substation, word spread rapidly. That day, Barrio Logan residents and supporters from other neighborhoods rapidly came together to occupy the land. This mobilization sparked a sustained and successful community effort that eventually led to what has become a beloved community gathering space, a designated historical landmark, and a popular tourist attraction. Local filmmaker Paul Espinosa says: “While Chicano Park has become ‘accredited’ by the larger society, it still retains its strong community identity and connection.” Espinosa produced the 2019 film Singing Our Way to Freedom about the life and times of Ramón “Chunky” Sánchez, who served as board chair of the Chicano Park Steering Committee.

Sánchez, who died in 2016, was a musician, community leader, activist and a hero to many. His words in Marilyn Mulford's 1988 film Chicano Park describe the commitment of many to the cause: “I think for the first time in my life I saw some people that were very dedicated, committed, believing in something. And that really inspired me and made me to say to myself, I want to be part of this. I want to be like those people. I want to be able to feel dedicated to something, to a good cause, and to me the issue of Chicano Park was that cause.”

Chicano Park sits on nearly eight acres under the foot of the bridge that links San Diego to Coronado Island. Among the usual park amenities is a central kiosk emulating a Mayan pyramid. Arguably its best-known feature is the array of stunning murals, executed on massive bridge supports and retaining walls by noted Chicana and Chicano artists from San Diego and elsewhere. The colorful and vibrant scenes depict a range of Chicano cultural and historical imagery that convey messages varying from the deeply spiritual to the decidedly defiant.

In April of 1970, hundreds of neighborhood residents converged on the site demanding a park. (Education Images/Citizens of the Planet/Universal Images Group via Getty Images)

At the site’s main building, plans are underway for the Chicano Park Museum and Cultural Center, an effort led by Chicano Park Steering Committee member and former California Arts Council senior staffer, Josie Talamantez. “While we will open with an exhibit featuring the Park’s mural artists,” says Talamantez of the project scheduled to open in 2021, “we also plan to present history and science content including, for example, the practice of alternative healing modalities practiced in our community.”

In April 1970, I was a sophomore at San Diego State University. The son of school teachers and community activists in San Bernardino, my inner voice led me to join Movimiento Estudiantil Chicano de Aztlán (MEChA) and to engage with organized community mobilizations.

Since the 1970s, dozens of murals depicting civil rights figures, scenes of revolutionary struggle, Mesoamerican mythology and other aspects of Chicano culture have been painted on the bridge pylons. (Sandy Huffaker/Corbis via Getty Images)

The Chicano Movement (El Movimiento) was in its heyday. The United Farm Workers Union were organizing strikes, marches and boycotts. The bloody Chicano Moratorium, protesting the Vietnam War, had taken place in East L.A. on August 29, 1969. Chicano activists, me among them, protested the Cambodian Invasion. On campus we had recently won concessions from university administrators to establish what would become the department of Chicana and Chicano Studies, guided by El Plan de Santa Bárbara, a manifesto that would inspire similar university programs, beginning at University of California Santa Barbara. My eldest daughter, Micaela Díaz-Sánchez, is now an associate professor of Chicana and Chicano Studies at this university.

Also in that year Los Toltecas de Aztlán, an artist collective, opened Centro Cultural de La Raza in a repurposed building from the 1935-36 California Pacific International Exposition that took place in the city’s prized Balboa Park. Young Chicano parents were naming their children Xóchitl, Tizoc, Itztli, and other Náhuatl names—Náhuatl is the common language of several Mexican ancestral and present-day societies. The air was thick with excitement, activism and purpose, and, I’m not going to lie, with marijuana.

I recently reconnected with college classmate Teresa Pascual-Valladolid, which has been a blessing in helping me recall these stirring times. She came to campus from the Imperial Valley, one of California’s most important agricultural hubs, the eldest daughter of a Filipino-Mexicana farmworker family. Upon arrival on campus, she was quickly swept up in El Movimiento unfolding around her. “For me, supporting Barrio Logan’s struggle to establish a much-needed park was something that I immediately understood and got involved with,” Pascual-Valladolid says. “I was all about community empowerment.” Post graduation, she went on to empower workers, building an impressive career as a union organizer and representative.

Today, the park is surrounded by galleries, breweries and restaurants (above: a 1964 Chevrolet lowrider on view at the annual Chicano Park Heritage Festival). (Sandy Huffaker, Getty Images)

I left San Diego in 1972 to attend law school at University of California, Davis. While there I was active with the Chicano Law Students Association, and participated in many secondary lettuce boycotts, picketing local grocery stores in support of the United Farm Workers Union. I also followed the activities of the Royal Chicano Air Force (RCAF), an artist collective, and attended events at La Raza Galería Posada in nearby Sacramento.

Over the years I have returned to San Diego many times. On those occasions, I have usually visited the Mecca that is Chicano Park, most recently in August 2019 to attend memorial services for long-time Chicano education and community activist, Gus Chávez, also a personal mentor at San Diego State. During this particular visit I became aware of something that had escaped me before. I had run into Josie Talamantez, who took me on a quick walk around the park’s immediate environs, heading first down Logan Avenue, where a massive lowrider festival was in full swing. Behind the cars and various booths were thriving small businesses. We turned on Sampson Street towards Barrio Station, a neighborhood house providing a range of community services. Everywhere around me was evidence of Chicano Park’s social impact and how it has played such a significant role in fostering widespread economic gains—all of it radiating from this place under the highways.

Upon graduating from law school in 1976, I began a career in the cultural field focused mostly on the role of Latinas and Latinos in community and nation-building and on our role in shaping local and national cultures. Along the way I became increasingly aware and appreciative of the role artists and other creatives can play in shaping the urban environment, if empowered to do so, and if done in respectful and close communication with community members.

Plans are underway for a Chicano Park Museum and Cultural Center (above: under the Coronado bridge in the Chicano Park) featuring the park's mural artists. (Sandy Huffaker/Corbis via Getty Images)

Architect Siboney Díaz-Sánchez (yes, my other daughter) points out that: “Community members are experts in what they want and need. As public spaces, parks carry higher value by reflecting the community’s abiding need for belonging. Art interventions enhance beyond the obvious aesthetics; they contribute to a community sense of mental and emotional wellbeing.” Díaz-Sánchez is working with Nuestra Comunidad, a Boston-based community development corporation on the design and development of Oasis, a community park to be built on a contaminated vacant lot near Roxbury’s old Bartlett Station.

Land is power. As with Chicano Park, Roxbury’s Oasis park development is also destined to signify Tierra Mía, meaning my homeland. In Roxbury as in Barrio Logan, many residents don’t have backyards. They look to community parks as places where, as Chunky Sánchez declares in the song “Chicano Park Samba,” recorded by Smithsonian Folkways, “all the familias could come and just get together on a Sunday afternoon, and celebrate the spirit of life itself.”

While Chicano Park was first booming, I would occasionally go down to observe and pitch in as I could, the urgings of my inner voice compromised by the demands of college studies and part-time employment. As I harken back to those times and witness their fast-forward impact, I realize the importance of abiding by urges that have driven me to play purposeful roles in community building. No hay de otra. There is no other path.