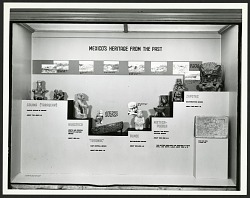 The hall (Hall 23) is the first permanent exhibit hall to be completely renovated since the building was opened to the public in 1910. The renovation was begun in 1951 as part of the Institution's Exhibits Modernization Program and "presents man's cultural development from his earliest known beginnings in Latin America to the high civilizations of the Inca, Aztec, and Maya." 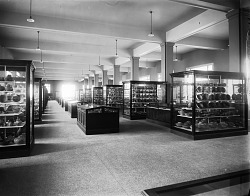 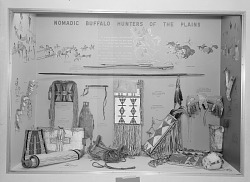 Smithsonian Archives - History Div
Anthropology exhibit of the "Nomadic Buffalo Hunters of the Plains," part of the "Native Peoples of the Americas" exhibit, in the National Museum of Natural History . The wall case contains a variety of objects from Native American societies from this area. The exhibit opened in 1957. 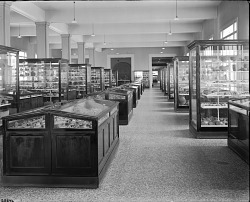 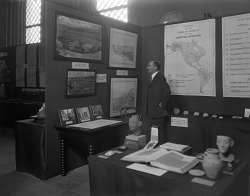 Smithsonian Archives - History Div
Division of American Archeology Exhibit at the Conference on the Future of the Smithsonian, February 11, 1927, with Neil M. Judd, Curator, standing to the left. 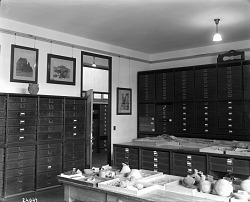 Smithsonian Archives - History Div
There are several photos of office spaces and Museum cases in this location.

The Department of Prehistoric Archaeology storage in the National Museum of Natural History on January 15, 1911. There are artifacts sitting on top of a table in the foreground. 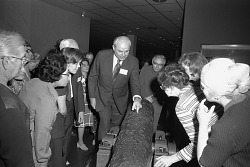 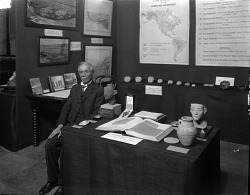 Smithsonian Archives - History Div
Division of Old World Archeology Exhibit at the Conference on the Future of the Smithsonian, February 11, 1927, with I. M. Casanowicz, Assistant Curator, seated to the left. Located in the Smithsonian Institution Building or "Castle." 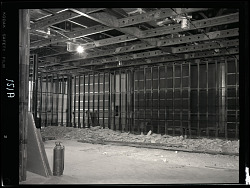 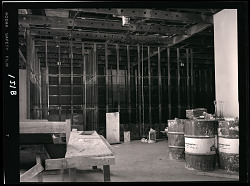 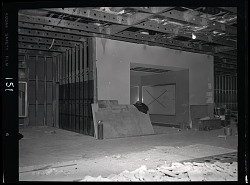 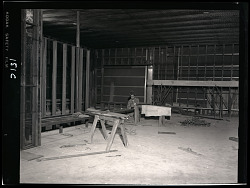 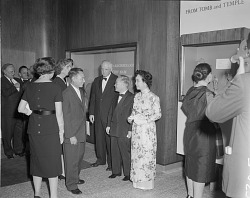 The National Collection of Fine Arts, now the National Museum of American Art, exhibition "Art and Archeology of Viet-Nam" at the Natural History Building, October 27-December 8,1960. The exhibit includes more than 400 objects covering several centuries. It subsequently toured United States cities under the aegis of the Smithsonian Institution Traveling Exhibition Service. This Photograph of United States and Vietnamese dignitaries at the opening reception on October 26, 1960, includes A. Remington Kellogg, assistant secretary of the SI, third from right. 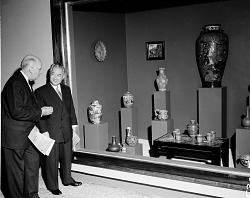 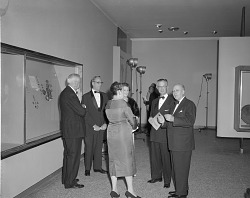 The National Collection of Fine Arts, now the National Museum of American Art, exhibition "Art and Archeology of Viet-Nam" at the Natural History Building, October 27-December 8,1960. The exhibit includes more than 400 objects covering several centuries. It subsequently toured United States cities under the aegis of the Smithsonian Institution Traveling Exhibition Service. This photograph of dignitaries at the opening reception on October 26,1960 includes James Bradley, Under Secretary of the SI, second from right and NCFA Director Thomas M. Beggs, right. 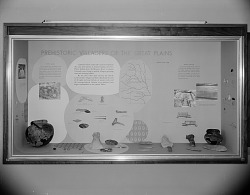 Smithsonian Archives - History Div
An exhibit case on Prehistoric Villagers of the Great Plains contains objects and tools from the life of the prehistoric villagers who lived in the area from the Missouri River to eastern Colorado. The exhibit is on display in the National Museum of Natural History's North American Archeology Exhibit which opened in November 1962. 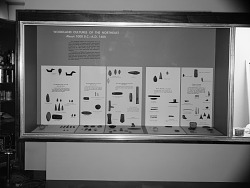 Smithsonian Archives - History Div
An exhibit case displays objects from about 1000 B.C. to 1600 A.D. from different Woodland cultures of the Northeast. The exhibit is in the North American Archeology Exhibit, which opened in November 1962, in the National Museum of Natural History. 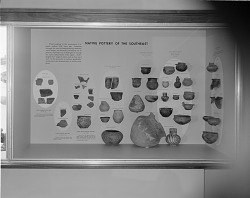 Smithsonian Archives - History Div
An exhibit of Indian pottery of the southeastern United States is on display in the National Museum of Natural History's North American Archeology Exhibit which opened in November 1962. 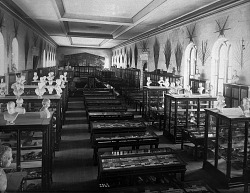 Smithsonian Archives - History Div
Incorrectly labeled 1903 on back of photo because photo was used in USNM Report 1903; Published in "The Castle: An Illustrated History of the Smithsonian Building" by Cynthia R. Field, Richard E. Stamm, and Heather P. Ewing, p. 84.

Prehistoric Archaeology exhibit in Upper Main Hall (above Great Hall) of the Smithsonian Institution Building showing ethnological and archeological specimens, looking west c. 1879-1903. An immense painted Tsimshian housefront, acquired from the Northwest Coastal Indians for display at the Philadelphia Centennial Exhibition in 1876, is visible on the west wall at the back of the room. Numerous busts populate the tops of exhibit cases. Spears and bows and arrows from various tribes are decoratively grouped in patterns on the walls. 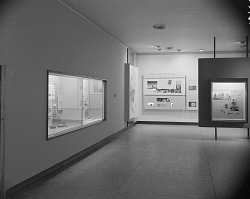 Smithsonian Archives - History Div
A portion of the North American Archeology Exhibit, which opened in November 1962, in the National Museum of Natural History. 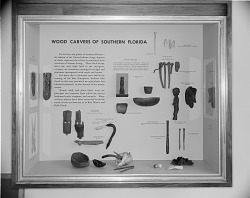 Smithsonian Archives - History Div
An exhibit of "Wood Carvers of Southern Florida" includes wood, shell and plant fibers used by the Calusa Indians of southern Florida and the tools, weapons and utensils fashioned with the raw materials. The exhibit is on display in the National Museum of Natural History's North American Archeology Exhibit which opened in November 1962.

Cookbooks can be an overlooked source of history. They reflect not only the culinary values of an era but even the political. That’s exactly what the new book Food in the Civil War Era: The South, edited by food historian Helen Zoe Veit explores, reports Nina Martyris for NPR.

Any connoisseur of Southern cuisine is sure to be aware of how history has shaped the foods of the region. Many foods are the dishes slaves cooked that harkened back to the foods of West and Central Africa and make do with more meager ingredients. (Though some Southern dishes betray unexpected influences — fried green tomatoes, for example, might come from Jewish immigrants and are apparently a recent addition to the cuisine.)

But modern variation in dishes cooked in the Northern U.S. versus the South is the result of decades of influences, simmered and blended over time. To delve into the differences made stark by the Civil War, Veit looks to cookbooks written in that time. "Although direct references to the war were rare in Northern cookbooks," Viet told Martyris for NPR, "a close reading can help us glean hints of the turbulence churning outside the kitchen window."

"There was only one actual cookbook published in the South during the war — but recipes were printed in other forms, especially in periodicals," she says.

That one cookbook shows how stark the difference in ingredient availability was. The Union’s naval blockade kept supplies from reaching the South and starved them of grain, pork and salt. Martyris writes:

While Northern cookbooks continued to call for exotic foreign ingredients like spices, cayenne, pineapple and chocolate for dishes like Calcutta Curry, Mulligatawny Soup and various souffles and ragouts, their Southern counterparts were teaching people how to cure bacon without salt.

The only Southern cookbook of the war years was The Confederate Receipt Book. Published in 1863, it had a revealing subtitle: "A Compilation of over one hundred receipts adapted to the times." And those were the worst of times, most miserably manifested in a recipe for Apple Pie without Apples: "To one small bowl of crackers that have been soaked until no hard parts remain, add one teaspoonful of tartaric acid, sweeten to your taste, add some butter, and a very little nutmeg."

But the lack of salt was the most dire threat to the South. It made curing fish, meat and butter difficult. The Confederate Receipt Book goes so far as to recommend that people build open-topped wigwams that could contain a fire and smoke strips of meat, as the Native Americans had done. People living near the ocean started boiling food in seawater for the salt it offered.

Veit did point out a rare reference to slavery in a Northern cookbook that demonstrates how racist undercurrents still ran strong in the north where African Americans were free. Mrs. S.G. Knight's Tit-Bits; Or, How to Prepare a Nice Dish at a Moderate Expense includes a recipe for "Tessie’s Wheaten Biscuit (From a Contraband). Here, the term contraband is used to refer to slaves who had escaped across Union lines. Martyris writes:

Written in broken English to mimic the speech of a slave, the short recipe used a touch of black comedy, unsavory to our modern ears, to evoke the cruelty of plantation life: It directed readers to "beat the dough 'till it begins to go pop, pop, pop, — it'll crack mos' like a whip, — then you know it's done."

Veit notes that while the other women in the book were referred to respectfully as Mrs. or Miss — such as Mrs. Faben's Economy Cakes or Miss Pindar's Dyspepsia Bread — contraband Tessie was denied that dignity.

It took until 1881 for a black American voice to be heard in the pages of cookbooks. An ex-slave, Abby Fisher, published her compilation of recipes informed by cooking in foods she made in antebellum Mobile, Alabama for people in San Francisco. What Mrs. Fisher Knows About Old Southern Cooking still ranks as a classic American cookbook, Martyris writes. 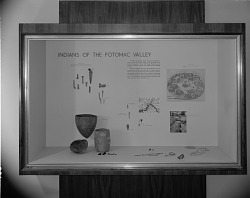 Smithsonian Archives - History Div
An exhibit of Indians of the Potomac Valley. The exhibit, which is on display in the National Museum of Natural History's North American Archeology Exhibit which opened in November 1962, contains ornaments and household objects made of pottery, shell, stone, and bone by the Indians of the Potomac Valley (Patawomeke), drawing of a typical village layout, location map, and a photograph of an archeological dig. 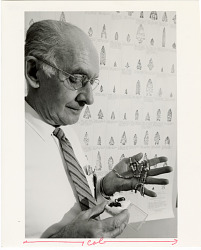 In 1936, Waldo Wedel was appointed assistant curator in the Division of Archeology, Department of Anthropology of the United States National Museum. He was made associate curator in 1942, and devoted a significant amount of time to the River Basin Surveys. During World War II, he was detailed for a brief period to the Military Planning Division of the Quartermaster Corps, being charged with analysis of captured foreign materiel. In 1950, he was named curator of archeology at the USNM. In 1962, he became head curator of the Department of Anthropology, and in 1964-1965, he was acting head of the newly organized Smithsonian Office of Anthropology. He became Senior Archeologist in 1965. He retired in 1977 from what had become the Department of Anthropology in the National Museum of Natural History and became curator emeritus. He continued activity with the department until 1990 when he moved to Boulder, Colorado.
1-24 of 319 Resources