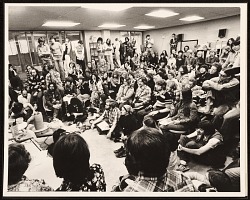 Toshiko Takaezu working in front of a class

Takaezu demonstrating throwing a pot for a large group of students.

An interview of Harold Rosenberg conducted 1968 July 8-1967 June 28, by Dorothy Seckler, for the Archives of American Art.

SI Center for Learning and Digital Access
Online exhibition showcasing self-taught artists of the past 40 years whose styles were often developed in isolation or in small communities across the country.

SI Center for Learning and Digital Access
Collection of roughly 16 million letters, photographs, diaries, sketches, scrapbooks, business records, and other documentation that supports the study of the history of the visual arts in America.

SI Center for Learning and Digital Access
List of museums in the United States with collections of African Art. Searchable by state. 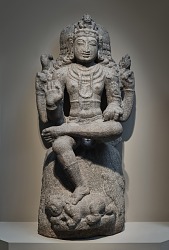 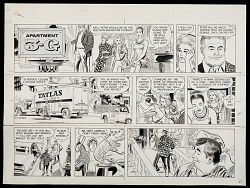 National Museum of American History
This pen-and-ink drawing produced for the Apartment 3-G comic strip shows the characters discussing how much they miss Peter. A new neighbor, named Newton Figg, is just arriving to move into 3-B, across the hall. Figg raises some eyebrows because he’s arriving with two oversized, stuffed animals named Wilbur and Wendell. Alex Kotzky(1923-1996), while an art student in New York in 1940, became an assistant at DC Comics. In the 1950s he worked for publishers Quality Comics and Ziff-Davis. During this time he also ghost-drew for comic strips such as Steve Canyon and Big Ben Bolt. In 1961 he and writer-psychiatrist Nick Dallis began producing Apartment 3-G. Apartment 3-G (1961- ) portrayed the lives of three young women who live together: art teacher Lu Ann Powers, nurse Tommie Thompson, and Margo Magee (who over time held different jobs). The soap opera-style comic includes the interactions of the three young women and their friendly, fatherly neighbor Professor Aristotle Papagoras.

SI Center for Learning and Digital Access
The Archives of American Art (AAA) provides researchers with access to the largest collection of documents on the history of the visual arts in the United States. The site includes an online catalog and the AAA's journal.

Archives of American Art
5 sound files (3 hrs., 30 min.) : digital, wav file Transcript: 92 pages. An interview with Bernard Chaet conducted 1997 June 18-August 15, by Robert Brown, for the Archives of American Art, at Chaet's home in Rockport, Massachusetts.
Chaet briefly speaks of his life growing up in the Dorchester neighborhood of Boston and his family, in particular his father, before segueing into his early beginnings as an artist and his acceptance into the School of the Museum of Fine Arts; he discusses his training there, as well as the three-year interim after he quit and before he completed his education at Tufts University when he worked alone; he refers to his teacher and the head of the Department of Painting at the School of the Museum of Fine Arts, Karl Zerbe, often, including his falling out with Zerbe, citing this as the reason his quit the school; he recalls his relationship with Boston art gallery owner Boris Mirski, who supported him from an early stage and sent him to Europe when he was young, the evolution of his relationship with Mirski, and the reason for their eventual falling out; Chaet describes his trip to Europe, where he traveled for several months with friends, at length, including the art museums and the suffering he witnessed in Italy and Spain, as well as accidentally meeting Picasso in Antibes, and the influence the trip had on his work; he recalls how he became an art teacher, how he was hired by Josef Albers at Yale, his tenure at Yale, some of the students there, including Chuck Close, Nancy Graves, and Richard Serra, as well as the internal politics and his accomplishments; he discusses his own evolution as an artist, including his use of watercolors, as well as his return to certain themes, such as his painting of cows (and how, more generally, artists do return to themes throughout their lives), and the balance between teaching and being an artist; Chaet mentions the beginnings of Artists Equity and Cold War politics. Chaet also recalls his wife, the artist Ninon Lacey, his former roommate, the artist David Aronson, and art world figures: Hyman Swetzoff, Edith Halpert, Dorothy Adlow, Charles Sawyer, Jackson Pollock, Pablo Picasso, Hyman Bloom, Willem de Kooning, Rico Lebrun, and others. 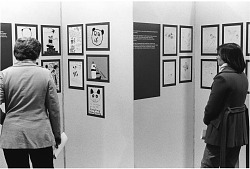 Exhibit of Art Work from "Animals in Art, Sketch-ins"

At the National Zoo, an exhibit of artwork by sketchers, who participated in the "Animals in Art, Sketch-ins", is being viewed by two visitors. On the wall to the left are sketches of the pandas at the zoo at that time. 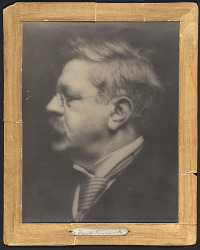 Archives of American Art
1 photographic print : platinum print ; 37 x 28 cm. Photo shows a profile portrait of painter and art teacher, Frank Duveneck. The photograph is accompanied by a canceled check dated 1918, signed by Duveneck, and affixed to the bottom of the photograph.
Frame has a tear in the middle bottom and is becoming detached in the upper left hand corner.

National Postal Museum
By Guest Blogger Lauren Van Hemert, Parent Volunteer Teaching ArtI am a parent volunteer teaching art to 57 fourth graders at Partnership Elementary in Raleigh, NC. Like many schools, we don’t have a large art budget or even an art teacher, just a team of enthusiastic parent volunteers who coordinate art projects on a bi-monthly basis.I am always on the lookout for free resources I can bring into the classroom. Since the fourth graders love using technology, online games, activities and slide shows are a big hit.

Archives of American Art
Sound recording: 1 sound cassette (90 min.) : analog. Transcript: 30 pages. An interview with Walter Feldman conducted 1998 Aug. 10, by Robert Brown, for the the Archives of American Art, in Feldman's home, Providence, R.I.
Feldman discusses attending classes as a youth, 1939-1942, at the Museum of Fine Arts, Boston; attending Yale's School of Fine Arts, 1942; service in combat infantry in the U.S. Army, Europe, 1943-1946; completing his BFA at Yale, 1946-1950 and MFA, 1951; working as an instructor in painting at Yale until his appointment at Brown University (1953; professor 1961) where he continues to teach; exhibitions and commissions; working in painting, printmaking, mosaics, and in fine book making.
He discusses working as the sole studio art teacher at Brown University until mid-1960s; hiring of additional artist-teachers and the subsequent split of the art department between studio art and art history; bringing book arts to Brown with his establishment of the Brown/Ziggurat Press, which he directs and which mostly publishes poetry; the many visiting arists at Brown; frequent commissions which have kept him young in spirit; and working in widely divergent media: medals, mosaics, and a huge mural commission in 1976; discussion of leading examples of his handmade books, including James Schevill's poetry, "Lager Lieder" (1991), a book of concentration camp songs, and Michael Harper's "Family Sequences" (1998); broadsides he's designed, sculptural "reliqueries" to memorialize the Jewish Holocaust; the current prospering of his artists books; and his success as a teacher.

Victoria Lichtendorf joined American Art in 2009 as the Clarice Smith Education Manager. Working with Clarice Smith Education team member, Adrienne Gayoso, she has the great pleasure of collaborating with an outstanding group of teachers from across the United States during summer institutes and throughout the school year. Victoria tells us about teacher Steve Rayburn who is using American art to teach in his English class. 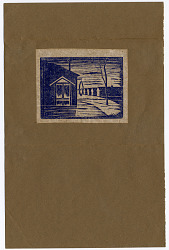 Mrs. Mabel Rose Vogel was an art teacher in Rohwer camp, and retained many of her student's art projects. Many were donated to the Smithsonian for its exhibit, but a room full remained in her apartment.

SI Center for Learning and Digital Access
Online exhibit illustrating the cultural and historical continuity of Mexican art from ancient times to the colonial era and the present. Uses pieces from a variety of media. Bilingual English/Spanish.

Campfire Stories with George Catlin: An Encounter of Two Cultures: A Guide for Teachers 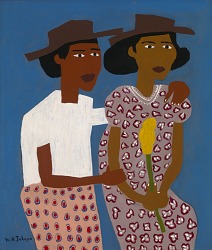 The Art of Science

Smithsonian Education
Classroom activities inspired by the exhibition Alexis Rockman: A Fable for Tomorrow are the focus of this session embracing science and art as complementary ways of understanding our world. Rockman is one of the first contemporary artists to build his career around exploring environmental issues, from evolutionary biology to deforestation and climate change. Presented by: Suzannah Niepold Teacher Program Coordinator, Smithsonian American Art Museum Sally Otis Videoconference Coordinator, Smithsonian American Art Museum Original Airdate: March 16, 2011 You can stay connected with the Smithsonian's upcoming online events and view a full collection of past sessions on a variety of topics.: http://www.smithsonianeducation.org/educators/events/online_events.html With support from Microsoft Partners in Learning.

Looking at Art with Toddlers

SI Center for Learning and Digital Access
Article for parents describes ways to engage toddlers in art, at home or on visits to a museum. Learn how to help stimulate a toddler's aesthetic development and build literacy skills.
121-144 of 3,564 Resources