Contributions to the anthropology of the Soviet Union 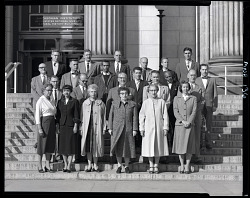 In Search of America's MIAs: Forensic Anthropology in Action 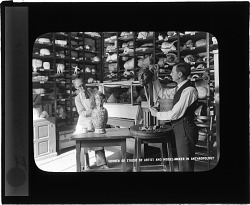 Corner of Studio of Artist and Model-maker in Anthropology 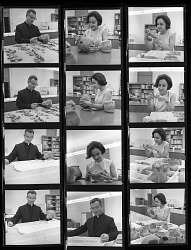 Archeologists Work with Artifacts from Division of Cultural Anthropology

Visiting archeologists from the Hemisphere Republics, Father Pedro Porras and Silvia Maranca, work with artifacts from the Division of Cultural Anthropology at the Museum of Natural History. Determining the Capacity of Human Skulls in Physical Anthropology

Although forensic anthropology has been around in some form or another since the 1200s, it wasn't until the scientific developments of the nineteenth and twentieth century that it really came into its own. "Although there were famous grisly murders of the nineteenth century solved through examination of bones and body fragments, it wasn't until the 1930s that the relationship between anthropology and the police was formally acknowledged," writes PBS.  In this decade–on this day in 1937, to be exact–William Ross Maples was born. His subsequent career as a forensic anthropologist helped to bring that field to prominence by helping to bring justice and peace to families as well as clear up some high-profile historical crimes.

Maples was involved in more than 1,200 forensic anthropology cases during his career, according to the Maples Center for Forensic Medicine at the University of Florida. Because he was an expert in analyzing human skeletal material, he worked on a number of cases that had historical value: For instance, he led the team that identified the remains of the Romanov family and Czar Nicholas II. He worked on the remains of Spanish conquistador Francisco Pizarro. But he also worked on cases that had current import–most prominently, the cold case of the murder of civil rights leader Medgar Evers. Here are a few of the cases where Maples’s touch was helpful:

Maples had been interested in the fate of the Romanovs since he was a child, writes author Robert K. Massier. In 1992, he and a team of colleagues–among them Michael Baden, the forensic pathologist who would lead the Medgar Evers investigation–headed to Russia to examine some remains that had been discovered there. The team confirmed that the remains were the Romanovs–minus Romanov daughter Anastasia and heir Alexei. DNA testing later confirmed their work.

The former U.S. President died in July 1850. He was exhumed 140 years later in an attempt to lay to rest rumors that he was murdered because of his stance on slavery. Taylor had died suddenly, leading some–including humanities professor Clara Rising–to speculate that he had been poisoned. “Right after his death, everything he had worked against came forward and was passed by both houses of Congress,” she said when his body was exhumed, according to Michael Marriott for The New York Times. Maples worked with coroner Richard Greathouse to examine the body, concluding that Taylor was not poisoned. His cause of death was listed as gastroenteritis.

Taylor was the first president whose remains were examined, though not the first to be exhumed. JFK’s coffin was exhumed and moved from one burial site to another in the 1960s. Although there was some negative backlash to Taylor’s exhumation, Maples said it was important to conduct arsenic testing and lay the rumors to rest. “If the possibility even remotely exists that one of our presidents was murdered, it is something that would have changed history,” he said.

Maples was part of the team that examined the remains of slain civil rights leader Medgar Evers, who was murdered in 1963. Forensic evidence from Evers’s body was used to help finally secure a conviction against white supremacist Byron De La Beckwith for shooting Evers in his own driveway.

“He was one of the few forensic anthropologists who could understand the needs of the justice system,” forensic dentist Lowell Levine told The New York Times for Maples’s 1997 obituary. “He could lead and conduct investigations where he would point to the crucial evidence to be shown at trial.”

Maples died of brain cancer at the age of 59. He didn’t have the opportunity to conduct his dream investigation, writes David M. Herszenhorn for the Times: examining several skeletons, held in Europe, that were possible candidates for being the remains of Christopher Columbus.

Smithsonian Archives - History Div
Cobb was a colleague of T. Dale Stewart in the Division of Physical Anthropology, National Museum of Natural History. Stewart discusses his work with Cobb in his oral history interviews in Smithsonian Institution Archives, Record Unit 9521.

See http://www.mnh.si.edu/exhibits/race/AnthroNotesSpring2011web.pdf for an image of Cobb's calipers.

Image title: American Association of Physical Anthropologists 25th Annual Meeting May 12-14, 1960. The man in the center of the line is William Montague Cobb, to his right is T. Dale Stewart. Located in the Archives Center, National Museum of American History, Scurlock Collections, Box 618.04.109. 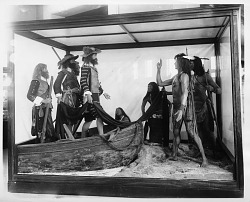 This life group exhibit has Captain John Smith standing on the prow of a boat with several colonists behind him and a group of Powhatan (Virginian) Indians, standing on the beach in front of him. The Native Americans are offering food stuffs and furs while Smith and the colonists are offering cloth and beads. This group is part of the Anthropology Exhibit in the United States National Museum's Natural History Building, now the National Museum of Natural History. The group was originally made by the United States National Museum for the Jamestown Tercentennial exhibition in 1907. William Henry Holmes designed the group, and it was executed under his direction.

Where did your favorite Thanksgiving Day food originate? Anthropology has the answer

Millions of people across the United States will sit down Nov. 27 to a traditional Thanksgiving meal, including turkey, potatoes, squash, corn and cranberries. These […]

The post Where did your favorite Thanksgiving Day food originate? Anthropology has the answer appeared first on Smithsonian Insider.

Basket making by Botswana women has a long history and it continues to be a robust craft tradition. Over the past three decades it has become increasingly well known in the international craft market.

Physical anthropology of the Lenape or Delawares, and of the Eastern Indians in general 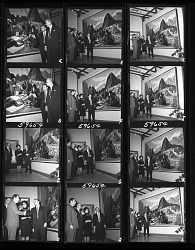 Unveiling of Mural by Alton Tobey in Hall of Physical Anthropology