Smithsonian American Art Museum
Video from the Luce Unplugged Community Showcase on May 22, 2015. Visitors enjoyed sets by local bands Young Rapids and Pleasure Curses, which were selected with the help of the Washington City Paper. Presented with Washington City Paper. #LuceUnplugged || http://americanart.si.edu/luce/unplugged

Smithsonian Center for Folklife and Cultural Heritage
While walking through the grounds of the Kenya: Mambo Poa program, it was nearly impossible for visitors to ignore theRead More

SI Center for Learning and Digital Access
In 1994, master Puerto Rican plena drummer Tito Matos emigrated to New York City and encountered there a vibrant Puerto Rican cultural revival occurring in neighborhoods such as the South Bronx. Matos soon became a part of this movement himself, joining Los Pleneros de la 21, a non-profit performance group founded to celebrate Puerto Rican traditions and to increase appreciation of bomba, plena, and other Afro-Puerto Rican artistic genres. In late 2003, Matos returned to Puerto Rico, where he continues to perform and involve himself in the musical traditions of his homeland. Here he discusses the importance of teaching music to younger generations in local communities.

Smithsonian Education
Welcome to the Smithsonian. This orientation video outlines some of the most exciting exhibits in this Smithsonian museum. Created for students, the video also illustrates a few museum dos and don'ts. Learn more: http://anacostia.si.edu/

The Wachiperi Community of the Peruvian Amazon

Smithsonian Center for Folklife and Cultural Heritage
At the 2015 Smithsonian Folklife Festival. Nely Ninantay Yonaje shares her experience growing up in the remote Peruvian Amazon community of Queros. In the Festival's "Perú: Pachamama" program, she was one representative of the Wachiperi people who are fighting to preserve and revive their traditional customs and native language. http://festival.si.edu Production, Editing: Claudia Romano Videography: Charlie Weber, Holly Wissler, Claudia Romano [Catalog No. CFV10757; Copyright 2015 Smithsonian Institution] 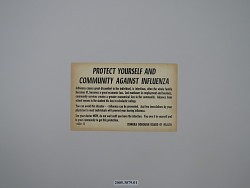 Protect Yourself and Community Against Influenza

"Influenza causes great discomfort to the individual, is infectious, often the whole family becomes ill, becomes a great economic loss. Lost manhours in employment and business, community services creates a greater economical loss to the community. Absence from school means to the student his loss in scholastic ratings.

You can avoid this disaster -- influenza can be prevented. Just two inoculations by your physician in most individuals will prevent your having influenza.

See your doctor NOW, do not wait until you have the infection. You owe it to yourself and to your community to get this protection.

Donora Borough Board of Health" 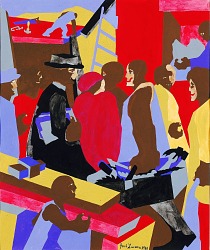 Smithsonian American Art Museum
Community celebrates the multivalent character of American life. In the 1980s, Lawrence was one of eight artists commissioned to create works on the theme of community for the Joseph P. Addabbo Federal Building in Jamaica, New York. It was an apt subject for Lawrence who frequently acknowledged the value and encouragement of the black community. Walking the streets of Jamaica, Lawrence said, “I was aware of the warmth, rapport, and the exciting movement and counter movements of its many inhabitants. The geometric and organic structures of the doors and various kinds of apparel and facial expressions give an overall special quality to a stimulating and unique environment.”

Hollywood Was Once an Alcohol-Free Community

In 1900, Hollywood, California, was a small town of 500 people, many of whom had moved there from the midwest. Around 15 years earlier, Daeida Hartell, a young woman from Ohio, had traveled there with her husband, Harvey Henderson Wilcox, and convinced him to purchase 120 acres. Curbed Los Angeles lays out the whole, long story: the couple soon moved there permanently and imagined a "utopian subdivision" to accomodate "cultured, wholesome Midwesterners looking for fresh air and a second act in California."

Daeida didn't plan on Hollywood to become any old wholesome community, however. She wanted it to be fiercely Christian, to match her own beliefs. Curbed LA describes what that entailed:

She was creating an alcohol-free, cultured Christian community. To that end she offered free lots to Christian churches regardless of their denomination.

Liquor, the use of firearms, speeding, pool halls and even bowling alleys were banned. The riding of bicycles and tricycles on sidewalks was prohibited—telling, given that the only sidewalks in Hollywood at the time were in front of the homes of Daeida and one other prominent developer. For all its infighting, the new town of Hollywood now entered its brief golden age. A woman who grew up during the time remembered a "country life," where children ran through lemon, orange, and tomato fields and made snowmen during the rare snow of 1905.

The idyllic town would not last long, however. In 1903, residents voted on whether or not to turn Hollywood into an official city—Daeida opposed the change, but, as a woman, could not even participate in the vote. By 1910, Hollywood, now a city, had a population had a population of 5,000. And by the time Daeida lost her life to cancer in 1914, Curbed LA writes, the first bars and arcades had popped up, putting an final end to her dream of a "temperate oasis" out West.

Cooper Hewitt, Smithsonian Design Museum
Did you know? Some of the world's most critical border checkpoints are located along the same parallel. This video is featured in the exhibition 'By the People: Designing a Better America,' on view at Cooper Hewitt, Smithsonian Design Museum September 2016–February 2017. Learn more at /www.cooperhewitt.org/channel/by-the-people. Video by Estudio Cruz + Forman. Courtesy of Estudio Teddy Cruz + Forman. THIS VIDEO HAS NO SOUND.

In the 1960s, archaeologists found a cemetery at Beckery chapel on a small island in Somerset, in southwest England. The fact that all of the 50-plus bodies, with the exception of two juvenile skeletons and one woman skeleton, were adult men led them to the conclusion that it was likely a cemetery for monks. But a new dig at the site proves that they weren’t just any monks. As Caroline Davies reports at The Guardian, it turns out that these monks are the oldest community of monks to be discovered in the United Kingdom.

According to the South West Heritage Trust, the monastic tradition—in which groups of religious men remove themselves from the world to pursue religious pursuits like studying the Bible, copying sacred manuscripts or brewing beer—had spread to present-day France by the fifth century. It was believed that the lifestyle likely then spread to the British Isles shortly thereafter. Though stories of St. Patrick, St. Brigit and others had indicated that monastic life began in the area in the fourth century, evidence in support of that theory was scant.

Rather, it was believed that the monks at Beckery came from the medieval period, when the nearby chapel was built. But after a community training dig uncovered two more bodies in May, and took bone samples of seven other individuals, researchers were given a chance to radiocarbon date the bones. What they found was that the earliest died between 406 and 544 A.D., making them the earliest monks found in the U.K. thus far. The burials continued until the seventh to ninth century, when the monastery likely was destroyed by Viking invaders.

Richard Brunning, director of the site, tells Davies that the find was a big surprise and very exciting. “Radio carbon dating has allowed us to get the answers we have been waiting for for 50 years,” he says.

Brunning says that, though the small island on which cemetery is located on is now home to wastewater plant and industrial park, at the time it would have been a secluded spot. “It would have been very small, we're only talking about a small number of monks there at any one time, effectively it's like a large hermitage,” he tells the BBC. “It's on a small island just off Glastonbury so it’s surrounded by the wetlands and cut off from normal life, that’s probably why it’s based there. There are a few rudimentary buildings made of wattle and daub, so nothing grand made of stone.”

Brunning and his team plan to do more tests on the monks to determine if they were local people who adapted the monastic life or if they came to Beckery from another location.

One of the skeletons uncovered at Beckery (South West Heritage Trust) 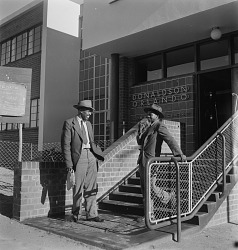 In 1945, Constance Stuart returned from her assignment as the first female South African war correspondent in World War II. Her reputation as a photographer grew. She maintained a photographic studio in Pretoria and Johannesburg. This series of images, which she entitled "Johannesburg Black Man" depict life in downtown Johannesburg and in parts of the city, where Black South Africans lived, such as Sophiatown, Pimville, and Newclare. A second series of images focuses on Father Huddleston's work in Sophiatown. In 1948-1949, in the early days of apartheid, Stuart documented the building of the South Western townships (Soweto) and the way Africans adjusted to this new environment.

There are no prints of this negative in the Constance Stuart Larrabee Collection. EEPA produced an 8x10 study print for reference purposes.

The cataloging of the Constance Stuart Larrabee Collection was supported by a grant from The Smithsonian Women's Committee.
73-96 of 124,683 Resources