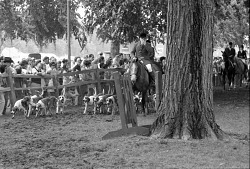 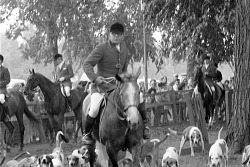 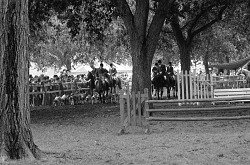 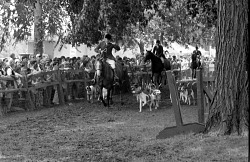 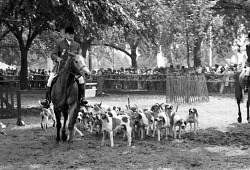 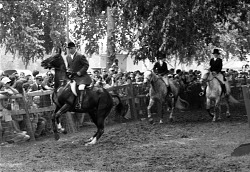 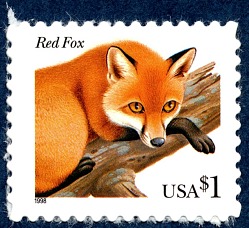 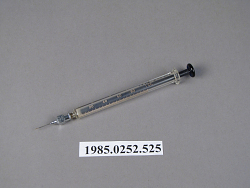 NMNH - Anthropology Dept.
From card: "Originally had 11 accessories: 2 grass mats, 3 double paddles, 2 otter spears (1 copper & 1 ivory head), 1 whale spear, 1 spear thrower, chafing stick (for hauling lines over) [presumably a gunnel board], 1 halibut club, lines. This is very similar to Cat. No. 160330 which was sent to Peabody Museum, New Haven, Conn. Refer to: Collin's MS. p. 771-2." From old 19th or early 20th century museum exhibit label found with artifact: "Two-hatch bidarka, Aleut, Unalaska, Alaska. The covering of the boat is made from the skin of the female sea lion, and ornamented with hair. The frame is made of the common drift wood. Dimensions: Length 20 ft. 10 in.; Beam 24 in.; Depth 12 in." Associated artifacts are Catalogue Nos. E168516 - 24. Detailed description of kayak and its associated artifacts is in Collins Ms., pp. 771-772.

Unangax̂ term "ulux̂tax̂" for a two-hatched kayak (bidarka) provided by Mark Snigaroff from the Native Village of Atka (March 28-April 1, 2016). 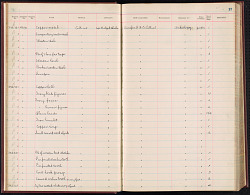 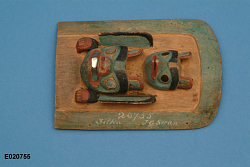 2 World Trade Center and the Promise of Green Skyscrapers

The architecture world has been buzzing about the newly unveiled renderings for 2 World Trade Center, the skyscraper that will complete the redevelopment of the World Trade Center site. Danish architecture firm BIG, led by starchitect Bjarke Ingels, plans to build the 1,340-foot tower as seven separate stacked boxes. The bottom of the building is slated to become the headquarters for Rupert Murdoch’s 21st Century Fox and News Corp, while the upper floors will be leased to various tenants.

The renderings, first revealed in Wired magazine, include plenty of attention-grabbing features: an indoor basketball court, a running track, a penthouse screening room. But the most noteworthy, perhaps, are the tiered green courtyards. Each box of the tower is smaller than the one beneath, lending a stair step appearance to the building. On each “step,” BIG intends to create a green plaza of grass and trees. Each plaza will represent a different biozone, ranging from tropical to arctic, though the plans are still very much in the conceptual stage.  If completed according to plan, it will be New York’s—and likely America’s—most noteworthy “green” building.

As evidence about the importance of green space to human flourishing mounts—studies have shown proximity to greenery improves both physical and mental health—incorporating parks and other green space into building design has become one of the hottest trends in architecture.

BIG has worked on other green-topped buildings. In Taiwan, the under-construction Hualien Resort and Residences rooflines follow the silhouettes of nearby mountains, topped with a strip of greenery. Plans for an energy company’s double tower headquarters in the Chinese megacity of Shenzhen show green roofs and interior green spaces.

Malaysian architect Ken Yeang has several high-profile green towers, including Singapore’s 15-story Solaris Building, with a ribbon of greenery winding all the way to the top, as well as a roof garden and green terraces.

In Shenzhen, French architecture firm Vincent Callebaut has proposed a series of “farmscrapers”—Jetsonian towers of egg-shaped pods incorporating both living space and food-producing green space into each level of the building. The vastly ambitious plans include fruit trees, grape arbors and veggie beds. Grasses would help act as natural filters for the towers' graywater. The buildings have yet to get beyond the conceptual stage; a number of other proposed green skyscrapers in China haven't progressed either.

Pulling off sky gardens is difficult. It's easy to put trees and shrubs in an architectural rendering, but financial and logistical concerns frequently get in the way of turning them into actual living gardens.

A few years ago, writer Tim De Chant begged architects to stop putting trees in skyscraper renderings. The problem, De Chant said, is trees don’t easily grow on skyscrapers due to weather extremes. He’d seen “one too many sketches of a verdant vertical oasis but too few of them actually built.”

London’s 20 Fenchurch Street skyscraper (dubbed the “Walkie-Talkie” for its bulbous, top-heavy shape) was in the news recently as an example of a green building that failed to live up to its renderings. The building’s developers had promised a top-floor sky garden open to the public, billing it as “the UK’s tallest public park.” Indeed, including a park in the plans was part of what allowed the building to be built at the edge of a conservation area. But when the garden opened earlier this year, critics lambasted the space as looking like an airport terminal or a hotel lobby, with a few plant beds surrounding restaurants and bars. Even more galling to detractors, the “public” park is only open to the public by booking three days in advance, only for groups smaller than six, and only before 6 p.m. In the evening, it’s only open to patrons of the floor’s restaurants and bars.

"If people [are] expecting to visit it as an alternative to Kew, then they will be disappointed," said the City of London’s former chief planner Peter Rees, quoted in the BBC.

Ingels could face more problems than just pure logistics in turning his renderings into reality. The previous design slated for the space, by venerable British architect Lord Norman Foster, was nixed, reportedly because Rupert Murdoch’s son and heir James thought it was too conventional for a media company headquarters. The new renderings may please the Murdochs, but whether the rest of New York is happy with the design will be another question. Other buildings that surround the plaza have had their ambitious designs slowly eroded by the drip drip of financial concerns, structural challenges and city regulations. The original plans for 1 World Trade Center included sky gardens above the 64th floor, but those visions gave way to the NYPD's demand for better bombproofing and other concerns. Over the many years from conception to construction, the wildly original design gave way to something much more conventional.

Ingels will face demands from the public, who may be leery of a skyscraper on the Twin Towers site that appears to lean to the side, from city regulators and from his financial backers. Only then will the task of attempting to make the sky gardens a reality begin.

After five mosaics dating back to ancient Antioch were acquired by the Museum of Fine Arts in St. Petersburg in the mid-1960s, museum officials buried two of them in the east lawn near the sculpture garden.

The reason why the Hellenistic art ended up underground has been lost in the subsequent decades. But as Maggie Duffy reports for Tampa Bay Times, a restoration project is underway to revive the mosaics and their history.

Duffy reports that mosaics were first discovered by a team from Prince­ton University in the 1930s during a dig in the ancient Greco-Roman city's ruins near the modern-day borders of Turkey and Syria.

According to the museum’s website, it acquired the pieces in 1964 from the university. It was one of the first purchases made by the then-fledgling museum, which opened its doors to the public in 1965. Three of the mosaics were incorporated into various spaces in the brand-new museum: one was added to fountain in the museum’s sculpture garden, one was put on display in the membership garden, and one was placed under a stage.

And the two remaining pieces, for unknown reasons, were buried in 1989.

According to Duffy, Kristen Shepherd, who became executive director of the museum in January 2017, had a longtime fascination for the mosaic embedded in the membership garden and began researching its history. Learning about the location of the other four pieces, she set out find the ones buried in the lawn.

An excavation successfully re-discovered the two mosaics in early March.

As Tim Fanning reports for WUSF News, the mosaics show complex, geometric patterns. On one of the pieces, a face is visible.

"These mosaics give us a virtually unmatched opportunity to talk about how important conservation of antiquities is," Michael Bennett, the museum’s senior curator of early western art, tells Fox 13 News. "We’re fortunate to have them but we’re also responsible for preserving and caring for objects from antiquity. What a gift these are to the community."

A three-phase restoration project is now underway for the mosaics, called “Antioch Reclaimed: Ancient Mosaics at the MFA.”

The process is open to visitors, as it’s taking place at an outdoor lab at the museum. According to the museum's website, it plans to temporarily exhibit the mosaics in the fall of 2020 before permanently installing them as part of a renovation. 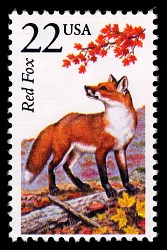 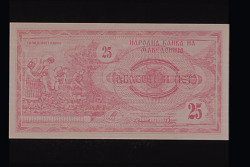 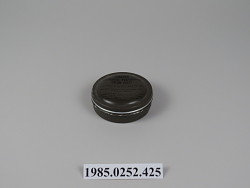 Provenience note: Accession record indicates that this kayak was collected by Capt. Zera Luther Tanner of the USS Albatross in Unalaska in 1892. This kayak is old Division of Engineering number 76281. At some point when the catalogue card was retyped (sometime from 1965 or later), the collection information for kayak number 76821 was mistakenly typed onto the catalogue card for kayak E398278. "Collector Capt. M.A. Healy, U.S. Revenue Cutter Corwin, 1885", which was typed on the card, applies to kayak 76821. It does not apply to E398278 (old number 76281). This kayak, under number 76281, is included on a shipping invoice dated June 23, 1947, filed in Accession 36096, recording the transfer of a number of boats from the Division of Engineering to the Division of Ethnology.

From Collins Ms. p. 782: Aleutian Three-Hole Bidarka. Used chiefly for travelling by the Aleut Indians of Alaska. this type of skin boat was originally introduced by the Russians or through their influence. The Russian traders used boats of this kind, the trader sitting in the middle while the boat is propelled by an Indian seated in the middle at each end. Full size. Unalaska, Alaska, 1892. Collected by U.S. Steamer Albatross, U.S. Fish Commission. A long, narrow, round bottom, keeless skin canoe; decked with three manholes; long, sharp cleft bow sharp stern; hogback sheer; fully equipped with paddles, spears, etc. The covering of the bidarka is made from the skin of the female sea lion, the seams being ornamented with hair probably obtained from the bear. This is drawn over the wooden frame when green and securely lashed at the manholes. The bidarka has the following equipment: 3 hatch breakwaters; 3 double paddles; 3 whale spears used in the capture of the beluga or white whale, hurled with a throwing board; the heads of the spears are made of walrus ivory attached to a bridle or line of braided sinew; 1 whale line cut from the head of the sea lion and used in connection with the spears; 2 throwing boards; 1 small chafing stick. Dimensions of bidarka: Length, 23 feet; beam 25 inches; depth, 14 1/2 inches." 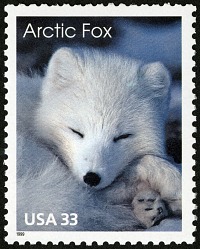 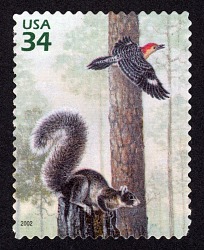 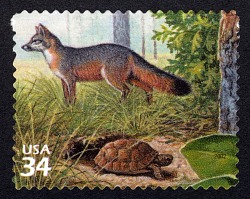 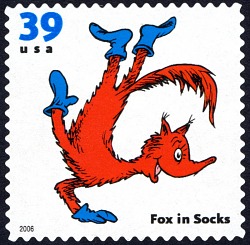 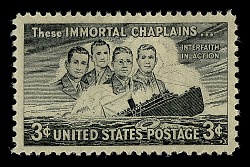 National Postal Museum
This Four Chaplains Issue depicts George L. Fox, Clark V. Poling, John P. Washington and Alexander D. Goode, four chaplains, also known as the "Immortal Chaplains," who sacrificed their lives during the sinking of the S.S. Dorchester. The S.S. Dorchester was a United States Army Transport ship that was struck by a German U-Boat during World War Two. The chaplains helped soldiers onto their life boats and gave up their own life jackets. 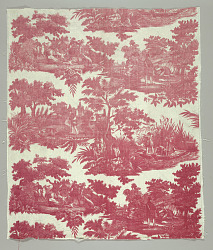