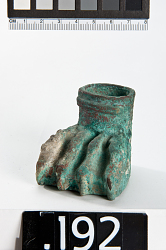 Fitting in the form of a lion's foot 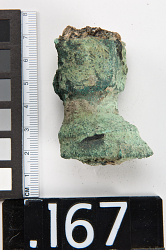 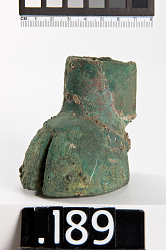 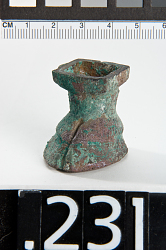 How Bad Is Air Travel for the Environment? A large passenger jet refueling. Such planes may consume five gallons of fuel per mile traveled. But is it possible that they’re more efficient than cars? Photo courtesy of Flickr user celikins.

Environmental activists seem to bleat this mantra frequently in discussions about climate change, whether it’s a sustainable thing to travel and—if we must go anywhere at all—whether it’s better to fly or drive. It’s true that going anywhere via a combustion engine, or even an electric one, produces greenhouse gases. But how much worse, if at all, are the impacts of flying than those of driving? I’ve spent my week sifting through online information, processing data and crunching numbers, and the answer seems to be that flying can be significantly more efficient per traveler, per mile, than driving a car.

Dubious? Then put on your seatbelts, and let’s take a trip through statistic country. Let’s start with a look at the most famous of jets, the Boeing 747. The Boeing website states that this model, with a gas tank capacity of 63,500 gallons, may burn five gallons of jet fuel per mile of flight. A 4,000-mile flight, then, requires 20,000 gallons of fuel. Divided among roughly 400 passengers, that’s 50 gallons of fuel to move each person aboard from, say, Chicago to London. A Honda Civic that gets 30 miles per gallon would need 133 gallons of fuel to make a trip of the same distance. Shared between two passengers (which may be a generous split; the average car carries 1.6 people in America), that would be 66.5 gallons per traveler. And an RV might move just seven miles on a gallon of gasoline. Split between the two people on board, that would be about 285 gallons of fuel each on a 4,000-mile tour. So far, air travel is looking to be more efficient.

If we keep studying this, the case for flying seems to build: According to FlightStats, an online air travel stat source, an average of 90,000 flights take off every day. The average flight distance is tough to determine, but this site calculated that the average distance of a medium-haul flight is 1,651 miles, so we’ll go with that (though many, many flights are probably 300-mile short hauls). At the 747 rate of five gallons per mile, that’ s 8,255 gallons burned per flight. And times 90,000 daily flights, that’s about 740 million gallons of fuel burned every day by airplanes—a very rough attempt at an estimate, but we get the idea.

Now for land travel: Americans alone reportedly drive 11 billion miles per day, according to these numbers from the Bureau of Transportation. A 2006 report (PDF) from the Environmental Defense Fund stated that Americans are responsible for 45 percent of the world’s vehicle emissions. That means we can roughly double—plus some—those 11 billion gallons per day to get the global total, which we’ll pin at 25 billion miles. If the average efficiency of a vehicle was as good as 25 miles per gallon (wiki.answers says it’s more like 20 in America), then we can easily calculate that automobiles worldwide consume about one billion gallons of fuel per day.

The score: Automobiles, 1 billion gallons of fuel burned per day, airplanes 740 million. (But according to Carbonica, a carbon offset consultant for businesses, the discrepancy is much greater—and in favor of airplanes. Carbonica’s website states that whereas land transport accounts for 10 percent of carbon emissions, with personal vehicles the major component, commercial airplanes account for just 1.6 percent of emissions.) Whether hopelessly jammed or moving free and clear, automobiles are not always more efficient at transporting passengers than airplanes. Photo courtesy of Flickr user WSDOT.

Now, let’s look at this from another angle and see if the results look similar: Airplanes measure fuel efficiency by how far one seat can travel per gallon, and, according to Department of Transportation data reported in the Wall Street Journal, major U.S. airlines average 64 seat miles per gallon. Let’s say again that the average American car moves 25 miles per gallon, with each car carrying, on average, 1.6 people. Translated into airline units, that’s 40 seat miles per gallon for a car. Airplanes, it still appears, are more efficient than cars.

Some sources report very different conclusions than mine. For example, this article from the U.K.-based Environmental Transport Association reports flying to be about three times more carbon costly than driving. But they came to this conclusion because their calculations are based on an extremely short-haul flight of 185 miles (Manchester to London, one-way) and a very efficient car. Because so much fuel is incinerated during an airplane’s takeoff, the longer the flight, the more efficient it is (though only to a point, due to the fact that it takes fuel to carry fuel, and fuel is heavy; the “sweet spot” for airplane efficiency seems to be about 4,500 miles).

Obviously, the more people that can be crammed onto an airplane, the less ownership each individual has in the fumes that it leaves behind. Thus, one obvious fault of the aviation industry is the fact that an airplane, even if just a handful of seats are sold, must still make the scheduled flight: When I flew from Auckland, New Zealand, to San Francisco in February, every passenger on board had room to lie down. In a perfect world, that flight would have been canceled.

Before you walk away thinking flying is greener than driving, consider some key points. First, airplanes emit their fumes directly into the upper atmosphere, where they may linger longer and cause more damage than the same gases at lower altitudes. Second, air travel is not a service that very often takes us places that we really need to be. That is, the Boston businessman that flies once a week to Miami for meetings would not be using a car to make the same journey if airplanes didn’t exist. He might simply not go at all. (Though in a better world, Americans might enjoy a high-speed rail system. Consider, Europe, home of the TGV; and Japan, where the magnetic levitation train seems almost a trick of magic, moving nearly as fast as an airplane on virtually no fuel. One of the most reliable “high-speed” train corridors in America, according to this article, is the one between Boston and D.C., served by an iron horse that clunks along at 70 miles per hour.) And the cyclist that flies from Seattle to Lisbon for a two-month bicycle tour of Europe might simply never go at all if it required taking a multiweek boat trip just to get to the starting point. She might, instead, explore the Cascades and the Rockies—not a bad alternative. (But this group of musicians—the Ginger Ninjas, which I featured several months ago—has toured in Europe by bicycle after traveling there by boat.) In this sense, flying is bad since it is not replacing another means of transport; it is simply offering the world’s wealthy another travel option. It is a luxury.

What’s more, the airline industry is growing. According to this post in the Guardian‘s “Travel Blog,” air travel may not be a big contributor to carbon emissions, but it’s been among the fastest-growing causes of global warming for years, with the industry expanding at 5 percent annually. And with the world’s most populous country now becoming among the wealthiest, hundreds of millions of Chinese citizens may soon enter the ranks of the frequent flier, as predicted by Boeing, which expects its passenger traffic to triple by 2030—with most of that growth occurring in China.

Drawing a single conclusion from this discussion isn’t easy, given the many variables, like a plane’s seating capacity, its fuel load, the flight distance and the number of passengers on board. But there is one statement you’d have trouble arguing with: If you hope to visit Hawaii this fall, you should probably fly.

Wings good, wheels good—propeller simply awful: If you think a Boeing 747 is inefficient at five gallons to the mile, then try to swallow this: The Queen Elizabeth II moves 29 feet per gallon. That’s 200 gallons of fuel burned per nautical mile. But the cruise ship, retired as of 2008, could carry as many as 1,777 passengers, plus another 1,040 crew members. Now that’s a boat in the carpool lane. Airplanes burn disproportionately large amounts of fuel during takeoff, making flights that cover longer distances more efficient—although distances greater than 4,500 miles decrease a plane’s efficiency because of the weight of the fuel it must carry. Photo courtesy of Flickr user a.koto. 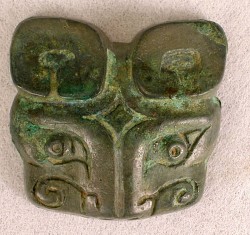 Fitting in the form of a taotie 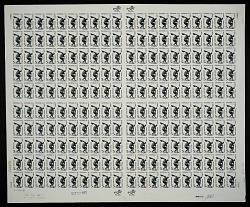 Smithsonian Channel
Scientists have discovered that the catastrophic decrease in apex predators, such as wild dogs, has led to a huge increase in smaller species lower on the food chain. This causes major ecological disruptions. From the Series: Guardians of the Wild: Carnivore Rescue http://bitly.com/2WNKWZr

It's All in the Watershed

SI Center for Learning and Digital Access
Website offers students a foundation for exploring their local watershed to learn about 'the web of life' and what they can do about 'watershed worries.'Though written about the Chesapeake Bay watershed, non-Marylanders can apply this information to their local environments. Includes information on 'the web of life,' geology, history of the Chesapeake, current scientific research, and what you can do to make a difference.

Relations of Aboriginal culture and environment in the Lesser Antilles / by J. Walter Fewkes

Reprinted from Bulletin of the American geographical society, vol. XLVI, no. 9, September, 1914. 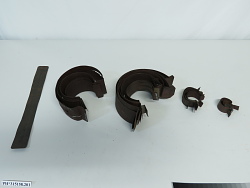 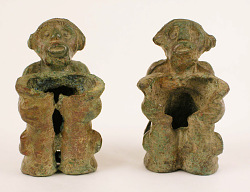 Pair of slide fittings in the form of monkeys 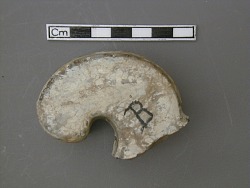 Fragment of the curved end of an architectural fitting 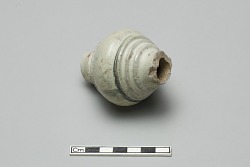 Fragment of the ceramic finial of an arcitectural fitting 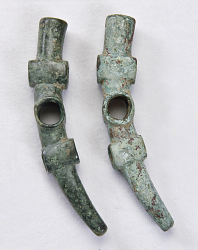 Power of Giving 2016 | Sustainability & the Environment: Conservation and Social Responsibility

Power of Giving 2016 | Sustainability & the Environment: Philanthropy’s Role in Conservation 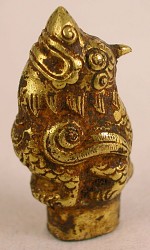 Fitting in the form of a fantastic animal 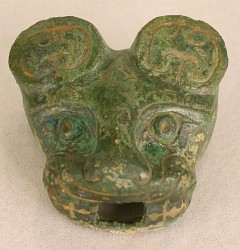 Fitting in the form of a lion's head 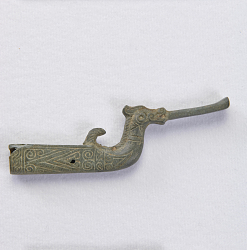 Fitting in the form of a bird's head

(Paleo)toxicological analyses of the mammalian skeleton: Environment, chemicals and health

National Museum of Natural History
Have you ever wondered how toxins can effect human populations over time? Sabrina Sholts uses skeletal collections to see if there is a correlation between petroleum exposure and the decline of human head size and stature.

The Determination of Appropriate Museum Environments