This teaching collection helps students to look closely and think critically by using three Thinking Routines to explore the cultural relevance of one family's baseball-related objects from an exhibition at the National Museum of American History, "¡Pleibol!: In the Barrios and the Big Leagues." The exhibition seeks to document the history of Latino culture through the lens of baseball, and explores baseball not only as a pastime close to the hearts of many people in many communities, but also for Latinos as a place to advocate for rights and social justice.

Finally, the prompts aid students in looking closely at a personal object of their choice and teasing out the story it tells.

For use in Social Studies, Spanish, English, and American History classes

This lesson is to be completed in the final days of our Early American literature unit.  Students have been tasked with creating an "Early High School Journal" to mimic the different styles of readings we have completed.  The final task of the journal will be to create an author's portrait page based on the tone and characters they have adopted for their project.

Analyzing Character and Motivation in the Crucible

This activity will be completed at the end of The Crucible before watching the documentary Central Park Five about a modern day witch hunt.  By completing the puzzle activity with an image from the Salem Witch Trials, the McCarthy Hearings, and the Central Park Five Court Case, students will find the common characters and motivations for which to focus in on the film.  Their culminating task will be to jump into the portrait and write a letter home to their parents, sibling, or best friend.  They will then be tasked with doing the same task each of the three days of the documentary.

This Learning Lab contains a five unit curriculum that puts students in conversation with a diverse group of significant Americans from the colonial era to the present. Lessons on the Elements of Portrayal, Symbols, Labels, Letter Writing, and Portrait Pairing prompt students to analyze the lasting impact of remarkable individuals from the Portrait Gallery’s collection. This collection was originally created in collaboration with Alice Deal Middle School in Washington D.C.

This Discovery Theatre original scores big in a musical play about sharing and taking turns, the importance of personal space, and the awesome power of teamwork.  Five-year-olds Mika and Casey are aspiring soccer stars and best friends—but they’ve ended up on separate teams! Through a mishap on the field, they discover that helping people is cool, thanks to another kind of 'team'-- of medical stars who make everyone feel great.

Discovery Theater is a pan-institutional museum theater dedicated to bringing theatre to young audiences and general visitors on and off the Mall since 1969.Race to the finish line with two black Olympians who changed history! Soaring music and the exhilaration of world-class sorts inspire us all to greatness in this vivid portrayal of the lives of Jesse Owens and Wilma Rudolph. Watch them overcome childhood illness, infirmity, and poverty to become the world’s fastest man and fastest woman, winning the greatest honor in athletics: the Olympic Gold medal. The John Cornelius II score speaks to the heart and soul of the winner in all of us.

Beautiful Day in the Neighborhood

Meet the butcher, baker, pizza-dough maker, and all of the friendly people who make our neighborhoods terrific places to live every day. Recycled crafting and interactive songs make this community day the perfect blend of learning and just plain fun.

Discovery Theater is a pan-institutional museum theater dedicated to bringing theatre to young audiences and general visitors on and off the Mall since 1969. The Bog Band is a group of young musicians who are “mad” for traditional Irish music and dance. Led by Pete Moss (a/k/a Mitch Fanning), they raise the roof to celebrate Saint Patrick’s Day with live Irish music and throw ion some lively step dancing. Add in a little cultural background and “Sure and it’ll be a rattlin’ good time!”  A Music in our schools Month program.

Discovery Theater is a pan-institutional museum theater dedicated to bringing theatre to young audiences and general visitors on and off the Mall since 1969. It's time for high adventure as Jojo goes on the lookout for all kinds of fascinating creatures in the wilds of his very own yard. What will he find hidden in plain sight? Come along on the trek as we learn, create, and play in this musical mini-travelogue about the hidden natural world close to home.

Exploring Fear with the Dark Romantics

This lesson would be taught at the end of the dark romantic literature unit.  After exploring the traits of the era, students will be tasked with writing their own haunting story to mimic the authors we've read.  They will use Fritz Eichenberg's"Dream of Reason" and a see-think-wonder activity as their starting point and inspiration.

Practicing Transcendentalism by Drawing with Words 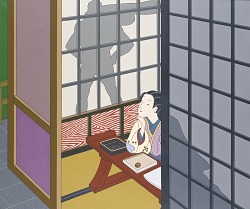 "Diary: December 12, 1941," internment in America, and the literature of exile

Beginning with Roger Shimomura's "Diary: December 12, 1941," students will engage with a variety of primary and secondary documents, works of art, and interviews as an entry point into Mohsin Hamid's contemporary work of magical realism, Exit, West.

Resources to exemplify how the war in Vietnam shaped the culture of our country, including art, book excerpts, song lyrics, op-eds, and stories about how even the Vietnam War memorial caused controversy. 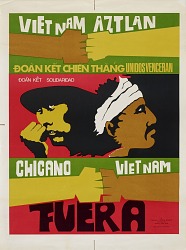 This collection is curated to introduce the historical background of the Vietnam War for the free verse novel Inside Out & Back Again by Thanhha Lai, 2011, based on one year in the life of a Vietnamese refugee who came to America in 1975 after the fall of Saigon. I use these resources for a middle school classroom, but it can be modified for high school as well. 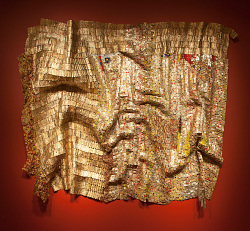 In this collection, students will explore an artwork by El Anatsui, a contemporary artist whose recent work addresses global ideas about the environment, consumerism, and the social history and memory of the "stuff" of our lives. After looking closely and exploring the artwork using an adapted version of Project Zero's "Parts, Purposes, and Complexities" routine, students will create a "diamante" poem using their observations of the artwork and knowledge they gained about El Anatsui's artistic influences. Additional resources about El Anatsui, how to look at African Art, and Project Zero Thinking Routines are located at the end of the collection.

This collection was created for the "Smithsonian Learning Lab, Focus on Global Arts and Humanities" session at the 2019 New Jersey Principals and Supervisors Association (NJPSA) Arts Integration Leadership Institute.

This collection uses a print by Enrique Chagoya, “Aliens Sans Frontières (Aliens without borders),” as a starting point to explore our assumptions about certain groups of people and how genetically similar all humans are despite our tendency for 'othering.' "After researching his DNA ancestry, Chagoya learned that his ancestors were Native American (Central Mexico), European, Ashkenazi, Middle Eastern/North African, Sub-Saharan African, and East and South Asian.” In this print, Chagoya presents six self-portraits, “each drawing on a pernicious stereotype of a certain ethnicity". Chagoya “uses his art for activist causes and also uses seemingly cartoonish or naïve imagery as an entryway for discussions of complex cultural and geopolitical issues”. (https://artsandculture.google.com/asset/aliens-sans-fronti%C3%A8res/ywEBemoMJCIUFQ)

This collection can be used in several classroom settings: Biology (genetics unit), Theory of Knowledge (to discuss ways of knowing such as language or consider bias), Geography or History. An interesting interdisciplinary exploration could be connecting a science class with a language class where students read written works from some of the same geographic regions as Chagoya's genetic breakdown.

Annotations attached to the print and video resources provide information on how to guide student exploration with each of the thinking routines.

Articles from New York Times: The first article included in the collection is an opinion piece written by David Reich, whose research focuses on population genetics of ancient humans, including their migrations and the mixing of populations, discovered by analysis of genome-wide patterns of mutations. The second article includes a selection of public comments on the original article as well as responses to each comment from David Reich.

Connection with Skin color, race and migration connection (presently working on this collection, will need to link collection before publishing!)

Students often understand that technological innovation makes our lives better, but they do not see the backstory. There are people who lose their livelihoods as machines replace them. What was once a necessary job is now obsolete--even the people themselves might feel obsolete. This lesson is designed to help students understand the drawbacks of progress and, more specifically, how it affects those people who were replaced.

A teacher's guide to the painting Achelous and Hercules, by Thomas Hart Benton. This 1947 mural retells an Ancient Greek myth in the context of the American Midwest. Includes the painting, a pdf of the myth "Achelous and Hercules", a supplemental picture guide to the story, a non-fiction article about fresh water from Readworks, and a supplemental worksheet. 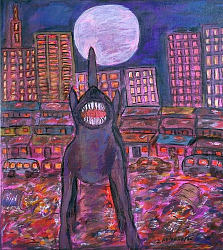 This Learning Lab collection was made to guide participants  during the Digital Storytelling workshop “Futurescapes. Storytelling and Video-Making Workshop: Using Digital Museums Resources to Imagine Our City in 2050””, a two-day event organised by the Storytelling Research Team at Loughborough University, UK, and hosted in the London campus at Here East on the 6th and the 7th of August as part of the East Education Summer School at Here East in Queen Elizabeth Olympic Park.

During the workshop, designed and facilitated by Dr Antonia Liguori, museums objects will be used to trigger stories about a day in East London in 2050.

Digital stories work best when there are rewards for both the storyteller and the viewer. Stories are always told from the perspective of the storyteller and for maximum benefit, it is vital to carefully choose the right story to tell.  All necessary information will be given during the workshop, but to maximise opportunities, participants need to bring with them an object or a photo that connects them to the place where they live now and/or to their idea about how this place could change in the future.

This workshop is also the final event of the EOOL project and aims to showcase the methodology applied in this EU funded project to explore its potential in other formal and non-formal education contexts.

This lesson will be completed halfway through a choice historical fiction unit highlighting books from the eras of naturalism and realism during the Civil War.  With background knowledge of the historical eras and content knowledge of one of the four possible books they will now jump into the picture and write a newspaper article.  The must be able to imagine where in their text they would place this article.  They are ultimately creating a group primary source for their choice book in completing this task. 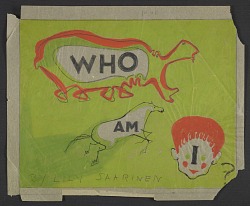 Search for your personal meaning in life. Who are you as an individual person? How do you connect as  a member of your community? your country? the world?