John Wayne may have been a cowboy to millions, but he was born a small town Iowa boy. The 5,000 town of Winterset has always celebrated this fact and, later this spring, will officially unveil a new $2.5 million museum dedicated to the Duke, The John Wayne Birthplace & Museum.

Born Marion Robert Morrison in a small clapboard house in Winterset in 1907, the future John Wayne moved with his family to nearby Earlham before leaving the Hawkeye State for sunny California in 1914. Despite living for only three years in the city that also claims peanut innovator George Washington Carver as a badge of honor, Wayne always spoke of Winterset as his hometown.

If Winterset sounds familiar, that’s because it is also the setting for the best-selling novel The Bridges of Madison County. The town is known for its covered bridges and hosts a Covered Bridge Festival every October.

The new museum is on the same downtown block as the 130-year-old house where Wayne was born. The house opened to the public a few years after the his death from stomach cancer in 1979, which led to renewed public interest in his life. “[Wayne was born] at 2nd and South street here in Winterset,” said Brian Downes, executive director of the John Wayne Birthplace & Museum. “People just started flocking to the house and it was a private residence at that time. The family who lived there really just got tired of people walking in their door, so they decided to sell the home to the Chamber of Commerce.”

In 1982, the John Wayne Birthplace Society formed and, for the next 25 years, the town welcomed visitors to tour the home. In the mid-2000s, the house was a main tourist attraction in Winterset (along with those covered bridges), but it eventually became clear that the people wanted more John Wayne. According to Downes, “The town was jam-packed with people all the time and the birthplace home was just too small to accommodate all the visitors. So, the directors of the John Wayne Birthplace formulated plans to build a permanent facility for the memorabilia, relics, personal and professional artifacts.”

Designs were drawn up in 2008, but it took a few years of fundraising to finance the construction of the new 6,100-square-foot museum, complete with spaces for permanent and traveling exhibits, an expanded retail store, and a theatre with seats from Grauman's Chinese Theater in Hollywood. The money eventually came from private donations, local corporate sponsorships and government grants, although donations are still being accepted.

Billed by Downes as “the largest private collection of John Wayne memorabilia in one place,” the collection was mostly amassed by the museum’s president of the board of directors, Joseph Zuckschwerdt. Artifacts include signed movie contracts, posters, Wayne-worn wardrobe, awards and, of course, saddles. But there are two items that stand out.

One is Wayne’s 1972 dark-green Pontiac station wagon, acquired from a gentleman in California who knew Wayne personally. The other is a seven-and-a-half-foot bronze statue of Wayne standing in front of the museum in his iconic pose, wearing a cowboy hat and holding a rifle. Donated by the Wayne family (in fact, Wayne’s daughter Aissa is on the board of directors) on the centennial of Wayne’s birth in 2007, it welcomes visitors and pilgrims alike.

Downes’ personal admiration for Wayne began when he was kid, but was cemented as an adult when, as a young Chicago Tribune reporter in 1977, he got a chance to interview the Duke at his Southern California home. “[The first] couple of minutes were really intimidating because of his size and who he was, but just minutes later he became the most ordinary fella you would ever want to meet,” Downes says.

While this is the only museum focused exclusively on John Wayne, there is a long tradition of museums and memorials devoted to other Western movie and music icons. There’s the Gene Autry Oklahoma Museum in the appropriately named Gene Autry, Oklahoma, and the Will Rogers Memorial Museum along Route 66 in Claremore, Oklahoma. The Roy Rogers and Dale Evens Museum once graced Branson, Missouri, but it closed in 2009.

While the museum anticipates a soft opening in mid-April, a giant grand opening gala will take place May 22 through 25, concluding with Wayne’s 108th birthday celebration. The event will feature music from country star Marty Stuart and the 100-member Iowa Military Veterans Band, plus appearances from Wayne’s frequent costar Christopher Mitchum and John Wayne biographer Scott Eyman.

And, of course, the Duke’s movies will be playing all weekend on the big theater screen, so visitors can see the man the way he was meant to be seen—larger than life. 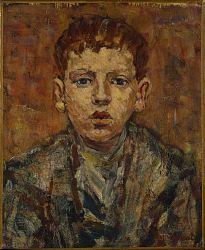 Head of a Boy