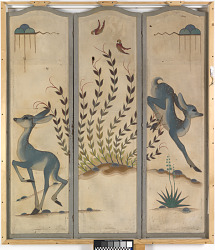 A mural in El Carmen features the lyrics from the popular Afro-Peruvian song “Zamba Malató.” Photo by Alexia Fawcett

In developing the Perú: Pachamama program, the curatorial team crisscrossed the country, from the urban scenes of Lima and Iquitos to the beach town of Huanchaco. Our travels helped us better understand Peruvian folklife, and by the end I was absolutely sure of at least one thing: Peru must be the world’s No. 1 consumer of paint.

There were political campaign slogans and icons painted on homes, advertisements for bottled water or cell phone services painted on the sides of restaurants, declarations of “this property is not for sale” painted on private entrances, registration numbers painted on taxis, and signage painted on all kinds of stores. The most impactful use of paint, however, was in the ubiquitous murals.

Murals bring art into the public sphere, which has the mutual benefit of providing artists a wide audience who in turn has a chance to appreciate art outside a gallery or museum. They can function as a means of communication for the socially marginalized and can be an effective tool in creating dialogue. Although we saw murals in almost every large city we visited, it seemed that Lima was especially chock-full of them. Each work has its own appeal and message, which breaks up the monotony of the urban landscape and illuminates topics that resonate with the people of the city.

Muralists across the world face certain challenges in their work. In addition to economic barriers, they must surmount the negative connotations associated with street art and the laws that forbid it—even when murals are commissioned by property owners or the government. However, like many other artists, they often find inspiration in their constraints, whether they be physical, cultural, religious, or ideological.

This painting in the main plaza of Moche depicts daily life in the small coastal city. Photo by Cristina Diaz-Carrera

A political ad covered in chicha posters outside of Arequipa. Photo by Alexia Fawcett

Chicha music and the associated graphic art form definitely fall into this category. This genre developed as individuals from rural areas moved into urban environments and expressed their feelings of marginalization as migrant communities. The chicha-style murals we saw in Lima were much more than graffiti: they painted a picture (no pun intended) of a shared experience of migration and adaptation to a contemporary urban environment. Representing a growing aspect of modern Peruvian culture, there will be multiple music and visual artists representing the chicha tradition at the 2015 Folklife Festival.

As meaningful, beautiful, and important as we found this art form to be, not everyone shares our admiration. On March 13, municipal workers began painting over murals throughout Lima’s historic district. Officials expressed concern that the city would lose its UNESCO declaration as a World Cultural Heritage Site and, after citing an ordinance from 1994 requiring the maintenance of the city’s historic architecture, announced the plan to eliminate all murals from the center of Lima. Critics say that the decision was political—rejecting public art programs and murals commissioned by previous administrations. Whatever the reasons, over that single weekend, dozens of murals were erased.

One of my personal favorites, which I posted to our Instagram in October, was among those painted over, and one of future Festival participant Elliot Túpac’s emblematic murals, with the phrase “Antes Soñaba” or “I used to dream,” was also erased. Gone too are many of the murals created in the 2013 LatidoAmericano festival, organized by Peruvian street artists.

Street art in the beach town of Huanchaco. Photo by Alexia Fawcett
There was significant backlash from the people of Lima, who posted on social media using the hashtags #SalvemosLosMurales (save the murals) and #BorraronUnoPintaremosMil (they erased one, we’ll paint a thousand), as well as staged protests in front of murals so they would not be painted over. Where murals once were, you can now find graffitied phrases and images of protest. One group has tagged the city with QR codes, which activate an augmented reality smartphone app showing the murals that once adorned those now blank walls.

The question at the heart of this conflict is how and by whom culture is defined. The disappearance of murals in Lima is a significant loss, as they reflected the shared experience and culture of many city residents. However, just as many of these erased murals rose in deference to the marginalization of the artists and their work, it seems as though new works will rise from their ashes in the face of further criticism. Even though their physical form is no longer visible in the streets, these murals will continue to live in the memory of the public as integral to the vibrant culture of Lima.

Alexia Fawcett is the community engagement manager for the Perú: Pachamama program. 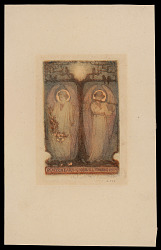 Peace on Earth Good Will Toward Men

National Museum of American History
This color aquatint represents two angels: one holding flowers, the other playing the flute. A tree is growing between them and a light is shining through the branches on the top of the angels. The hand lettering below the image is elegantly done and provides a good example of integration of text with image. Miss Clements was a painter, muralist, art teacher and etcher.

National Portrait Gallery
Pele deLappe shared with many women artists of her generation the challenge of maintaining an artistic career while raising children and making a living. This 1938 graphite drawing, conveying both her beauty and her self-assurance, asserts an auspicious beginning. The San Francisco-born deLappe met Diego Rivera and became a sketching companion of his wife, Frida Kahlo. In the early 1930s, deLappe studied at the Art Students League in New York City, but she returned to San Francisco in 1934, planning to concentrate on social-realist themes. Her style, however, reflected the influence of the Mexican muralists, including Rivera and her close friend David Alfaro Siqueiros, more than the quick-sketch approach of her New York compatriots. Her lithographs of the 1930s had a muralist’s sensibility, with simplified compositions, broad planes, low viewpoints, and heroic figural forms. This statically posed and sharply outlined self- portrait shares a similar monumentality. 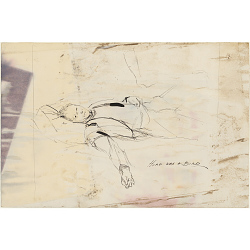 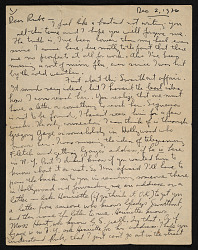 In his letter to Reuben Kadish, Philip Guston discusses various muralists and their work including that of David Alfaro Siqueiros, Harold Lehman, and Jimmy Brooks and describes the status of the W.P.A. project in New York at the time. 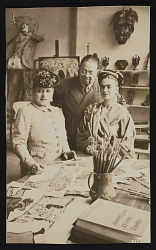 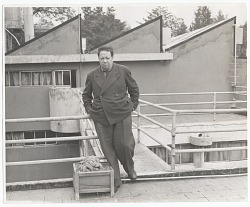 Photograph of Diego Rivera standing on the roof of his studio in Mexico City, Mexico, where he lived between 1932 and 1939. 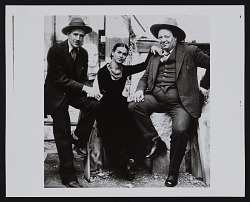 Photograph of Ralph Stackpole with Diego Rivera and Frida Kahlo

Archives of American Art
1 photographic print : b&w ; 20 x 25 cm. Ralph Stackpole sits left of Frida Kahlo and Diego Rivera in his stoneyard at Hotaling Place, San Francisco. The photograph was taken in 1931 but the photographer is unknown.
Item should be viewed with Digital Item ID# 19801, Emmy Lou Packard's notes about the photograph, which explain its provenance. 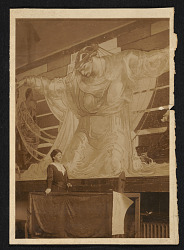 Photograph of Violet Oakley with her mural Unity

Archives of American Art
1 photographic print : sepia ; 18 x 13 cm. Violet Oakley standing beside a portion of her mural Unity at the Pennsylvania State Capitol.
Date based on date of commission and work on mural. 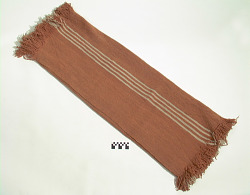 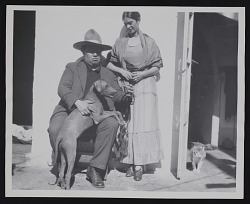 Portrait of Frida Kahlo and Diego Rivera with dog

Black and white portrait of Diego Rivera, seated and holding what may be a xoloitzcuintli dog, with Frida Kahlo, standing.

Smithsonian American Art Museum
Meg Saligman is a muralist, public artist, and conservation specialist who has worked across the country and around the world. She discusses her experiences making public art and the ways that she, the community, and conservators preserve these works for the future 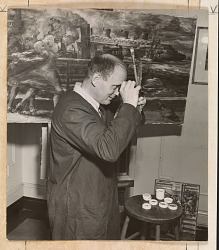 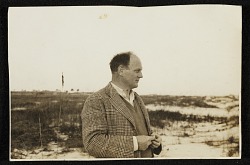 Reginald Marsh on the beach 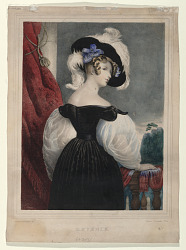 National Museum of American History
Sentimental genre prints documented the social image of Victorian virtue through domestic scenes of courtship, family, home life, and images of the “genteel female.” Children are depicted studying nature or caring for their obedient pets as they learn their place in the greater world. Romantic scenes picture devoted husbands with their contented, dutiful wives. In these prints, young women educated in reading, music, needlework, the arts, the language of flowers, basic math and science are subjugated to their family’s needs.

These prints became popular as lithography was introduced to 19th Century Americans. As a new art form, it was affordable for the masses and provided a means to share visual information by crossing the barriers of race, class and language. Sentimental prints encouraged the artistic endeavors of schoolgirls and promoted the ambitions of amateur artists, while serving as both moral instruction and home or business decoration. They are a pictorial record of our romanticized past.

This three-quarter length colored portrait print is of a young woman standing at a railing. The girl is looking back over her right shoulder. She is wearing a large hat with feathers and dress with large billowing sleeves. To her left there is heavy drapery with a tassel.

This lithograph was done by Anthony Imbert, a lithographer and marine painter based in New York. He was active as an artist from 1825 until his death in around 1838. He was born in France and became a French naval officer. He learned to paint after he was imprisoned by the British. When he was released, he came to the United States and developed a career as a lithographer and marine painter. He pioneered many new forms of lithography including a folding lithograph by joining two stories to create a larger print. The artist Dominico Canova was born in Milan, Italy. He immigrated to New York City in 1825, where he began his work as a lithographer under Anthony Imbert. He was primarily known in Louisiana as a teacher of painting and drawing, a muralist and painter. After a few years working under Anthony Imbert he accepted a teaching position in Convent Louisiana, at the College of Jefferson. Throughout the rest of his career, he held various teaching positions at different colleges and schools throughout Louisiana. He died in New Orleans in 1868. 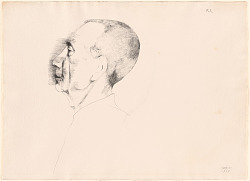 National Portrait Gallery
In a tribute he wrote soon after Rico Lebrun's death, Leonard Baskin noted of his teacher, mentor, and friend, "Nothing human was alien to Lebrun's vision." That sustained passion for the human figure in Lebrun's art during an era dominated by abstract expressionism profoundly influenced Baskin. In this deeply felt posthumous portrait, Baskin captures the fine line between representation and suggestion. Connecting the profile to the background through slender threads of ink-possibly representing breath, speech, or aura-he creates the impression of a remembered face, suggesting the gulf between absence and presence, memory and reality. At Lebrun's death in 1964, Baskin felt very much alone. But at the time of this 1968 drawing, he was earning international acclaim as the art world began to rediscover what he and Lebrun had always known-the profound potential of the human figure. 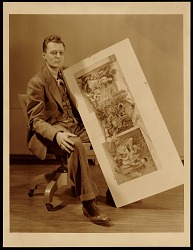 Robert Franklin gates with reproduction of his mural for the post office in Bethesda, Md. 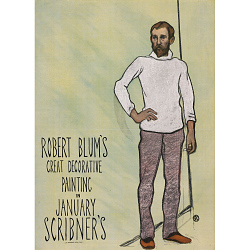 National Portrait Gallery
In 1893, when a young art editor at Harper's designed a poster in the decorative style of the European poster craze to announce an upcoming issue, the results launched a competition for stylish magazine advertising in America. William Sergeant Kendall made three monthly placards for Scribner's, including this January 1895 image of the painter Robert Blum. Kendall's use of an angled viewpoint and heavy, dark contours suggests the influence of Japanese prints. The effect was noted by a contemporary critic, who wrote in 1895 that Kendall's portraits were "a telegraph utterance, short, nervous, incisive, spoken with a dash and go which seem to imply 'I have not time to linger on the curves of those lips, on the turn of that eyebrow, and neither do you. . . . I have uttered the essential thought; you may fill in the rest.'" Instead of using the magazine's masthead, Kendall hand-lettered the text himself, balancing the off-center composition. 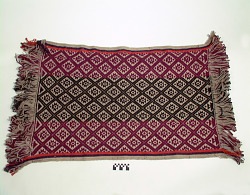 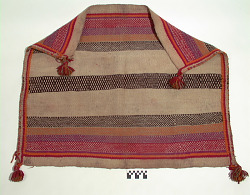 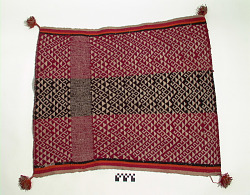