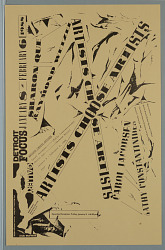 Cooper Hewitt, Smithsonian Design Museum
Poster/ announcement printed in black for exhibiton at Detroit Focus Gallery, designed to be mailed. Text in a variety of sizes, styles throughout. 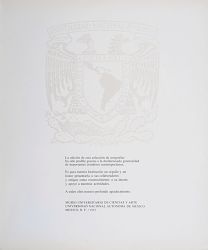 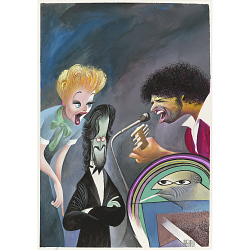 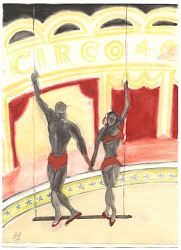 Watercolor and ink; series of 7

Cooper Hewitt, Smithsonian Design Museum
An arrangement of black, red, and blue rectangles and squares printed on tan ground. At right, a large red square with a tan circle inside spans the book cover and front jacket leaf. Printed text in black and red throughout. At back leaf jacket, black and white photillustration of the author. At back cover, printed critical reviews. 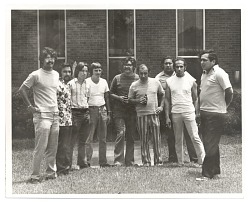 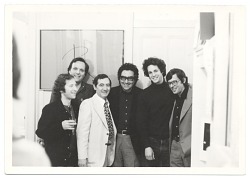 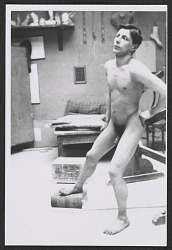 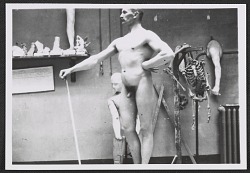 Archives of American Art
1 photographic print : b&w ; 9 x 13 cm. Date based on John Storrs finding aid.
Photo shows an artists' model posing with a cane in a studio. Hanging on the wall behind him are sculptures of body parts, a mannequin, and a skeleton.
Photo is a copy print. 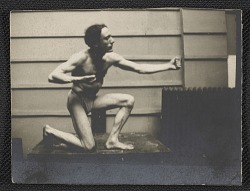 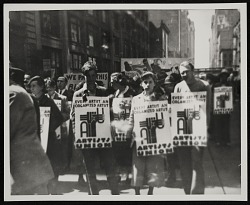 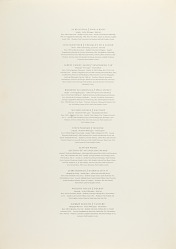 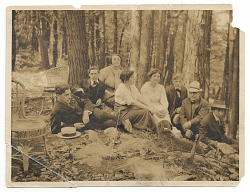 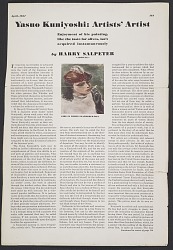 Almost four centuries after Caravaggio's death, the Baroque master's larger-than-life reputation still precedes him. A mercurial artist who lived less than 40 years, Caravaggio's legacy is one of volatile extremes. For every high he attained during his career—securing the largesse of an influential patron or receiving enviable commissions throughout Italy—a low soon followed. From brawling with soldiers, fellow artists and landladies, to committing murder over a game of tennis and running from the law, Caravaggio was doomed to play both hero and villain in his own infamous life story.

But Caravaggio isn't the only artist with a checkered past. Artists throughout history have led lives worthy of tabloid headlines. What makes the artistic temperament so susceptible to notorious and off-the-wall conduct? "Artists in general are unusual people," says Kevin Stayton, chief curator of the Brooklyn Museum. "Great artists push boundaries, have new ways of seeing and thinking, and do things no one has done before. This energy is not going to be confined to their work. It spills over to how they live." But the legend of an artist never outshines the art itself. Says Stanton, "Tons of people throughout history have tried to be artists, and lived outrageous lives. But if the art doesn't make them immortal, their behavior certainly won't."

There's no doubt that Caravaggio would have had a rap sheet as long as his arm if he'd lived during the 21st century. But even he could have learned a few tricks about living on the edge from these other temperamental artists.

A goldsmith and metalworker during the height of the Renaissance, Cellini's masterpiece was his bronze statue of Perseus, but that certainly isn't what he is best known for. Cellini's tell-all autobiography, My Life, published posthumously in 1728, details the countless episodes that made him a living legend.

He was banished twice from Florence for street fighting and, on one occasion, condemned to death. He murdered his brother's killer as well as a rival goldsmith, attempted to raise the dead in the ruins of the Colosseum in Rome and escaped prison after being jailed for embezzlement. He shot both the constable of Bourbon as well as the Prince of Orange during the Sack of Rome in 1527.

Cellini was also quite lucky in love. He had a slew of lovers, both male and female. He fathered six children, and was brought up on four separate counts of sexual misconduct—three times with young men, once with a female model.

The lure of bohemian life in late 19th-century Paris was too much for French post-Impressionist painter and lithographer Henri de Toulouse-Lautrec. A heavy drinker for most of his life, it is generally believed that Toulouse-Lautrec helped popularize the cocktail in the late 1890s.

Looking for artistic inspiration, Toulouse-Lautrec trolled cafés, cabarets and brothels in the city, and spent a great deal of time observing prostitutes with their clients. Eventually, he contracted syphilis from his model-turned-mistress. But these ventures led the artist to create a series of paintings, Elles, which shocked the art world because they portrayed the occupants of the red light district in a sympathetic and humane way.

Raphael also had an eye for the ladies. His most famous mistress, known as La Fornarina, which means "the baker's daughter" in Italian, was used as a model for many of the artist's paintings. Snubbing his nose at the social conventions of the time, Raphael even titled one of the paintings, La Fornarina. On another occasion, he had a mistress take up permanent residence in his art studio because he couldn't concentrate on his work without her nearby.

The French painter who is renowned for introducing "primitive" symbols and imagery in his work, Paul Gauguin made these changes after fleeing the constraints of urban city life—he referred to Paris as a "rotten Babylon"—for exile in numerous exotic locales.

In 1887, he fled to Martinique to, in his own words, "live like a savage." There, he lived in a hut, likely had affairs with numerous native women and definitely contracted dysentery and marsh fever.

In 1891, Gauguin traveled to Tahiti. He immersed himself in the life of the local, indigenous population, which included marrying a young Polynesian girl who was just thirteen years old. She became pregnant two months after their marriage.

By 1901, Gauguin had moved to an even more remote residence on the island of Hiva Oa in the Marquesas. He purchased land and built what he called, "the house of pleasure." This is where he spent his last days. He died in 1903 of an advanced case of syphilis.

Éduoard Manet, a leading Impressionist painter, was plagued by a love triangle that spanned family ties. He married his father's mistress to preserve the family honor, and contracted syphilis soon after—probably from his father through their mutual partner. It is also rumored that the boy whom Manet claimed as his son was, in fact, his half-brother.

Edvard Munch, painter of The Scream, once said, "Illness, insanity, and death were the black angels that kept watch over my cradle and accompanied me all my life." It was something of a self-fulfilling prophesy.

In his first romantic entanglement, which took place when he was 21, Munch had a dangerous two-year liaison with the wife of a cousin. Early in his career he became enamored with French Decadent Symbolist poetry, which moved him to create a new standard for his art—emphasizing foremost a pantheistic conception of sexuality. The results were portrayals of women as helpless innocents or threatening succubi. In another dicey contretemps years later, part of a finger from Munch's left hand was shot off during a quarrel with his ex-fiancé.

The most famous post-Impressionist, Vincent van Gogh is often mythologized as an artist who struggled with inner demons throughout most of his life. He was an alcoholic, and may have been addicted to absinthe, a liquor that was outlawed in the 20th century because it caused convulsions, hallucinations, mental deterioration and bouts of psychosis in those who imbibed. But van Gogh is most infamous for cutting off part of his left ear with a razor and delivering the bloody token to a prostitute, advising her to "guard this object carefully."

One of the most extreme cases of love gone bad involves the Italian Baroque sculptor Gianlorenzo Bernini. Bernini's mistress, the wife of one of his assistants, was having an affair with the artist's younger brother. When Bernini discovered their perfidy, he was so incensed that he attempted to kill his brother using an iron crowbar, and sent a hired thug to disfigure the face of his mistress with a razor.

Jacques-Louis David was a prominent painter during the French Revolution and was intensely involved in the overthrow of the monarchy. A stalwart Jacobin, he voted for the execution of Louis XVI during the National Convention of 1792. As a result of the government's overthrow, David was essentially a dictator of the arts in France until 1794, when he was arrested and imprisoned for a total of six months. During his time in power, he was responsible for much of the revolutionary propaganda that flooded the streets of Paris.

Some artists develop habits that may spark the creative muse, but are peculiar all the same. Michelangelo had a reputation for being surly and difficult to please. He was suspicious of other artists, onlookers and even members of his own family. His fits of rage were also legendary, so it comes as no surprise that he went through a slew of assistants during his career. He was touchy about his birthright and physical appearance, specifically his nose, which was flattened during a fight when he was a youth.

In his old age, Michelangelo is rumored to have worn a hair shirt beneath his outer garments, in an effort to mimic the trials of St. John the Baptist. Michelangelo also wore boots made from cured dog skin for months at a time. When it came time to remove them, his skin peeled off as well.

Pontormo, the Florentine Mannerist painter, was known for his idiosyncratic behaviors and extreme neuroses. He feared death to such an extreme that he would not tolerate the topic being discussed in his presence. Yet he certainly had a preoccupation with his own various health maladies. During the last two years of his life he kept a diary of his unusual daily concerns. These typically included a preoccupation with his diet (he subsisted on a diet of eggs for months at a time) and digestion: "October 19th, felt sick, like having a cold, and after that, could no longer throw up—and it took me several nights to get the hard stuff out, like it happened to me before in summer. I don't know whether it was the same, since the weather has been very nice, and I ate well all the time; but I began to look a little more after myself." Pontormo also avoided crowds and any kind of public festival. Concerning his work, he would habitually have his projects barricaded off from public view, with no one knowing when he came and went, until the paintings were complete. 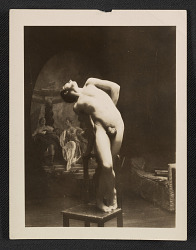 Archives of American Art
1 photographic print : b&w ; 12 x 9 cm. Date range based on quality of photograph.
Shows an artists' model standing on a chair in a twisting pose with his back arched and his head back, looking up at the ceiling. 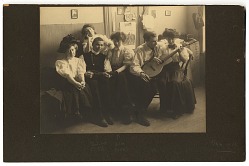 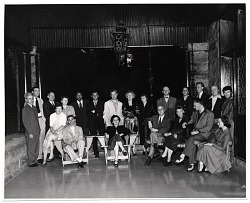 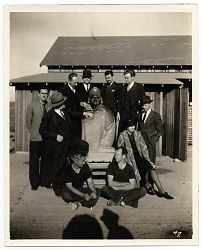