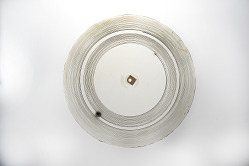 An interview of Joseph Pulitzer conducted 1978 Jan. 11, by Dennis Barrie, for the Archives of American Art.

An interview with Michael Smith conducted 2018 July 30 and August 1, by Liza Zapol, for the Archives of American Art at Smith's studio, in Brooklyn, New York.

Smith discusses memories of his home, growing up on the South Side of Chicago; his father's work in real estate in Chicago; his understanding of the contract buyers lawsuit; his recollections of the changing demographics of his neighborhood from Jewish to African American; his relationship to his mother, father, and brother; his relationship to his Jewish identity growing up; his involvement in singing, sports, and girlfriends as a teenager; the influence of television, movies, and comedy records on his childhood; his early experiences of art and watching his brother paint; his departure from Chicago and attending the University of Colorado in 1968, where his brother went, and following in his footsteps as an artist; protesting the Vietnam War and avoiding the draft; his first experience in New York City at the Whitney Independent Study Program [ISP]; his training in dance with Hanya Holm at Colorado College, his first choreographies; his studio in Boulder, and then in Chicago; his transition from painting into performance; seeing improvisation, performance, and dance in Chicago; Seeing William Wegman's work; creating his first comedy performances; influence of Jackie Vernon; developing the ideas for "Mike" and "Baby Ikki"; his early scripts and performance notes; influence of Alfred Jarry and Richard Foreman; his script, costume, and movement for "Baby Ikki"; the creation of Comedy Hour in Chicago, and other early "skits"; the inspiration for Minimal Message Movement; Coming to New York and meeting Marcia Tucker; his inclusion in Performances: Four Evenings, Four Days, at the Whitney Museum; performing at the Collective, Artists Space, Franklin Furnace, and other downtown locations; living in SoHo and the East Village in New York; developing a sense of timing and pacing in his early work; the sets and props of Let's See What's in the Refrigerator; the social commentary or politics of "Mike"; creating the composition and set of Notes for a Rec Room; his notebooks, nation and brainstorms for work. In session two, Michael Smith describes his sense of humor; Jackie Vernon and his sense of delivery; the humor of Jacques Tati and Buster Keaton; creating his first work composed for video, Secret Horror; his relationship to music, punk, New Wave, Muzak, rap, and his band the Social Climbers; his involvement with the Times Square Show and Colab; creating more video work that placed Mike in a cultural context with Government Approved Home Fallout Shelter, Go For it, Mike, Death of a Salesman, and others; collaboration with William Wegman on World of Photography; working with Steve Paul on live variety shows such as Mike's Talent Show, and Mike's TV Show; creating work for Saturday Night Live and Cinemax; creating Mike's Kiddie Show and working with Doug Skinner; the changes in arts funding in the 1990s; Working with Joshua White and creating Musco; starting to work in education and teaching in Los Angeles, at Yale, and at the University of Texas at Austin, Teaching performance art and specific assignments; a photographic series of class photographs; Creating Open House at the New Museum, and Interstitial for the installation; Returning to Baby Ikki and working with Mike Kelley on A Voyage of Growth and Discovery; his friendship with Mike Kelley; his thoughts about infantilist themes with "Baby Ikki", The theme of aging in his work and current work,; the creation of Excuse Me!?!...I'm Looking For the "Fountain of Youth," and Not Quite Under_Ground, commenting on social practice art; planning for his next project in Mexico City; his relationship to performance art; his dealers; curators, his response to critiques; his archive and thinking about his legacy. Smith also recalls Ron Clark, Malcolm Morley, Brice Marden, Carl Andre, Lawrence Weiner, Hanya Holm, Vito Acconci, Jim Self, Barbara Dilley, Mike Kelley, John Baldessari, Dike Blair, Mark Fischer, Carole Ann Klonarides, Eric Bogosian, Charlie Ahearn, Dick Connette, Mark Bingham, Alan Herman, Tim Maul, Amy Sillman, Andrea Blum, Sharon Hayes, Chuck Nanney, Annette Carlozzi, Toiny Castelli, Patty Brundrage, Christine Burgin, Emi Fontana, Chris Dercon, and Jay Sanders.

An interview with Mindy Weisel conducted 2001 September 21-November 1, by Anne Louise Bayly, for the Archives of American Art, in Washington, D.C.

Weisel speaks of her parents and their surviving the Holocaust; her mother showing her beauty as a child; being the daughter of survivors; wanting to draw as a child; studying art in college; her marriage and motherhood; balancing the role of wife, mother and artist; September 11th; her Ella Fitzgerald series; her time at the Virginia Center for the Creative Arts; process of working; creating Lily Let's Dance and It's Ok Kid; writing her books "Daughters of Absence", "Touching Quiet", "The Rainbow Diet"; art and survival.

An interview of Ian McKibbin White conducted 1980 November 24-1981 January 9, by Thomas Carr Howe, for the Archives of American Art.

White speaks of his education; U.S. Navy service, 1952-1955; travel, his museum career including work at the Brooklyn Botanical Garden, the Brooklyn Museum, the Peary-MacMillan Arctic Museum at Bowdoin College, and the California Palace of the Legion of Honor; the merger of the California Palace of the Legion of Honor and the M.H. de Young Memorial Museum into the Fine Arts Museums of San Francisco; the funeral of Alma de Bretteville Spreckels; Thomas Carr Howe as his mentor; FAMSF's "blockbuster exhibitions"; membership organizations; development of the American collection; fiscal problems and museum staff. He recalls David Levine, Jack McGregor, Aaron Shikler and others.

An interview of Nelli Bar Wieghardt conducted 1987 July 9-1989 April 29, by Marina Pacini, for the Archives of American Art.

Wieghardt discusses her and her husband Paul Wieghardt's art training in Germany; their move to Paris in 1931; their emigration to the United States in 1940 and their involvement with Quaker refugee programs; their move to a hostel in Cummington, Massachusetts and subsequent employment at the Cummington School in the Hills and the Berkshire Museum; their move in 1943 to Philadelphia to set up and run an art department for the Friends Neighborhood Guild; exhibitions at the Carlen Galleries and their relationship with Albert Barnes; the move in 1946 to Chicago and their teaching careers and methods at the School of the Art Institute of Chicago, Illinois Institute of Technology; the University of Chicago, and the Evanston Art Center; their exhibition history; and the Wieghardt galleries at the State Museum, Ludensheid.

An interview of Beatrice Wood conducted 1992 March 2, by Paul Karlstrom, for the Archives of American Art, Women in the Arts in Southern California Oral History Project.

Wood speaks of her memories of Gertrud & Otto Natzler and getting involved with ceramics; the future of art in America; and women in art.

An interview of Edith Wyle conducted 1993 March 9-September 7, by Sharon K. Emanuelli, for the Archives of American Art, Women in the Arts in Southern California Oral History Project.

Wyle speaks of her family background and her early education and interests; her studies at U.C. Berkeley and UCLA; her marriage to Frank Wyle; her friendship with Rico Lebrun; the cultural scene in Los Angeles between 1940 and 1970; the founding of the Egg and the Eye restaurant and gallery; and the founding of the Craft and Folk Art Museum and its development over the years.

National Anthropological Archives
72-K-2, related by Augustino Saloa (and his son?) with translations into Portuguese by Raimondo, a Mukumbi. Divided into three texts, each followed by a short Portuguese translation by Raimondo.

Interview with the Augustina Family and Lucia [sound recording]

The interview contains many Zapotec names and family names. Recorded in Yalalag, Oaxaca in Mexico.