Oil painting depicting the upper body of a woman in red dress and white hat with red ribbon looking through binoculars off to her left, surrounded by and abstract background of blue and black brushstrokes.

In an era in which painting has been decried as “dead,” Lynette Yiadom-Boakye has embraced painting: understanding color, surface, composition, and economy of line. Her work is about the craft of her medium. She works in oil for its natural and sensuous qualities, and its quality of gradation from dark to light. A day in her studio might begin with such questions as how to create a harmonious composition using green or how to successfully depict a three-quarter figure. Each of her paintings is made in a day in order to maintain their sense of urgency and to prevent furthering any mistakes. She is motivated by under-painting, glazing, pigment, composition, and failure. She would rather move on than exacerbate a problem by struggling with a painting.

Yiadom-Boakye does not consider her luminous large scale paintings or etchings to be portraiture. The characters that inhabit her work are based on neither acquaintances nor models. Her process includes cutting and pasting images according to such categories as views of backs, full-length figures, and seated figures. As the artist says, “By isolating things, they lose their original context... but I can think about the composition of a painting, for instance, how to position a hand correctly, how a leg stands when it’s got all the weight on one side of it. So I construct the painting from all of these things.” (Interview with Naomi Beckwith, August 16 2013: 112.) And while her work is not motivated by politics, by populating her canvases with characters of color, Yiadom-Boakye normalizes the representation of dark skinned individuals. Her subjects are not engaged in acts of servitude or violence, neither are they white and privileged, nor green and de-racialized. These figures appear to be individuals with whom viewers can identify and in whom we can believe. They walk, dance, stare into the distance, cast their eyes down in thought, or turn a flirtatious gaze out from the canvas.

Yiadom-Boakye’s figures are numerous and timeless. There is no furniture, structure or fashion that casts these figures outside of the time of their viewer, minimizing any sense of distance from them. The growing numbers of men, women and children who occupy her canvases seem ineffably present. In 2006, Yiadom-Boakye said of her characters that, “Although they are not real, I think of them as people known to me. They are imbued with a power of their own. They have a resonance – something empathetic and otherworldly. I admire them for the strength of their moral fiber. If they are pathetic, they don’t survive – if I feel sorry for someone, I get rid of them. I don’t like to paint victims.” (Kim 2008: 103.)

After their completion, Yiadom-Boakye pairs her paintings with evocative titles that may refer to a place, day, or literary fragment. Her titles seem to heighten the tension between the reality and fiction of her characters. Donatien Grau has written of this complex tension that it “paves the way toward a conception of art based on the certainty brought by the awareness of uncertainty; the freedom brought by the experience of restraint; the sense of meaning resulting from the parallel sensed of meaninglessness” (2014: 43). Womanology 12 seems to imply that there might be a Womanology 1-11, scenes that we may still have the opportunity to encounter. Yet Yiadom- Boakye has dropped us into the middle of a story for which we must imagine the past and future. In this canvas, a confident woman in a scarlet dress and matching hat emerges from a swirling backdrop of blue and black. She holds in her hands a pair of binoculars as she looks purposefully off into the distance unaware or uncaring that someone may be looking at her. 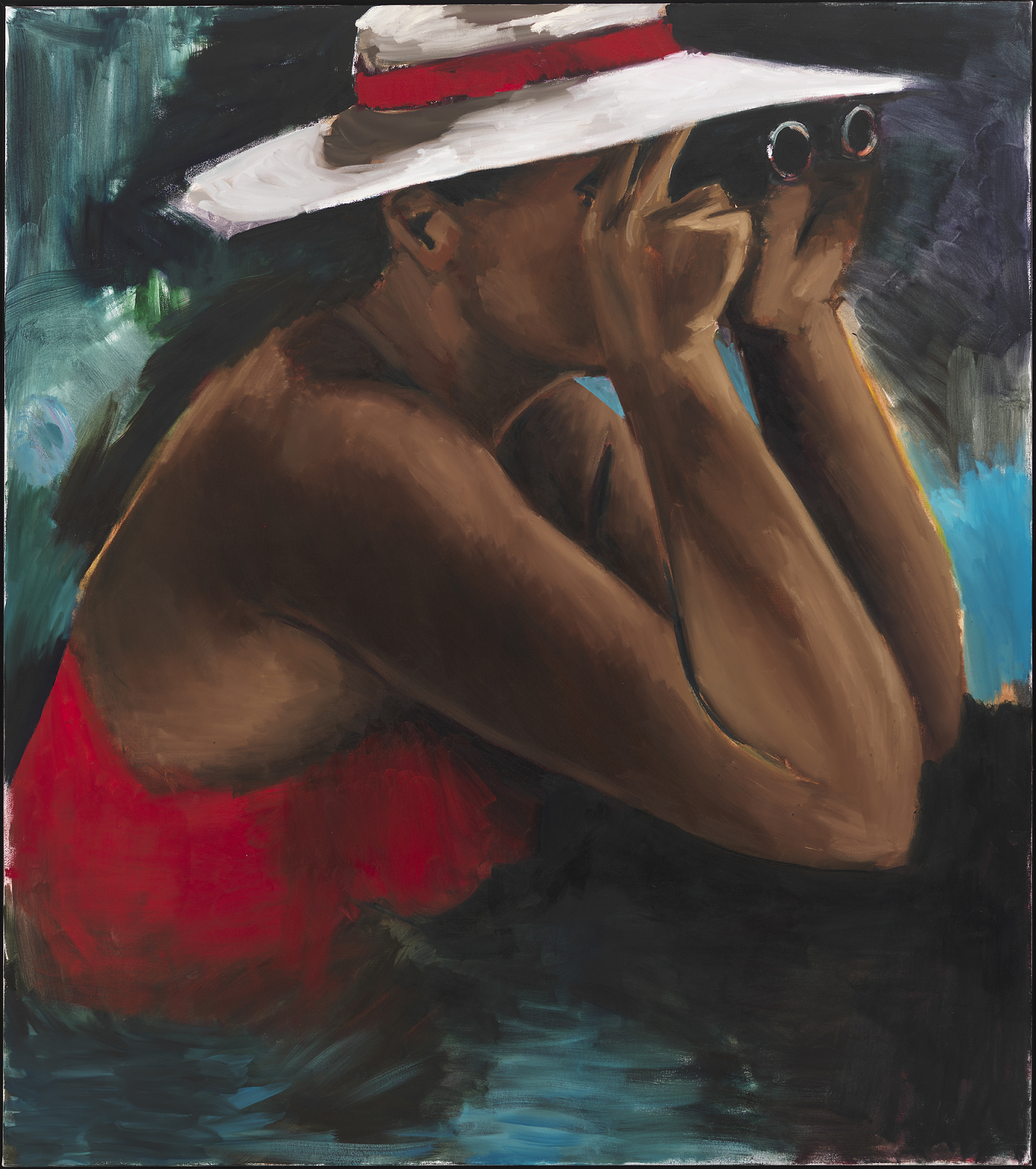