For African-American travelers in the Jim Crow-era South—often journeying from the north to visit relatives who had not joined the Great Migration—an unprepossessing paper-bound travel guide often amounted to a survival kit. The Green Book often functioned as a lifesaver.

Visionary publisher-entrepreneur Victor Green, a Harlem postal carrier, introduced the travel guide in 1937. For blacks denied access to restaurants, hotels and restrooms—and who often risked even greater danger if they were driving after dark—it was an essential resource, listing hundreds of establishments, across the South and the nation, that welcomed African-Americans.

Before the 1964 Civil Rights Act outlawed segregation, the Green Book sold in the millions and was passed from family member to family member.  For those who relied on it, it amounted to an essential safety precaution. Today, it is a potent artifact of discrimination.

The Green Book is also the subject of filmmaker Ric Burns’s forthcoming documentary. Burns is exploring the Green Book as a window into history, and into the present, where the experience of driving while black is again at the center of our national conversation. I spoke with Burns about what he’s learned so far in making this film.

How did you encounter the Green Book originally?

A colleague of mine named Gretchen Sorin, who runs a Cooperstown Museum institute, is an extraordinary historian who did her dissertation on the Green Book decades ago. And she approached me some time ago and said, “Let’s do a film about this.” And there’s nobody who knows more about the Green Book than her. And she just really sort of made it her own, did oral histories, went to many of the places, has collected over a couple of decades an amazing archive of material.

And what drew you to the Green Book project?

I was born in 1955, so anybody who’s got roots through their own life or their parents or their grandparents, during the era when America became a car culture.

You know, all those things like the old Esso sign, motels, Howard Johnson’s. It’s part of the inner imaginary of America. And what non-African-American Americans don’t know is that that story has a completely different cast to it. It just unfolded in a completely different way, so as you’re driving into Greenville, Texas, across whose main street the banner reads, “Greenville, Texas. The black is soil, the white is people.” You’re having a different experience in the family car.

We’re making a film called “Driving While Black,” which is covering this period when suddenly the automobile dawns for black Americans as it does for all Americans. It’s like mobility. You have agency. You’re not dependent on somebody else’s timetable or schedule. You go where you want, when you want.

But for black Americans, suddenly, the whole question of mobility and race in America is a huge powder keg. Now you as a black person are crossing white space. What happens when your car breaks down? What happens when you need to get gas? What happens when your four-year-old needs to go to the bathroom? Where are you going to eat? Where are you going to sleep? God forbid something should happen like a car accident, a medical emergency. How are you going to get to the hospital? What hospital will take you? I mean, this whole inventory of experience. All of which we are so deeply intimately in the homeliest way, associated with the American experience. I mean, it’s all this simple stuff. As soon as there was a car, there was that agency, but there was also those challenges.

[This film] is an opportunity to fill in a blank spot on the inner map of America. Where you kind of go, “Well, there’s the Civil War and then there’s something called Reconstruction, maybe Jim Crow means something to people, but really what’s something that organizes credibly and resonantly, the experience of race in America in the 1920s down through the Civil Rights Movement?”

We’re right in kind of the first phases of it, just beginning filming it. So those surprises are still to come. But I’ll say, the incredible thing about this topic, this whole area, is a surprise for non-African-American Americans.

Because what dawns on you is that there’s a reality that you never really understood existed. And once it’s there, that surprising revelation is completely transformative. One of the things that made the automobile so enfranchising for black Americans was that it was a little hard to see who was driving a car. As [Nobel laureate and economist] Gunnar Myrdal put it, equality begins at around 25 miles per hour. All these elaborate codes (e.g. black Americans must stop and give way to white Americans) begin to go by the wayside. You’re kind of in your own self-enclosed world as you move through the highway world of America. And you have what contact you wish to have. And you can also not have contact if you wish not to have contact.

That made this experience one which was both all too familiar in ways that were happy for black Americans and also very, very frustrating, and sometimes lethal. And for white Americans, completely unknown. The Negro Motorist’s Green Book. And it was just one of many. The Go Guide, the Travel Guide. The Travel Guide has this wonderful slogan on the cover: “Vacation and Recreation Without Humiliation.”

What else have you learned?

If you were a musician or an athlete, you were doing a lot of traveling around America, and cars made it much easier to get to where you wanted to go, and Green Books made it easier to find the places to stay; nevertheless, driving while black was always really difficult. There’s kind of a painful existential bottom line here.

It’s integrated into the reality of American experience. Thurgood Marshall has an incredible story about the “sundown town.” He’s in Shreveport and basically the police are saying, “Nigger boy, what are you doing here? You better be out of town before sundown.” Who but African-Americans happen to have in their heads “sundown town” as a reality? It’s not for nothing that the last Green guide is published in 1966. And it’s not for nothing that Victor Green said in his editor’s note in the beginning, the time will come and I hope it comes soon, that this guide will no longer be necessary. But until it is, happy motoring, folks.

And there’s all sorts of stuff. Esso, the kind of way in which commerce and consumerism and capitalism saw ways of marketing to new demographics, so God bless Esso, now Exxon. They saw the opportunity and went, you know what? We’re reaching out. And the reason why we’re having this conversation is because of the relationship that Victor Green established with Standard Oil.

And that put the Green Book on the map in a particularly special way. My family, when we drove our American Rambler into an Esso station in 1958 in Delaware. Even though I could ask my mother and father, and I did in Rehoboth, Delaware. There may not quite be sundown towns in Pennsylvania or Michigan, maybe in name only they’re not sundown towns.

When you sort of think about the overall narrative arc, do you see a sort of overall beginning, middle, end narrative arc that’s going to be imposed on this film yet?

We have a strong idea of it. The main narrative picks up when the automobile goes national. And when people who not just wealthy people can afford it. It’s roughly contemporaneous with the Green Book. First edition, ’36; last edition, ’66. Really, you know, the issue of mobility and the African-American experience in North America is connected from the start. There’s no way to understand that story without understanding what mobility and race meant from the time slaves were involuntary moved here. Or involuntary kept in place. So it’s going to be very important to not just to go, “Well, this just appeared just like a genie from a bottle,” you know, in 1925 when cars become more readily available to black as to white Americans too.

You need to be able to understand that sure, we had Civil Rights in this country as a movement. Post-second World War, the ’50s, Brown v. Board of Education, the great steps forward in the 1960s, ’64, ’65. But there’s no African-American, male or female, who does not know what it means to have a special worry and special instructions… Gretchen Sorin’s son Greg works in my office. He got the talk from his dad. “Here’s what happens if and when you get stopped, and Greg, you’re going to get stopped. Keep your hands where they can see them. Don’t make any sudden movements, Greg.” Greg is 23; he was born in the 1990s. His father’s white, his mother’s black. I mean, this is an experience that is so current that that’s why we’ve chosen not to name the film “The Green Book,” but “Driving While Black.”

In the 1941 edition and apparently in other editions, occasionally, people were contributing first-person essays. And in the 1941 edition, the essay is by a guy who took a trip to New England and into Canada to Quebec. And there is astonishment at the kind, hopeful, and civil encounter that they have in their first-person account with the police and a corner of the street in Quebec. So there’s that in there too.

Race is the crucible of American history and we’re at another one of the crossroads. And we’re getting to know, “we” meaning non-black America, are getting to know in a more intimate way, what race and racism means. So the constitutional legal battles have been fought and at least in name, won. Now we’re moving to the areas of the economy, culture, the thoughts and feelings; the hearts and minds of human beings. That’s where there’s -- surprise, surprise—an enormous amount of work. And the confrontations are so painful. They just… We got a long way to go. And you know, the Green Book is kind of…enjoying a moment of public awareness.

I’m looking at the pages, it’s quite visceral.

It’s really visceral because …it’s where we all live. And so suddenly you realize what’s going on in plain sight. So it’s not some foreign vocabulary; it’s not happening somewhere else. It’s happening, you know… And it’s not a diner in a black-and-white 1960s civil rights kind of context. 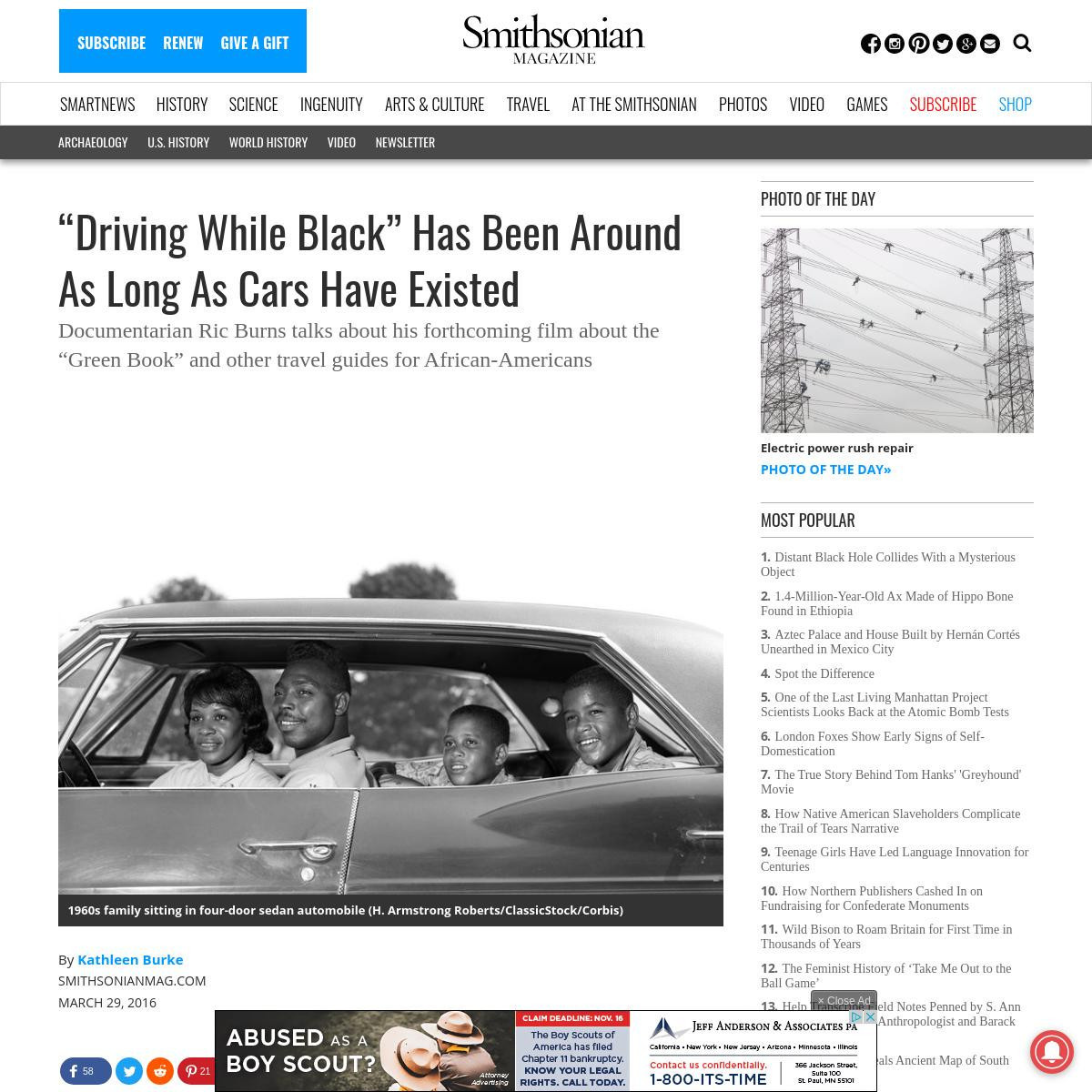 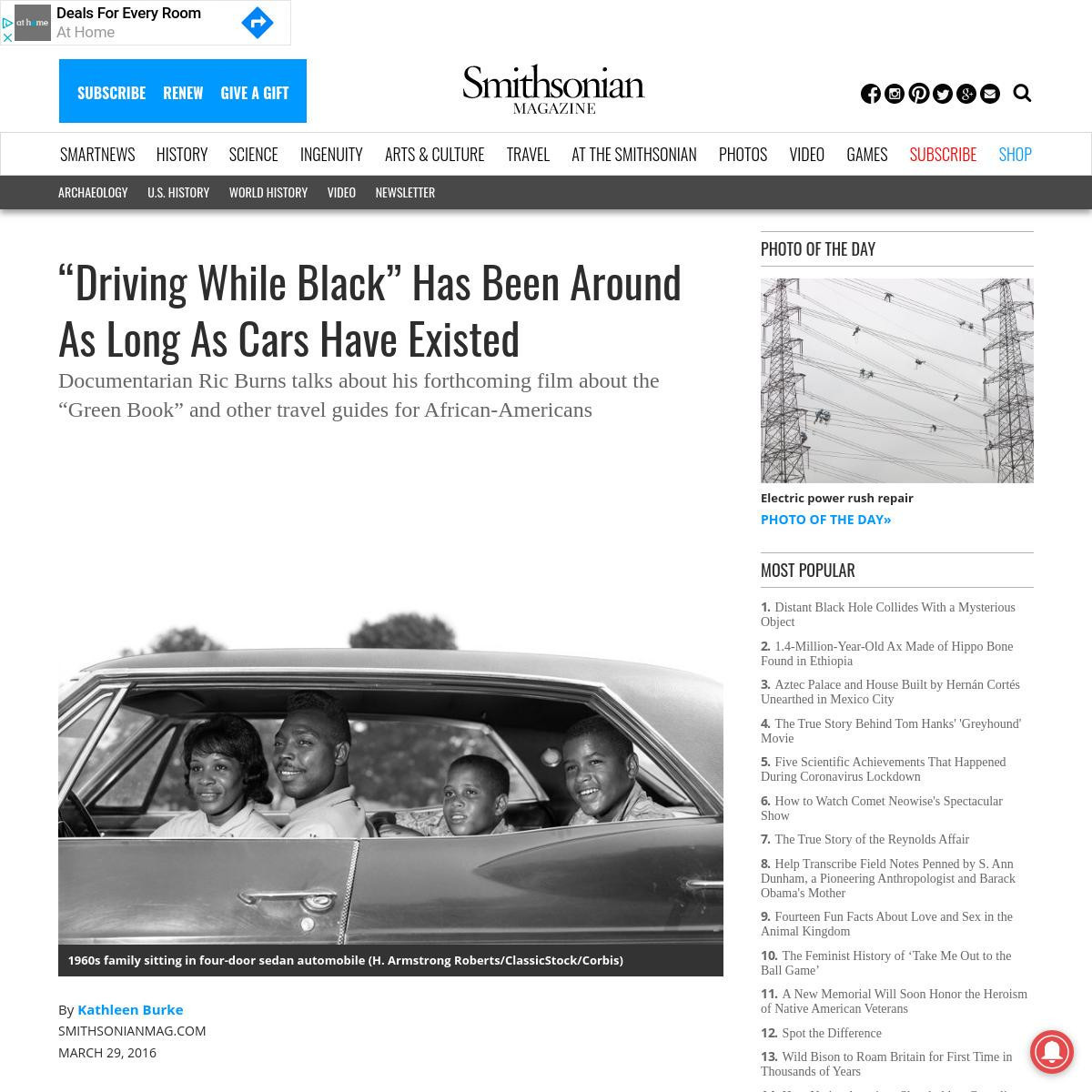