Ginkgo Bioworks is staffed by hackers. Though they prefer to say they "design organisms," the employees have built a lab, or "foundry," in Boston, where they hack biology. They splice genes, then insert mixtures of genes into vials of yeast, to quickly grow synthetic organisms that serve human needs.

Gingko’s creative director, Christina Agapakis, says they’re essentially in the business of speeding up evolution. "It’s like a rapid prototyping factory," she says.

The biohackers are working on building organisms that capture carbon and others that grow probiotics that help people fight off infections. The company received initial funding from DARPA to develop the latter. But right now, Gingko is creating organisms that emit specific smells. The goal is to mass-produce synthetic scents and flavors that can be used for everything from perfume to artificial sweetener. It's a step to potentially replace rare, expensive, slow-growing or volatile organic compounds.Robertet, a French fragrance company, commissioned Gingko to help synthesize a scent from a specific rose, only grown in Turkey and Bulgaria, that is laboriously picked by hand.

“Fragrance has been a lead because fragrance uses the chemistry of something that started as biological extract,” she says. “So we’re looking at where can biology come back into chemical engineering and make it sustainable and renewable.”

I recently spoke to Agapakis about the company and its mission:

How did Ginkgo get its start?

Ginkgo was founded in 2008 by Tom Knight and four guys(Reshma Shetty, Jason Kelly, Barry Canton, Austin Ch) who had just finished getting their PhDs at MIT. Tom had a hand in developing ARPANET, a precursor to the Internet, but in the late ‘90s, he decided computers were boring and programming biology was interesting. He wanted to see where engineering and biology could intersect. That was the point of Ginkgo. The founders want to make biology easier to engineer, and then to look at what that means for industry and technology.

Why is it happening now?

When they started in 2008, it was just about the time when the cost of DNA sequences was really rapidly dropping, and because of that people started sequencing everything. The knowledge of how evolution has solved problems has rapidly expanded, and people have sequenced all sorts of genomes and enzymes. It has become a resource or library.

The other side of things is synthesis. You used to have to find the organisms, and now you can synthesize genes from the database. When I was a student, it used to cost $1 per base pair, so a gene cost one to $5,000 dollars. Now it’s gone down to pennies per base. We just put in an order for 100 million base pairs from Twist [a synthetic DNA company], which is enough to write the yeast genome 10 times. It’s becoming much more possible.

What exactly do you do in the lab?

It’s like a rapid prototyping factory. We can run many variants of different pathways and see what works in the right combination.

Sometimes our projects start with our customers. They’ll say, “It’s hard for us to make this ingredient,” and we’ll start looking for an organism that will produce something for them. We start from the biochemistry. We have tech engineers who understand the biology of the cells, and all the metabolites that are there, so they understand how the processes are affecting the cells.

Other types of projects look at what biology can do in the chemical space. [Here is where Ginkgo is growing microbes to mimic the smell of that hard-to-grow rose.] For the ingredients that we’re looking at now, or flowers or plants in general, there are several classes of chemicals that can make different cells. There are say 1,000 to 5,000 different enzymes. We’ll say, lets synthesize them and put them in yeast and see what the variants do.

Why do you use yeast as the base material?

Yeast is awesome, because we as humans are really good at fermenting yeast. There’s a lot of technology around yeast’s ability to create flavors and smells, because of beer. What we do is a really cool mix of contemporary science and traditional brewing methods. Our head of fermentation actually owns a brewery—Mystic Brewery in Chelsea [Massachusetts].

The advantage of the foundry is that it can automate sequencing. (Ginkgo Bioworks)

What are you working on now?

There’s a constantly evolving Venn diagram of where biology’s capabilities lie, where the engineering is feasible and where there’s an industry, need and technology. Fragrance has been a lead, but we are also working on technology for carbon capture. We got an Advanced Research Projects Agency-Energy (ARPA-E) grant to look at carbon capture and converting short-chain carbons into more complex things. We’re also working with Ajinomoto, a Japanese food and chemical company, to see if we can find ways to improve their waste stream.

Bioworks 2, an expanded foundry, opens in the spring or early summer next year, and the foundry is constantly iterating. We’re always thinking about organism design and how to run it more efficiently. We’re bringing in new projects, customers and markets, but we’re also working on technology.

Ten years out, we’re looking at the microbiome, microbial communities and how we can engineer microbes. I’m looking forward to a time when we know how microbes work together. We’re also thinking about all the things that smell. Someday we want to have something called "the 100 vials." It would be 100 different smells that are created through nature. 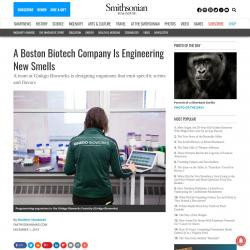