Anne Frank was a German-Jewish teenager who was forced to go into hiding in Nazi-occupied Amsterdam, Holland during the Holocaust. Shortly after receiving a diary for her 13th birthday, the girl started recording entries on June 14, 1942, and she continued writing down her impressions while confined with her family and four other fugitives as they hid behind a bookcase in a concealed attic space in her father's office building.

The young girl's entries were made in the form of letters to several imaginary friends and she also employed pseudonyms to conceal the identities of her fellow fugitives and accomplices. Like many other normal teenagers, Anne agonized over her conflicted feelings about her family and a possible romantic interest, as well as her evolving thoughts about life. But her extraordinary depth and fine literary ability, combined with her optimism in the face of such adversity made her account a literary and historical treasure.

"It's a wonder I haven't abandoned all my ideals," she wrote shortly before her arrest,

they seem so absurd and impractical. Yet I cling to them because I still believe, in spite of everything, that people are truly good at heart… I see the world being slowly transformed into a wilderness, I hear the approaching thunder that, one day, will destroy us too, I feel the suffering of millions. And yet, when I look up at the sky, I somehow feel that everything will change for the better that this cruelty too shall end, that peace and tranquility will return once more.

Anne would end up spending two years and one month closeted in the hideaway, before the group was betrayed and sent off to concentration camps. Of the eight persons in hiding in the attic, only her father would survive. Anne succumbed to typhus in Belsen-Belsen in March 1945. She was just fifteen.

A family friend later retrieved the diary from the attic and presented it to Anne's father after the war. Upon reading it, Otto Frank persevered to get it published.

The diary first appeared in Amsterdam in 1947 and was subsequently published in the U.S. and the United Kingdom as Anne Frank: The Diary of a Young Girl in 1952. Its immense popularity inspired award-winning stage and movie versions.

To date the book has sold more than 30 million copies in 67 languages. The original manuscript was bequeathed to the Netherlands Institute for War Documentation.

This article is excerpted from Scott Christianson's "100 Documents That Changed The World," available November 10. 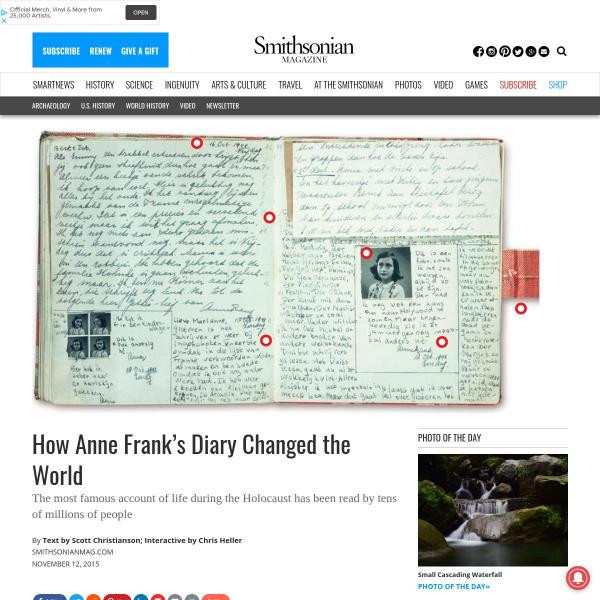