As defined by the U.S. Nuclear Regulatory Commission (NRC), a survey meter is any portable radiation detection instrument especially adapted for inspecting an area or individual to establish the existence and amount of radioactive material present. The survey meter typically measures the amount of radiation present and provides this information on a numerical display in units of counts per minute, counts per second, or microroentgen (µR) or microrem (µrem) per hour. The most commonly used hand-held survey meters are the scintillation counter, which is used in the measurement of alpha, beta and neutron particles; the Geiger counter, widely used for the measurement of alpha, beta and gamma levels; and the ion chamber, which is used for beta, gamma and X-ray measurements.

For background on the development of early survey meters and their nicknames, go to:

The ionization chamber is the simplest of all gas-filled radiation detectors, and is widely used for the detection and measurement of certain types of ionizing radiation; X-rays, gamma rays and beta particles. Conventionally, the term "ionization chamber" is used exclusively to describe those detectors which collect all the charges created by direct ionization within the gas through the application of an electric field. It only uses the discrete charges created by each interaction between the incident radiation and the gas, and does not involve the gas multiplication mechanisms used by other radiation instruments, such as the Geiger-Müller counter or the proportional counter. Ion chambers have a good uniform response to radiation over a wide range of energies and are the preferred means of measuring high levels of gamma radiation. They are widely used in the nuclear power industry, research labs, radiography, radiobiology, and environmental monitoring.

Gray-painted cast aluminum bread loaf-shaped housing, sitting on similarly made 'shoe' surmounting integral pistol grip. Inserted into front of housing is black cylindrical ionization chamber, 8cm (3 in) diam., ca 21 cm (8½ in) long, with window at front end covered by white plastic cap. The chamber has a multi-pin base that plugs into the main unit. The plastic cap contains a calibration source. At the back of housing, facing operator, is 'rate' ammeter. Instrument stands on butt of grip and on two chrome-plated 5 mm diam. wire legs, in form of square loops, that may be rotated around their insertions in front and back of 'shoe' into retracted positions alongside housing. Total length 34 cm (13¼ in), width 8 cm (3¼ in), height 23 cm (9 in). Painted on side of housing: "nuclear-chicago/ Model 2586". Label adhered on bottom of base: "Mod 2586/ Ser 1384/ nuclear-chicago/ Corporation/ Des Plaines, Illinois". RPI Prof. Herbert Clark (letter 1994.5.4) used this instrument during the 1960s.

An alternate, interchangeable, 8 cm (3 1/8 in) diam., black cylindrical ionization chamber with incorporated electrometer tube for extending sensitivity of survey meter .30.1 by a factor of 100. On the cylinder is a two-position switch knob over a label that reads: “P24M / INTEGRATING CHAMBER / RANGE / X0.01 X1 / DO NOT USE WITH X100 / PULL TO REMOVE”. The chamber also has a detachable plastic cap that contains a calibration source. 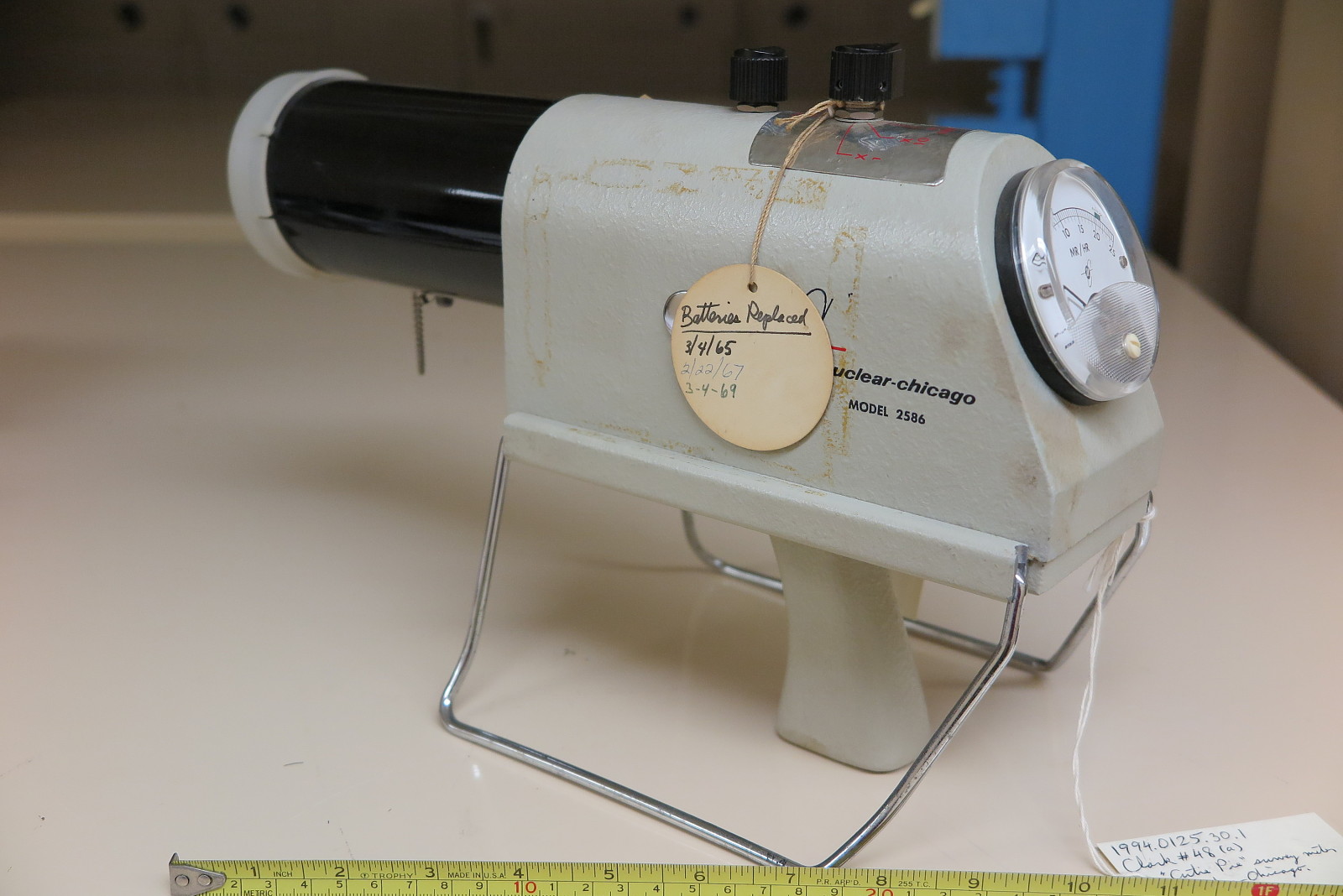 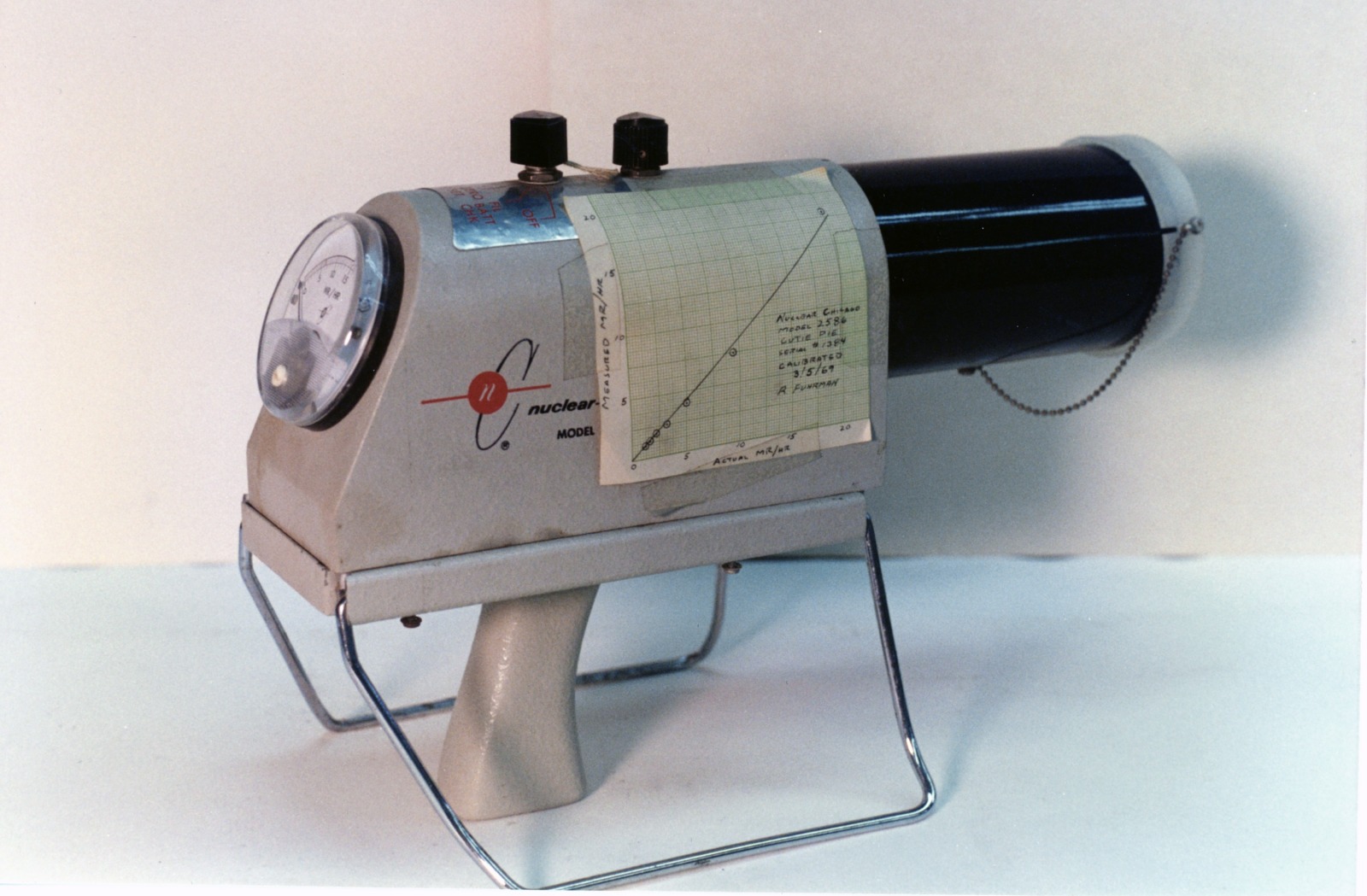