Change Author / Owner : With Humans Away, Animals in National Parks Are Having a Ball

As people stay home, animals have national parks almost entirely to themselves.

At the end of April, the Yosemite National Park Facebook page shared a video sharing the events of the last month. The video shows foxes, deer, bears and a bobcat wandering the park. Some were unusually close to the roads and other infrastructure that are usually populated with visitors. The appearance of animals in usually busy areas might prompt changes in how the space is used when the park reopens.

“As you get people off trails and reduce the amount of human activity and movement in some of these rural-urban areas, wildlife really seem to key into that,” says Montana State University wildlife researcher Tony Clevenger to Discover magazine’s Leslie Nemo.

“It’s not like they aren’t usually here,” Dane Peterson, who works at the hotel, told the Los Angeles Times in April. “It’s that they usually hang back at the edges, or move in the shadows.”

The presence of humans can impact animal behavior in substantial ways, Kaitlyn Gaynor, a wildlife ecologist at the University of California, Santa Barbara, tells Discover magazine. Her research shows that human activity, including hiking, seems to have pushed mammals, including coyotes and deer, to become more nocturnal than they are when humans aren’t around. And roads, when used frequently, cut up national park habitats, so without traffic, animals can safely cross the road to reach food, shelter and mates.

The change could be especially beneficial to bears that are now emerging from winter hibernation and looking for food. In Banff National Park, bears forage south-facing hillsides for snacks, which often leads to conflicts with tourists on the same sunny hillsides, Discover reports.

"Probably the wildlife are really rapidly getting used to having a place to themselves and using areas closer to where people would normally occur but are not found now," University of Alberta biologist Colleen Cassady St. Clair tells CBC. "So I think the big surprises are going to come when those areas reopen."

Gaynor tells Discover that human-wildlife conflicts will probably increase once shelter-in-place orders are lifted and people return to the parks. People are supposed to give national park wildlife a wide berth, exemplified by television reporter Deion Broxton’s reaction to an approaching herd of bison in Yellowstone National Park. Yellowstone normally opens on the first Friday in May, but this year the park remains closed with plans for a staged opening, Ruffin Prevost reports for the Billings Gazette.

Clevenger tells Discover that visitors are the primary conservation concern for the protected habitats—the National Park Service saw record numbers of visitors in total in 2016, with 330 million visits across the United States national parks. Wildlife cameras and GPS collars that were already in use before shelter-in-place orders were declared may reveal new parts of the parks that need added protection, Gaynor tells Discover.

"A lot of the animals that are known to be urban exploiters, as they're sometimes called, are really tremendously flexible in their behavior," St. Clair tells CBC. "They're masters of observing changes in their environment and they respond to them really quickly."

When parks open up again, St. Clair says, “We should be ready to cut [the animals] some slack and to use extra precautions and just double down on all the things we know we should do." 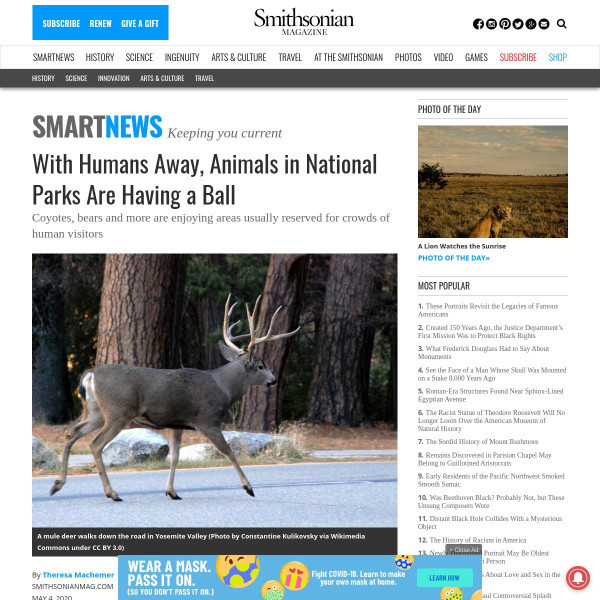