Y Dynfa Lés is projected within a specially built sculpture, giving off a gauze effect as if looking back through time. Photo courtesy of Sean Harris

As a longtime Folklife Festival curator, I am always happy to hear from former Festival participants about how the event “lives on” in creative projects. We recently heard from Sean Harris, one of the animators in the 2009 Wales Smithsonian Cymru program. Sean’s animations, often resulting from collaborations with traditional artists and Welsh school children, bring cultural material to life in amazing and delightful ways.

Over the last year, Sean has been working with several other 2009 Festival participants to produce an animation called Y Dynfa Lés. This Welsh title, as Sean explains, is a little difficult to translate: Y Dynfa is “The Draw” or “The Lure.” Lés comes from glas (an elongated sound in the Maldwyn accent), often translated as “blue” but is in fact a distinct blueish, greenish, silvery color. So here, “glas” is the color of the lush Montgomeryshire landscape, the rivers that flow through it into the Severn, and the Atlantic Ocean at its mouth.

In this animation, the theme of “coming home” is symbolized by the salmon, a fish that is dwindling in Welsh rivers but makes an incredible trans-Atlantic journey of around 14,000 miles. Sean formatted it to project onto a sculpture based on a traditional River Severn putcher, or fish trap, crafted so that it could be set up in parks, near rivers, and elsewhere to interact with the Welsh landscape.

“The piece takes the migration of the salmon as narrative focus—and their unerring return to the very same pools in which they were spawned as metaphor for the powerful call of the home ‘nest’ (i.e. land, language, and culture,” Sean explains. “I love that it all came about as a result of our own salmon-like trans-Atlantic journey to the Folklife Festival!”

The work includes Arwyn Groe Davies’s poem “Grym y Lli’” (The Power of the Flow), which takes the departure of the salmon in the Banw river as metaphor for the steady bleed of young people away from rural Mid-Wales. Siân James, one of Wales’ foremost folk musicians, set Davies’ words to music for the Parti Cut Lloi choir, who also performed at the 2009 Festival.

At the suggestion of fellow Festival artist Christine Mills, Sean, Arwyn, and Siân gathered at the iconic Cann Office pub, spiritual home of Parti Cut Lloi, to work the poem into the soundtrack. On the recording, Christine plays the triple harp and John Neilson (Sean’s hotel roommate during the Festival) plays a ship’s harmonium—fitting the animation beautifully.

“Whilst it’s very much about ‘home,’ a significant part of what has emerged has its roots in the coming-together that was Wales Smithsonian Cymru,” Sean says. “I’m pretty sure that without it, the relationships that enabled it all wouldn’t have been formed. As well as a means of presenting global culture to Americans, it’s a powerful catalyst for those that are fortunate enough to participate in it.”

At an event in Newtown, Mid-Wales, commissioned by the Severn Rivers Trust, the community created lanterns inspired by the migration of the salmon which they paraded across the town before placing them in the River of Light. Photo courtesy of Sean Harris

Betty Belanus curated the Wales Smithsonian Cymru program at the 2009 Smithsonian Folklife Festival and still feels hiraeth (homesickness) thinking of her time in Wales and all the friends she made there. 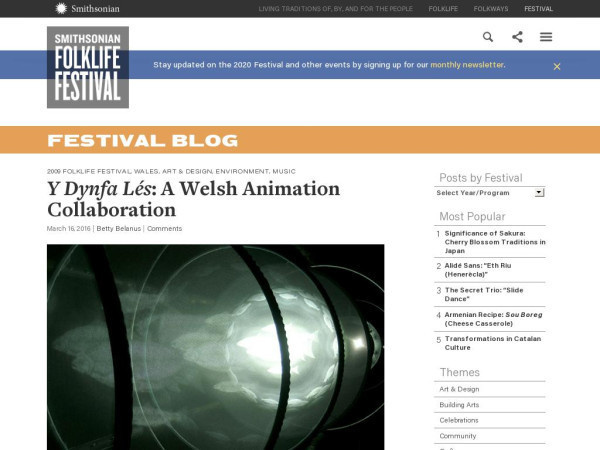