Change Author / Owner : Working Together on the Catalonia Program

There is a reason no two Folklife Festival programs look alike, although the ingredients are the same. Each program is the result of conceptual discussions and many research trips, ultimately resulting in a final list of participants. Yet for every thematic program, we forge new partnerships, oftentimes across borders, and that collaborative practice yields an exceptional process and product every time.

In one of its central messages, the Catalonia program highlights the pervasive role of associations in the daily lives of Catalans. Consequently, we have learned a lot throughout this curatorial process from our partners in Catalonia who have “working together” down to a science. Here is a snapshot of our process from the last ten months.

In May, co-curator Michael Atwood Mason and program coordinator Pablo Molinero-Martinez traveled to Barcelona to hold a series of meetings. The advisory planning meeting brought together representatives from the Department of Traditional and Popular Culture of Catalonia, our program’s main partner and sponsor, along with La Xarxa Comunicació Local, the Association for the Diffusion of Folklore (ADIFOLK), journalists and tradition bearers Ester Plana and Quim Rutllant, independent researchers Meritxell Martin-Pardo and Pablo Giori, and co-curator David Ibánez.

After a long meeting exploring and debating many aspects of Catalan culture, the outcome was a curatorial framework that identifies the main program themes. Essentially, we agreed to tell the story of how Catalans ensure the vitality of their local culture through bold creativity, often inspired by traditions.

At the end of June, Festival director Sabrina Lynn Motley joined us on our next trip. We had the honor of meeting some talented artist: Anxovetes, Criatures, and Joan Garriga and Carles Belda, who embody different Catalan music styles such as havaneras, rumba, messtisatge, and traditional folk. We also attended the Festa Major de les Santes (Mataro) and private rehearsals of the collas castellers (human tower building clubs) from Valls, where we could feel the pride of Catalans celebrating their local popular traditions.

We visited the municipality of Vall d’en Bas, in La Garrotxa (Central Catalonia), composed of six small towns with just over 3,000 residents. Immediately, we could see that this place was replete with examples of community-based cultural heritage enterprise, which is the overall theme of our 2018 Festival. Through these enterprises, they have developed a strong national and global presence.

During that visit, we also organized an orientation course with our researchers, two full-time and six part-time. It was a chance to explain our Festival research process, which we use to identify potential stories and participants and gather material to contextualize their music, craft, foodways, and festival arts presentations.

Families interact with “Imaginario Festivo” in the Mataró city hall, a exhibition showing the beasts, “bigheads,” and giants used in processions and festivals.
Photo by Pablo Molinero-Martinez

The participant selection process started on September, when co-curator Cristina Diaz-Carrera joined the project full time, and we are currently in the final stages. More than 120 individuals and groups submitted their applications, and several dozen more are in consideration for participation in the Festival. It was the first time we used a combined selection process consisting of 1) an open call, allowing individuals and groups from all over Catalonia to apply to perform their traditions and cultural expressions at the Festival, and 2) our traditional research-based approach done by independent researchers based in the region. For the open call, we collaborated with ADIFOLK staff members who have over thirty years of experience organizing the annual APLEC festival of Catalan expressive traditions in different cities in Europe.

Currently, our research team has almost completed interviews with all of our potential participants.  These interviews give us important information about the artist and help us to frame their presentation at the Festival. We have started contacting some of them already, and Mason has met some groups in person when he visited Barcelona at the end of January. He also came back with ideas about how to display engalaments (street decorations from the Festa Major de Gràcia) on the National Mall.

It has been challenging to pick the final 75 participants, in addition to over 200 castellers coming to build human towers at the Festival, but given the diverse and compelling proposals we have before us, it will be a rich program indeed. We hope to have a final participant list very soon.

Cristina Diaz-Carrera is the co-curator for the Catalonia program at the 2018 Folklife Festival, and Pablo Molinero-Martinez is the program coordinator. 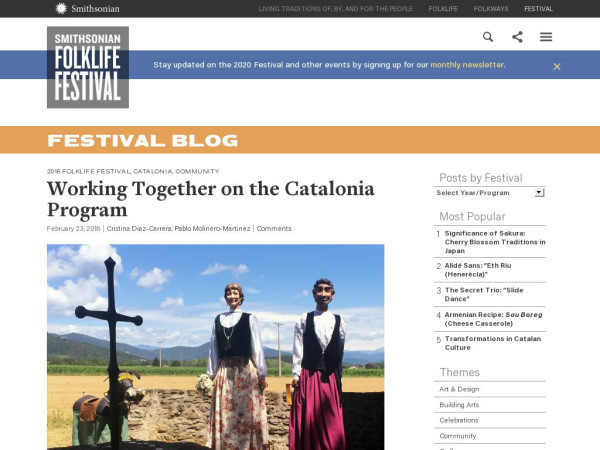