Change Author / Owner : Mexico City Is Proposing to Build One of the World's Largest Urban Parks

Walking along the edge of a seasonally dry lakebed on the eastern outskirts of Mexico City, there is near perfect silence except for the occasional airplane that flies overhead.

These planes flying out of a nearby airport are a reminder of the estimated US$13 billion international airport that had been planned and partially constructed on top of the seasonal wetlands native to this place. Then, in 2018, Mexico’s new president, Andrés Manuel López Obrador, canceled the project and moved forward with plans to construct what would be one of the world’s largest urban parks instead. Experts from around the world hope the project, if successful, will serve as an example to other cities of what is possible in the fight against climate change.

Turning Back the Clock

The size of the proposed park is nearly unfathomable from ground level, covering 12,300 hectares (30,394 acres) and stretching 16 kilometers (10 miles) from end to end. That’s about the size of 36 New York Central Parks or more than twice the size of Manhattan.

The government and the architect behind the park, known as Parque Ecológico Lago de Texcoco, see great potential in the park — particularly in the face of mounting water shortages, floods and climate change. They view this mega project as one that could turn back the clock on disruptions to the region’s water systems dating back to Hernán Cortés and the Spanish siege of Tenochtitlan in 1521.

One of the goals of the project is to merge the concepts of public spaces and green infrastructure, providing hiking trails, sports courts and lakes for recreation, while bringing back the lakes to rebalance the Valley of Mexico’s water system. (Iñaki Echeverría)

The region’s lakes were the primary source of freshwater during Aztec times, but the Spanish drained the valley’s lakes after they took over the city of Tenochtitlan. This forced an independent Mexico centuries later to construct hundreds of miles of pipes to bring in roughly 30 percent of the city’s water and to pump the rest from an underground aquifer. The city is now pumping water out of that aquifer twice as fast as water is returning via rainfall.

On the other side of the equation, the city, which has been largely paved over, floods for months during the rainy season.

“The problem is we cannot turn 500 years of history and go 180 degrees overnight,” says Mexico City architect Iñaki Echeverría, executive director of the park project. “Very few times you are offered the possibility that can have an impact that can really change things. If we manage to do this, it changes the direction of the history of the city and the valley.”

Mexico City architect Iñaki Echeverría, executive director of the park project, speaks about his plans for the project standing next to Lake Nabor Carrillo. (Paul Biasco)

The project is designed to be constructed in the basin of the former Lake Texcoco, which dried as Mexico City expanded into a megacity of more than 20 million people over the past two millennia. The area has not been inhabited and has been off-limits to the public due to annual flooding and infrastructure issues.

Echeverría is seeking to restore the vast majority of the area to its former state, including rejuvenating numerous lakes that were drained, as well as wetland areas. One of the goals of the project is to merge the concepts of public spaces and green infrastructure, providing hiking trails, sports courts and lakes for recreation, while bringing back the lakes to rebalance the Valley of Mexico’s water system. That includes routing stormwater runoff into the wetlands and replenishing aquifers.

“This is really the only space that’s left [in the city] and it’s federal land and it’s untapped,” Echeverría says. “It was going to disappear. Right now there’s a possibility to keep it, so we are really working hard to make this happen as soon as possible, to bring people here to understand that this is not a fantasy. This is something that can happen.”

The government hopes to open up the first section of the park project by 2021, according to Echeverría. The architect, who grew up in Mexico City, says he is feeling the pressure from all angles to complete the project or get each component on the right path before the end of the current presidential administration in 2024.

“People are expecting me to fail. A lot of people. For the right reasons, for the wrong reasons, for every reason,” Echevarría says. “There’s a lot of people betting this will not happen, so of course there’s pressure.”

Lessons for Other Cities

In addition to the water-system goals of the park, the project team is planning for a significant solar power component and is considering wind and biofuels to offset maintenance costs.

“I cannot afford the luxury of just going crazy on the beauty of this place like I used to,” Echeverría says, referring to his previous work designing projects; now, as the director of the entire project, he has to worry about more than just design, such as costs and implementation. “I have to give it the means to maintain itself,” he says. “The means to grow, the means for it not to disappear after this government is gone.”

"If this is successful, a lot of people will go there and learn from it,” says Steffen Lehmann, director of the University of Nevada, Las Vegas, School of Architecture and co-director of the interdisciplinary Urban Futures Lab. (Iñaki Echeverría)

Echeverría had proposed a design for the park 10 years ago, but that plan was quashed to make way for the airport project.

“We thought it was dead for sure and it suddenly comes back to life again. I’m not mystical or anything, but it’s almost like the lake is refusing to die completely,” Echeverría says. “It’s fighting. I think we had to get involved in that fight.”

The government’s decision to dedicate an enormous plot of land for natural area and green infrastructure so near the city center is a progressive one that experts say could affect the future of public spaces around the world.

Lehmann, an internationally recognized architect and author on sustainable architecture and urban design, pointed to New York’s High Line project and the “High Line-ization” of copycat parks around the world as an example.

Other world cities that have completed major urban parks in recent years include Seoul, Moscow and Singapore.

“It’s going to have a huge impact,” Lehmann says of the upcoming Mexico City project. “We need urban forests with climate change, and we need those parks to keep cities cool because of the urban island effect. Cities heat up and store and trap solar radiation and store heat like an oven. It’s underestimated. It’s a big silent killer.”

The edge of what will become parkland is adjacent to some of the poorest neighborhoods in Mexico City, according to Mexico City architect Iñaki Echeverría, executive director of the park project. (Paul Biasco)

The project will also capture carbon and mitigate air pollution.

Lehmann says there is an ongoing struggle against the privatization and urbanization of public space in cities around the world.

“This is the kind of work that cities are hungry for. They are looking for ways to include good local governance practices and good water management practices,” says Raul Pacheco-Vega, a water scholar at Centro de Investigación y Docencia Económicas, a Mexico City-based think tank. “Here you kill three birds with one stone. You improve urban governance by providing more green space, you improve water management, and you showcase measures of adaptation to climate change.”

Echevarría is directing the project for the National Water Commission (Conagua), and has gathered a diverse team of ecologists, architects, planners, landscapers, biologists and politicians to bring the project to life.

The first phase, restoring Lake Nabor Carrillo and building public sporting facilities in a portion adjacent to it, is expected to break ground in early 2020. That portion will also include a 10-kilometer (6-mile) running trail around the lake.

Mexico’s volcanoes Popocatépetl and Iztaccihuatl can be seen on a clear day from Lake Nabor Carrillo. The first phase of Parque Ecológico Lago de Texcoco will be restoring Lake Nabor Carrillo and building public sporting facilities in a portion adjacent to it. (Luis Gallardo)

Eventually, the project will expand to the area where the airport had been partially built and involve restoring the Casa Colorada lake, which will flood the already-built runway and terminal foundations.

“There’s a lot of things that have to happen over there,” Echevarría says, referring to an ongoing legal battle over the canceled airport. “I’ve tried to keep a very cold mind about that. We have so much work to do without even touching that area. We will work on that. From a project stance, we will begin working as soon as it’s legally permitted.”

The project is located roughly 10 miles (16 kilometers) from the city’s Centro Histórico and is directly adjacent to some of the poorest neighborhoods in Mexico City, according to Echevarría.

“It would be something of a life-changing situation if this space could be created and be next to what is the highest rate of crime and highest rate of poverty in the entire metropolitan region,” he says.

The project currently is being funded completely by public money, according to Echevarría; but he says his team is looking into private funders for portions of the site, including the renewable energy production areas.

Preliminary studies required for the project were estimated at US$11.78 million, according to Conagua.

“I think if we manage to do this, it would set a precedent for change worldwide,” Echevarría says. “It’s such a large opportunity to do the right thing. If we manage to do it, everybody would be interested in it. We have to.”

This piece was originally published on Ensia, a nonprofit media outlet published by the Institute on the Environment at the University of Minnesota. 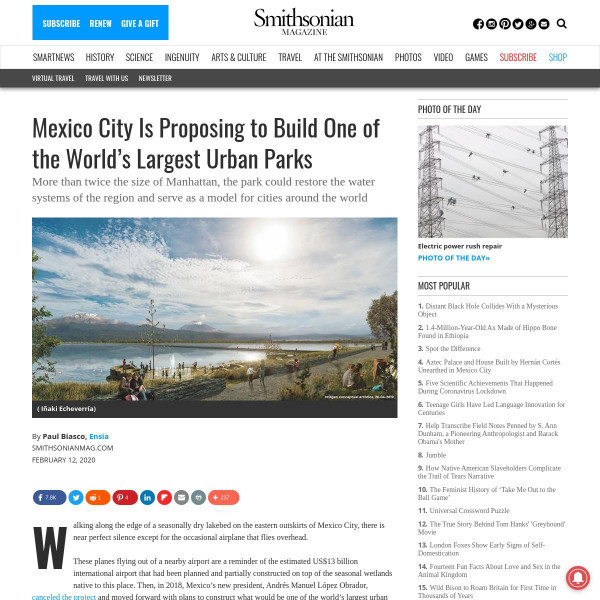