Change Author / Owner : You Can Now Download 150,000 Free Illustrations of the Natural World

Botanical illustrations offer mesmerizingly detailed and vividly colored glimpses of the natural world. Now, reports Hakim Bishara for Hyperallergic, more than 150,000 such artworks are freely available for download via the Biodiversity Heritage Library (BHL), an open-access digital archive that preserves images and documents related to botany, wildlife and biodiversity.

Captured in watercolor paintings, lithograph prints and black-ink linework, the collected illustrations demonstrate the diversity of Earth’s wildlife as observed over hundreds of years. The BHL’s earliest texts date to the mid-1400s; its digital collection includes illustrations as recently created as the early 1900s.

The practice of creating detailed illustrations of flora and fauna, whether to document an expedition or a medical practice, gained popularity well before photography was up to the task. Even today, an illustration can offer more clarity than a photograph.

“An illustration can show various parts of a plant at the same time, something a photo really can’t,” Robin Jess, director of the New York Botanical Garden’s Botanical Art and Illustration program, told the Associated Press’ Katherine Roth in 2019. “It can show extra details of the fruit, for example, and what it looks like bisected.”

Founded in 2006 by a consortium of natural history libraries, among them the Smithsonian Libraries, the BHL launched its online portal the following year. Then 300 titles strong, the database has since grown to more than 200,000 volumes, 150,000 illustrations and information on some 150 million species. Per Hyperallergic, selections range from animal sketches to historical diagrams and botanical studies.

Collected illustrations and digitized pages of preserved plants, called herbaria, provide insights for researchers studying the ways plants have adjusted to a changing climate. Other works, like the zoological sketches of Joseph Wolf, show how societal norms have shaped the ways people imagine animals.

Wolf illustrated two volumes of rare animals depicted in their natural environment rather than the London zoo where they actually lived. In one lithograph, a trio of African elephants stands by a river. As BHL’s Elisa Herrmann points out in a blog entry, the illustration “reflects the ideal of a Victorian family,” with two parents and a child, but fails to capture actual wild elephant behavior. Unlike what’s shown in the illustration, bull elephants are rogue, and adult female elephants have tusks.

The Flora Graeca, compiled by botanist John Sibthorp between 1806 and 1840, exemplifies the importance of illustrators’ field notes. Described by 20th-century botanist W.T. Stearn as “the most costly and beautiful book devoted to any flora,” the text features drawings printed with hand-colored engraved plates based on Austrian artist Ferdinand Lukas Bauer’s trove of 1,000-plus field sketches.

Estimates of the number of animals lost in Australia's recent wildfires do not include insects. (Courtesy of the Biodiversity Heritage Library)

In its mission statement, the BHL cites swiftly changing ecosystems and extinctions as reasons for bringing together a body of knowledge about biodiversity that may help researchers track how the world is changing today. In the wake of Australia’s wildfires, for instance, scientists could make use of this 1907 catalog of Australia’s insects.

Today, writes Adrian Higgins for the Washington Post, botanical illustrators are “rare and becoming as endangered as some of the plants they draw.” The fruits of their labor, however, have and continue to be “essential” for botanists detailing new species or assembling lists of regions’ native plants.

Speaking with the Associated Press, Jess of the New York Botanical Garden explained, “Contemporary botanical artists share a concern for the environment, particularly in light of climate change, as well as for drawing attention to plants.” 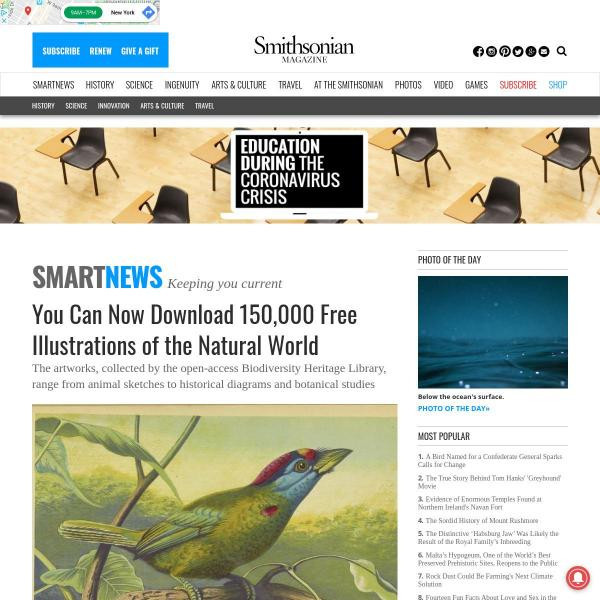