Change Author / Owner : The Evolution of Pregnancy Portraits, From Tudor England to Beyoncé

In 1770, the famed English artist Joshua Reynolds began painting a full-length portrait of his good friend Theresa Parker. By the time the work was completed two years later, the sitter was heavily pregnant; as Parker noted in a letter, she posed for the painting despite being “very fat.” The final product shows the family’s matriarch leaning on a plinth in front of a wooded backdrop, her body draped in an elaborate cascade of fabrics. Her growing belly, however, is not visible.

A mezzotint of this artwork is now on display at the Foundling Museum in London, where it features in a new exhibition exploring artistic depictions of pregnant bodies over the past 500 years. Though fashions fluctuated, pregnancies rarely appeared in portraits prior to the 20th century—this despite the fact that “[h]istorically, from puberty to menopause women would have been pretty much pregnant all the time,” curator Karen Hearn, a historian at University College London who specializes in 16th- to 18th-century British art and culture, tells Rachel Campbell-Johnston of the Times.

The idea for the exhibition, titled “Portraying Pregnancy: From Holbein to Social Media,” was conceived around 20 years ago, when Hearn helped Tate Britain acquire an Elizabethan portrait of a pregnant woman. That work, though not featured in the show, set Hearn down a new path of inquiry.

“I realized such portraits had not previously been studied,” she says to the Art Newspaper’s Margaret Carrigan.

Hearn, who spent the next two decades researching the subject, has curated a diverse and evocative selection of works, the oldest of which dates back to 1526 or 1527. This delicate drawing by Hans Holbein the Younger shows Cicely Heron, daughter of philosopher and statesman Sir Thomas More, gazing off into the distance, her loosened bodice indicating that she is pregnant. A more conspicuous early example comes in the form of a 1620 portrait by Marcus Gheeraerts the Younger, who painted an unknown woman resplendent in an elaborate red dress, her arm resting across her patently pregnant stomach.

From the 1560s to approximately 1630, pregnancy portraits were in fact quite common in England, explains Carrigan to the Times—but for centuries afterwards, they were quite rare. Part of the reluctance over depicting pregnant bodies may have stemmed from conservative social mores.

Pregnancy, as Hearn tells Lucy Davies of the Telegraph, offered “visible evidence that a woman was sexually active. Even in marriage, when pregnancy was desirable, it remained problematic. That was the default position for centuries.”

Historical images that do exist were infused with additional tension due to the high rates of maternal death during childbirth. Per a statement, portraits like the one by Gheeraerts the Younger appeared at a time when women would write “mother’s legacy” letters to their unborn children in case they did not survive the delivery. Theresa Parker, the subject of Reynolds’ painting, died soon after giving birth to a daughter in 1775, according to Davies.

An 1817 portrait by George Dawe shows yet another woman who died in childbirth: Princess Charlotte of Wales, daughter of George IV and heir to the British throne. In Dawe’s painting, the princess wears a loose, Russian-style dress that conceals her pregnancy. She died in November of 1817 after giving birth to a stillborn boy.

Attitudes towards pregnancy portraits began to soften in the late 20th century, as artists grew bolder in depicting both the wonders and tribulations of pregnancy. In 1984, for instance, Ghislaine Howard produced a powerful self-portrait showing the later stages of her pregnancy; the figurative artist can be seen slumped in a chair, highlighting the physical strains of her condition.

But the true shift, says the Foundling Museum, came in 1991, when Annie Leibovitz’s photographic portrait of Demi Moore, naked and seven months pregnant, appeared on the cover of Vanity Fair. Shocked by the image, some retailers refused to stock the magazine.

“Nevertheless,” writes the museum, “it marked a culture shift and initiated the trend for more visible celebrations of pregnant bodies—especially nude ones.”

The final portrait to appear in the exhibition is Awol Erizku’s now-iconic photograph of Beyoncé, who enlisted the artist to help announce her pregnancy. Draped in a veil, the singer kneels on an ornate flower arrangement and gazes proudly at the viewer, cradling her stomach. The image threw the internet into a tizzy and became the most-liked Instagram photo of 2017.

As Beyoncé’s portrait suggests, modern women are taking unprecedented agency over their pregnant bodies, celebrating this phase as a time of beauty and empowerment. But the new exhibition shows that even in the past, when women’s pregnancies were often concealed, expectant mothers didn’t shrink from public view.

“[M]any of our current ideas about the lives and activities of women in past centuries need to be revised,” Hearn tells the Art Newspaper, “as we come to understand how frequently many of them were conducting active public roles while pregnant.”

“Portraying Pregnancy: From Holbein to Social Media” is on view at the Foundling Museum in London from January 25 to April 26. 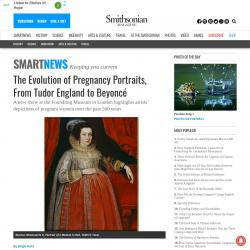