More Than One Billion Animals Have Been Killed in Australia’s Wildfires, Scientist Estimates
Description

The devastating fires raging across Australia have exacted a terrible human toll, killing at least 25 people, driving residents from their homes, and burning through some 2,000 houses. But the impact of the fires on Australia’s environment and unique wildlife is simply staggering. As Josephine Harvey reports for the Huffington Post, one scientist has estimated that more than one billion animals have died as a result of the conflagrations.

This new figure comes from Chris Dickman, an ecologist at the University of Sydney, who earlier this month estimated that 480 million animals had died in the state of New South Wales since fires first erupted there in September. That number was based on a 2007 report for the World Wide Fund for Nature about the impacts of land-clearing on the state’s wildlife. the authors of the report looked at previously published studies to estimate animal population densities in New South Wales, then multiplied the densities by the areas of vegetation approved for clearing.

But the 480 million estimate “now is a little bit out of date,” Dickman tells Harvey. The figure exclusively accounted for animals in New South Wales, but the fires have been spreading in other states. Now, Dickman says it is more likely that 800 million animals have died in New South Wales, and more than one billion have been killed nationally.

One billion is a tremendous number, but it may in fact be “a very conservative figure,” Dickman says. His updated estimate includes mammals, birds and reptiles—because there is good data on their population densities—but does not include insects, bats or frogs, reports Denise Chow of NBC News.

Some experts, however, think that Dickman’s estimates are inflated. Colin Beale, an ecologist from University of York, tells the BBC that birds, for instance, are likely able to fly away from the fires, while reptiles may be able to burrow into the ground to escape the flames. But there is no question that Australia is in the throes of an ecological disaster. Bushfires have now burned through more than 12 million acres—“an area larger than Maryland,” notes Cormac Farrell in an opinion piece for the New York Times. Wildlife habitats are being destroyed, so even when it comes to animals that are not killed by the fires, “we may still ask whether they will survive longer-term,” Beale says.

As heartrending photos of burnt and bandaged creatures have revealed, some animals are not able to escape the flames sweeping through their environment. Slow-moving Koalas, for instance, have been hit hard by the fires. An estimated 8,000 of the marsupials have died in New South Wales—about a third of the total population in the state. Dickman and his colleagues recently estimated that “most of the range and population” of between 20 and 100 threatened species—among them the glossy black cockatoo and a small marsupial known as the long-footed potoroo—have been burned.

“Most will have been killed by the fires themselves,” the researchers explained, “or due to a lack of food and shelter in the aftermath.”

Australia boasts a rich array of native species, many of which can only be found within the country. But Australia’s biodiversity was already struggling before the fires. According to the University of Sydney, “Some 34 species and subspecies of native mammals have become extinct in Australia over the last 200 years, the highest rate of loss for any region in the world.” Dickman tells NPR that the raging bushfires “may well hasten the extinction process for a range of other species.”

Wildfires have long been a part of Australia’s natural history, but experts say that the country’s fire season has become longer and more extreme due to climate change, which, among other things, has been linked to the hot and dry conditions that fuel wildfires. Australia is the world’s fourth largest producer of coal and is responsible for 1.3 percent of global greenhouse gas emissions. Activists have called on Australia’s government to do more to cut down on greenhouse gases—something that Prime Minister Scott Morrison has proved reluctant to do.

According to Dickman, the situation in Australia should serve as a warning sign for the rest of the planet. “Sometimes, it's said too that Australia is the canary in the coal mine, with the effects of climate change being seen here most severely and earliest, as well,” he tells NPR. “We're probably looking at what climate change may look like for other parts of the world in the first stages in Australia at the moment.” 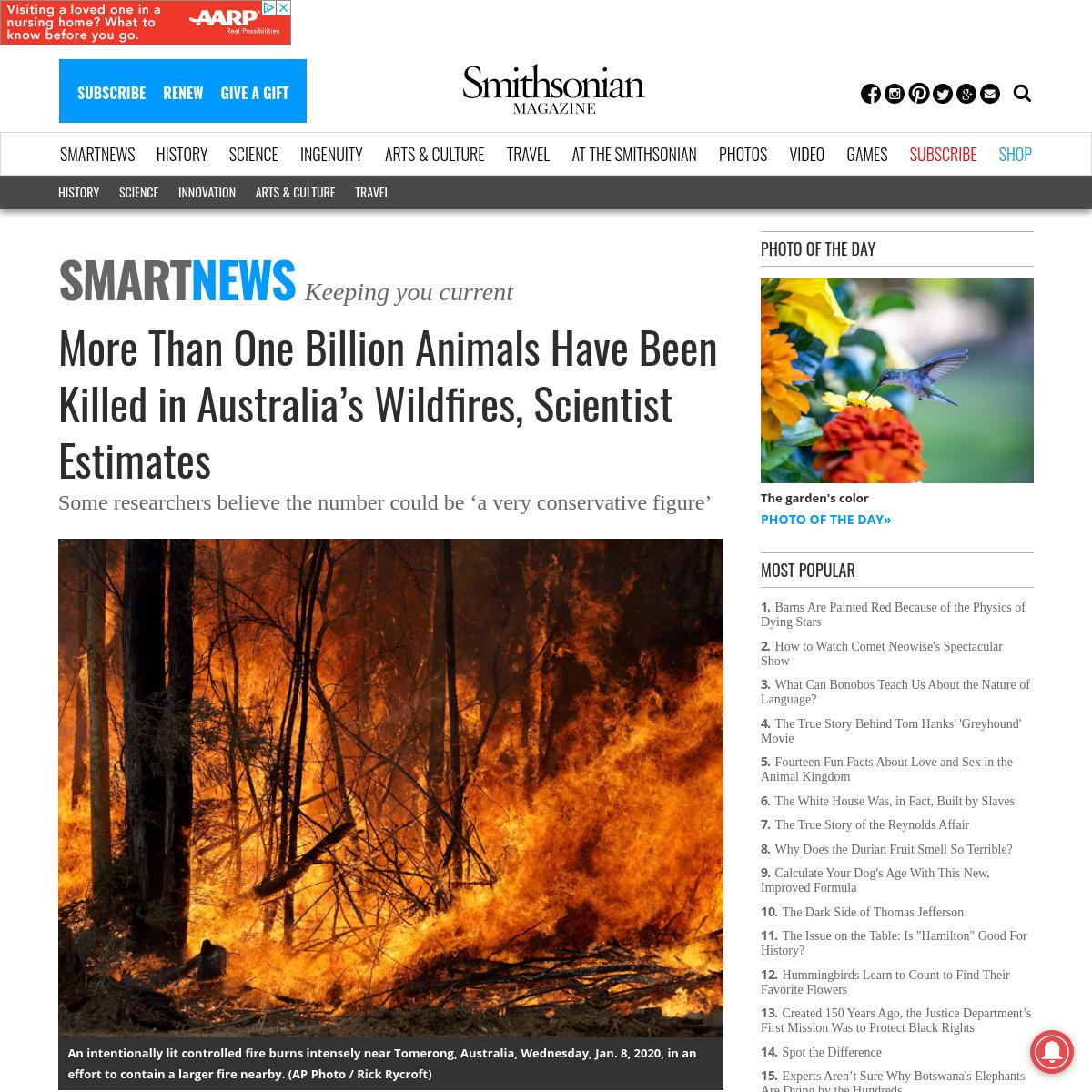