Change Author / Owner : Report upon United States Geographical surveys west of the one hundredth meridian / in charge of Capt. Geo. M. Wheeler ; under the direction of the Chief of Engineers, U.S. Army ; published by authority of the Honorable the Secretary of War, in accordance with acts of Congress of June 23, 1874, and February 15, 1875 ; in seven volumes and one supplement, accompanied by one topographic and one geologic atlas

In addition to the 2 atlases named, maps based on the maps of the Topographical atlas were issued as Land classification series, and special maps (not accompanying reports) showing the results of some preliminary reconnaissance or of some survey of an area of peculiar interest were issued irregularly.

Volume 5, Chapter 3 also issued separately as: Report upon the ornithological collections made in portions of Nevada, Utah, California, Colorado, New Mexico, and Arizona, during the years 1871, 1872, 1873, and 1874 / by H.W Henshaw.

Some volumes published out of numerical order.

"12 photolithographs (heavily retouched), 3 chromolithographs. The photographs are by T.H. O'Sullivan and William Bell. These views, typical of the toned photolithographs published in Government reports, are striking scenes of the Western landscape, translated to this medium with a great deal of graphic richness. This title is also of prime importance because it lists every photographer for every one of the Government's surveys"--Hanson Collection catalog, page 100. 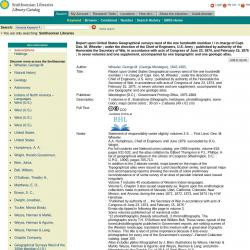