Change Author / Owner : Yes, Tropical Forests Tragically Burned This Summer, but Here’s What You Can Do

In August, the world’s attention turned towards the fires in the Amazon, and even as those continued to burn, fires erupted across Borneo and Sumatra. Alarm is warranted—the estimated emissions from burning to date of more than one billion tons of carbon dioxide (CO2) will have a greater impact on Earth’s climate than if every U.S. adult drove an additional 30 miles per day for a year. And that loss is not reversible within the time frame remaining to achieve net zero greenhouse gas emissions, or live with severe consequences of warming over 1.5 degrees Celcius.

These numbers don’t count the risk of upsetting regional and even global rainfall generated by these great forests pumping water into the atmosphere. They don’t count the fact that we’re losing some of Earth’s most biodiverse forests. They don’t include the infringement these fires have had on the one million indigenous peoples living in the Amazon, including uncontacted communities, that are seeing their lands burned and their homes threatened. And they don’t account for the sickening of thousands of people—especially children—subjected to smoke that turned skies black in Brazil and red in Indonesia.

Although this year's fires are dying down, such events happen every year, with some years worse than others. It is critical that we understand the significance of these fires and how we can best respond. Solving this problem will require collective awareness and action.

This problem isn’t caused so much by the people of Brazil—a country that I’m honored to have married into; my husband is from the small town of Itaquara, Bahia—or the people of other tropical countries. People from these countries have far more to lose than we do in North America.

In fact, the fires are driven by consumption patterns here and around the world. The tragedy is that only a few people—or corporations—gain at the expense of just about everyone else on the planet—and of course at the expense of incredibly biodiverse and climatically important forests.

Much of the burning is linked to deforestation, and sometimes the fire spreads beyond land being torched for agriculture into the surrounding forest. In the Amazon, deforestation is being driven by a sudden increase in demand for soy, and encouraged in Brazil by anti-environmental rhetoric. In southeast Asia, it’s driven primarily by expansion of the palm oil, pulp and paper industries.

The Amazon, the world’s largest tropical forest, is often referred to as the lungs of the world, and while the forest does produce a lot of oxygen, a much more critical function is its ability for “breathing in” and storing the carbon dioxide (CO2) that would otherwise be in the atmosphere and contribute to warming.

If we examine a typical patch of Amazonian rainforest the size of a parking spot, about 9- by 18-feet, the living trees that have been growing there over the decades or centuries have removed 615 pounds of carbon from the atmosphere. The dead organic materials and the soils contain an additional 470 pounds that would be vulnerable to loss upon deforestation.

When the trees are felled and subsequently burned and the land converted to agricultural use, this carbon is immediately or eventually released as CO2, along with the greenhouse gases nitrous oxide (N2O) and methane (CH4) in the smoke. Moreover, the forest stops sequestering carbon dioxide (CO2).

But it goes beyond carbon. As forests “breath” in CO2, they release water vapor to the air. Like human sweating—this water vapor cools the land surface as liquid water is converted to vapor.

Altogether, the climate cost of clearing this parking spot-sized forest patch would ultimately be about equivalent to driving a car with average U.S. gas mileage approximately 5,500 miles—about the distance of a round trip between New York City and San Diego, California. And the 2019 Amazon fires burned more than 1.2 billion parking spot spaces, much of which was previously intact rainforest.

Much of the burning is linked to deforestation, and sometimes the fire spreads beyond land being torched for agriculture into the surrounding forest. (Getty Images, NurPhoto, Contributor)

Further still, the water vapor that’s been released by the “breathing” of the forest goes on to form clouds and, eventually, precipitation elsewhere. In our parking space-sized patch of forest, trees draw water from the soil and release it as vapor to the atmosphere at a rate of about 10 gallons per day. This moisture is absorbed by air passing over the Amazon, and this air will eventually produce at least twice as much rain as air that has not passed over extensive forest.

Much of this precipitation falls within the Amazonian region, and some of it falls elsewhere in South America—especially regions to the southeast, including Brazil’s most populous and agriculturally productive region. But the precipitation travels further still. Through global “teleconnections” in the climate system, the moisture produced by the Amazon influences global circulation patterns, affecting growing season precipitation in the Midwestern U.S. and snowfall in California and the Pacific Northwest.

And this is where it gets really serious. If too much of the Amazon is lost, this critical moisture pump will weaken and may become insufficient in providing the needed moisture to the remaining forest, resulting in a feedback cycle of drying, forest loss and further drying. This drying could affect agricultural regions elsewhere in Brazil, impacting millions.

How much forest loss would push us over this dangerous tipping point? Scientists who are best equipped to make a judgement call on this critical estimate are saying that the forest that we have right now is right at the size that it needs to be. We can’t afford to lose much more of it.

And that’s just the climate story.

The Smithsonian-led Forest Global Earth Observator (ForestGEO) has three large forest research plots in the Amazon—Amacayacu in Colombia (above), Yasuni in Ecuador and Manaus in Brazil. (Pipe Jiménez)

These forests are incredibly diverse. The Smithsonian-led Forest Global Earth Observator (ForestGEO), for which I lead the Ecosystems and Climate research program, has three large forest research plots in the Amazon—Amacayacu in Colombia, Yasuni in Ecuador and Manaus in Brazil. In any one of these plots, each roughly 62 acres in size, there are as many as 1,000 different species of tree, more than in all of North America combined. Because there’s little species overlap across sites, the three plots together have about three times as many species. The entire Amazon Basin has an estimated 16,000 tree species. That’s just trees—other biological taxa have outstanding diversity as well. This biodiversity isn’t even fully characterized yet; only about 70 percent of the tree species in our ForestGEO plots have been fully identified, and biological expeditions are constantly discovering new species. We don’t even know what we’re losing, but we do know that this incredible biodiversity is important for maintaining ecological function—particularly under a changing and more extreme climate—and that it provides multiple ecosystem services.

The tropical forests of Indonesia are similarly valuable for climate, biodiversity and people. These are peat forests, which have the highest climate regulating values on a per-area basis of any ecosystem on Earth—more than three times that of Amazonian tropical forest. Once again, the flora of the region is highly diverse and includes the world’s tallest tropical trees, and the fauna includes orangutans, Sumatran tigers, Sumatran rhinos and elephants.

The scale of this problem is enormous. There are no quick and easy solutions. In the immediate term, the loss of so much Amazonian and southeast Asian forest is an unmitigated disaster. But how can we take this tragedy—and the attention it brings to the issue of tropical deforestation—and use it as a lesson?

An important first step is understanding how tropical forests worldwide, climate, and the food and other products that we consume are all interconnected on the global scale. Collectively we can have a real impact.

Land is an increasingly limited resource, and how we use it has a big impact on our climate, as has recently been documented in the IPCC report on climate change and land. “Human use directly affects more than 70% (likely 69-76%) of the global, ice-free land surface,” the report points out. “Land also plays an important role in the climate system.”

There’s a fundamental competition between using land for agriculture, which altogether contributes 21 to 37 percent of total net anthropogenic greenhouse gas emissions, and protecting or restoring forests, which of course are valuable for protecting Earth’s climate. Agricultural land emits greenhouse gases—primarily the potent greenhouse gas nitrous oxide as a biproduct of nitrogen fertilizer and methane from enteric fermentation by cattle and sheep—and of course it also takes up land that could be covered by forest.

What we eat can have a big impact on our carbon footprint. According to a recent study summarized in a New York Times interactive report, meeting the typical body’s need for about 50 grams of protein per day through beef for one year would have about the same climate impact as driving all of the way around the Earth, whereas getting the same protein from tofu, nuts or beans would have a small fraction (less than four percent) of this climate cost.

Conserving mature forests, with their enormous climate regulation values, is among the most effective things we can do to slow climate change, and forest restoration is also effective, as young, rapidly growing forests suck a lot of CO2 out of the air. Allowing tropical forest regrowth in a parking space-sized patch of land has a climate impact over 50 years as avoiding driving about 2,000 miles.

There are ways to help, including supporting groups that buy and protect forested land in the tropics. For the price of a fast food hamburger or a latte, you can protect enough land in the Peruvian Amazon to offset over 9 million driving miles.

While it is impossible to live in a modern society without consuming products that have contributed to deforestation or other environmental damage, being aware of what’s behind various products can allow us to make choices that reflect our values. Responsible consumer choices add up to a real impact, and consumer pressure can and does alter business practices for the better.

Take the time to do research and find information on how various products and companies score in terms of their impact on environment and human rights. Product labeling campaigns, such as the Rainforest Alliance Certified seal helps to indicate rainforest-safe products. The Forest Stewardship Council identifies responsible sources of forest products. The Roundtable on Sustainable Palm Oil (RSPO) certifies more sustainable palm oil practices. And the Bird Friendly coffee certification of the Smithsonian’s Migratory Bird Center helps to identify more sustainable alternatives.

The 2019 fires in the Amazon and southeast Asia greatly surpassed those in the two previous years and this is deeply disturbing. The forces driving this are powerful. However, we all face everyday choices that matter, and choosing to forego a hamburger and instead donate $5 to conserve Amazonian forest will make a difference. 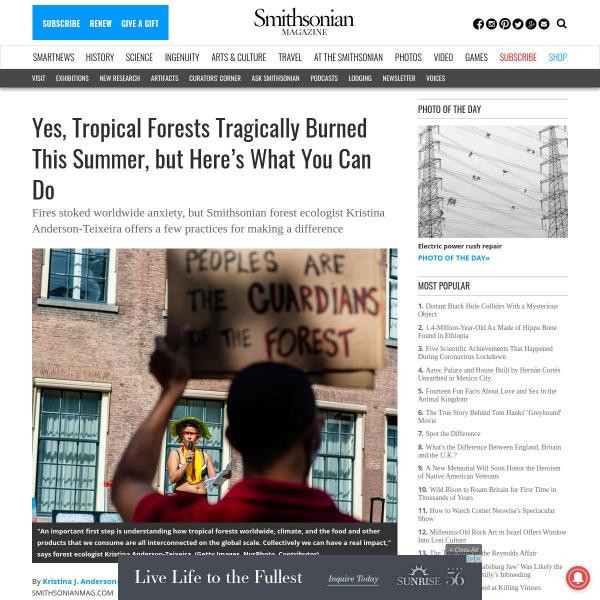