When Cokie Roberts started out in journalism in the 1960s, the constant refrain she heard from men in the business was “we don’t hire women to do that.”

But the congressional journalist and political commentator—who died at age 75 on Tuesday "due to complications from breast cancer," according to a family statement—carved her own space in the industry and, in the process, helped transform the role of women in the newsroom.

“It was very difficult,” Roberts later said in an interview with Smithsonian Associates’ Paul Vogelzang. “When you moved up through the ranks you were often the only women there. When people finally put women on the air, they basically had their one woman and that was it.”

The daughter “of prominent U.S. Representatives Hale Boggs and Lindy Boggs, who represented a New Orleans-centered district for half a century,” as a biography and oral history by the U.S. House explains, her early memories were filled with moments like “riding the old Senate subway, with its wicker seats; accompanying her father on the House Floor on the Opening Day of Congress in the late 1940s; prodding her father to speak out on the floor in support of the Voting Rights Act of 1965; and listening to prominent dinner guests such as Speaker Sam Rayburn of Texas.”

Because of her family’s history, Roberts—born Mary Martha Corinne Morrison Claiborne Boggs in New Orleans, Louisiana, in 1943, but known as “Cokie” since childhood because her brother couldn't pronounce Corinne—never questioned that she would get into politics in some capacity. All of those formative years spent at the Capitol and House of Representatives made an impact. "I became deeply committed to the American system,” she recalled in the oral history project, “And as close up and as personally as I saw it and saw all of the flaws, I understood all of the glories of it.”

But rather than run for office herself, which she worried would cause difficulties for her husband, journalist Steve Roberts, she chose to cover Capitol Hill as a reporter. By the 1980s she’d risen to national prominence as a journalist for NPR and ABC News.

In a statement, NPR president and CEO Jarl Mohn praised her “signature voice and commentary…[which] accompanied public radio listeners, provided context for news and [has] been a familiar presence in their homes." Roberts, who joined the broadcasting company in 1978 to report on the Panama Canal Treaty, was, as Mohn added, seen as "one of NPR's 'founding mothers,'” alongside journalists such as Nina Totenberg, Linda Wertheimer and Susan Stamberg. (The reason there was some space for women at NPR early on, of course, was because the pay was significantly less than what commercial networks of the day were offering, as NPR national political correspondent Mara Liasson pointed out in an interview earlier this year.)

Throughout her career, Roberts was widely respected by her peers in media and by the politicians she covered on both sides of the political aisle. As Neil Genzlinger writes in her New York Times obituary, in the wake of Roberts’ death, Representative Eric Swalwell, a California Democrat recalled on Twitter, for instance, “a 2001 talk in which she ‘encouraged all of us, Republicans and Democrats, to always seek consensus where we could.’”

Perhaps because she was long accustomed to being one of the few women in the room, Roberts also paid special attention to women’s history. It was, in fact, because of her depth of knowledge on the first ladies of the United States that Kim Sajet, director of the Smithsonian’s National Portrait Gallery, invited her to speak on the museum’s "Portraits" podcast this summer.

Sajet remembers first meeting Roberts many years ago during her tenure as the president of the Historical Society of Pennsylvania. “She was just incredibly smart and incredibly funny. She really knew her homework and was quite irreverent as well,” Sajet says, adding that Roberts "looked at history at a 90-foot height and can fill in the history with all these interesting details."

Tellingly, she says, when asked before the podcast which of the presidents' wives she wanted to focus on, Dolley Madison was among her top picks. The fourth first lady, says Sajet, embodied a model of dealing with Washington society that Roberts, in a way, cast her own career after.

“It didn’t matter where you were on politics, Dolley would bring anyone into her drawing room. Everyone could talk it through and work it out," says Sajet. "That was one of the things Cokie was admiring of, I believe, that Dolley brought people of different opinion together in a respectful and open way to talk." 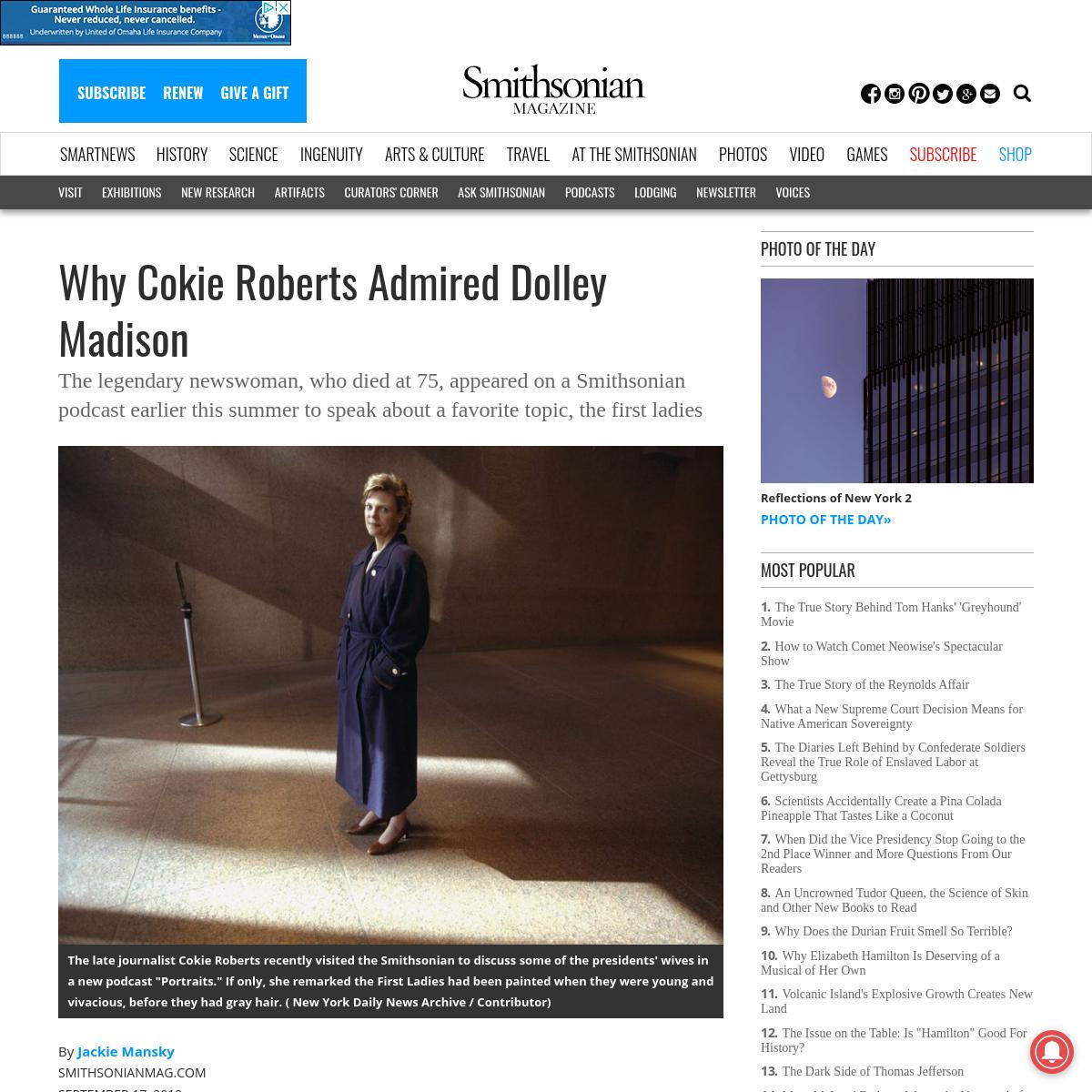