Fires raging across Bolivia’s forests and grasslands have razed 4.2 million acres since May. The blazes—largely believed to be started by farmers intentionally clearing land for agricultural use—pose a threat to some 500 animal species, including jaguars, tapirs and parrots. As Agence-France Presse reports, the consequences of this unusually serious fire season aren’t limited to living creatures: Archaeologists say the infernos are also destroying Bolivia’s famed rock art.

“We believe that the damage is big and wide in terms of our heritage of rock art,” Danilo Drakic, chief archaeologist of the eastern Santa Cruz region, tells AFP.

The eastern town of Robore, which is home to sites of engravings dating to as early as 1,500 B.C., has sustained significant damage in recent months. Based on an initial assessment, Drakic says a “dark layer of soot” has blanketed all of the images, while heat from the fires has “caused stones to break, even to collapse.” Archaeologists will only be able to gauge the full extent of the devastation once the blazes have been extinguished.

According to Bolivia’s Rock Art Research Society, or SIARB, the country is home to more than 1,000 rock carving and painting sites. These artistic renderings grace the walls of small caves and rock shelters, as well the sides of vertical cliffs and large boulders. Spanning several millennia, the drawings range from a nearly 6-foot-long stylized serpent found at the El Buey Rock Shelter to the village of Calacala’s llama engravings and Peña Colorada’s abstract geometric patterns.

Bolivia’s oldest rock art dates to the Paleo-Indian period, which began with early humans’ arrival in the Americas around 12000 B.C. Per SIARB, other examples date to the pre-Inca period, the Inca occupation of Bolivia, and the colonial and republican eras. Almost all of the images refer to religion, either overtly (some representations painted during the 19th and 20th centuries depict saints) or implicitly (certain battle scenes carry both historic and ritualistic connotations).

A number of archaeological sites have escaped the flames unscathed—at least so far. As CNN Español’s Francho Barón reports, rock paintings in El Parque el Manantial are among the artistic renderings still intact.

In addition to threatening Bolivia’s rock art, the fires are poised to damage the Jesuit Missions of the Chiquitos, an Unesco World Heritage Site constituting six 17th- and 18th-century settlements. Although Culture and Tourism Minister Wilma Alanoca told state media that the blazes have “not yet … affected” the Jesuit sites, she added, “There is no doubt that there is an impact on the intangible heritage of the area, which will have to be evaluated once all heat sources are eradicated, which is a priority for the central government.”

According to the New York Times’ Anatoly Kurmanaev and Monica Machicao, this year’s fire season has been far larger and more widespread than previous ones. Per an estimate by Bolivia’s land management authority, some 87 percent of the wildfires were illegally set by farmers emboldened by President Evo Morales’ pro-agribusiness policies—a situation with clear echoes of neighboring Brazil, which has lost more than 7,000 square miles of land to manmade fires this year to date.

Speaking with the Times, Miguel Crespo of nonprofit environmental group Probioma says it could take up to 200 years for Bolivia’s forests to recover from the flames. He adds, “I’ve never seen an environmental tragedy on this scale.” 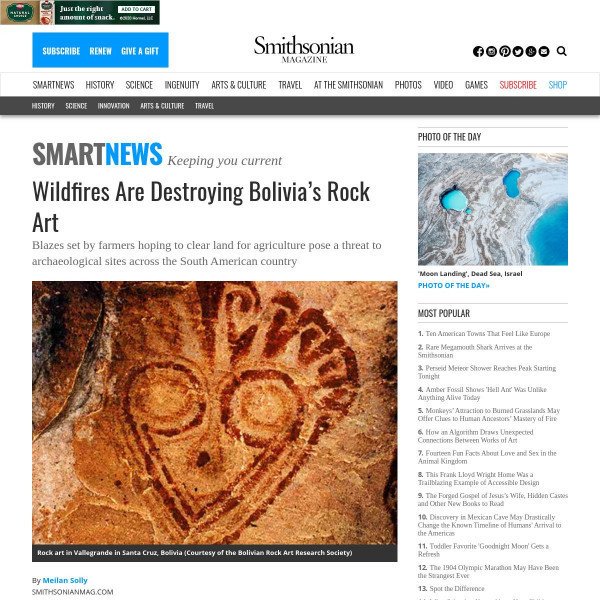