For many, the word “art” conjures thoughts of haughtiness and stuffy galleries, of ornate salons and elites hobnobbing over cocktails. The stereotypical museum experience, though less accurate than it used to be, puts art on display at a remove, as the product of some walled-off portion of society to which the hoi polloi have no access. This year’s By the People art festival in Washington, D.C., which began on June 15 and will continue through June 23, completely overturns this notion of art in its celebration of participatory works with strong ties to the communities and cultures of everyday people.

Launched last year by the nonprofit Halcyon, which seeks to support civic-minded artists and social entrepreneurs, By the People showcases art emblematic of the democratic ideals of America and the nation’s frequent struggles to live up to them. It is a festival rooted in lived experience, human interaction and history, and it is unfolding this week and coming weekend across D.C., including the Smithsonian Arts and Industries Building and Union Market. In keeping with its mission, the festival is free to attend.

On opening weekend, Smithsonian spoke with several of the artists whose wide-ranging work is on exhibit at the Arts and Industries Building, located on the National Mall. Here’s what they had to say on their featured pieces and their approach to By the People’s core themes:

Adaptation examines the ways in which both art and history are shaped and reshaped over time. (Chris Ferenzi)

Virginia-born sculptor Martha Jackson Jarvis has long been known for her thoughtful mixed-media evocations of black and indigenous communities and the spaces they inhabit. At By the People 2019, Jarvis is exhibiting a piece called Adaptation, which centers on an assortment of large, abstractly painted rectangular blocks laid out across a wide stretch of floor—some in direct contact with it, some held aloft with lean metal scaffolding. Overhead, primary-source historical texts printed on semitransparent cotton descend from a vaulted ceiling like stately ghosts.

Jarvis explains that her piece was inspired by the life story of a distant great-grandfather named Luke Valentine, a freeman who was living in Virginia when the Revolutionary War broke out and who ventured north as a militiaman to do battle with the British. When he was older, Valentine was called into court to demonstrate that he had in fact participated in the war. “He got signatures from two of the generals he served under proving that he deserved his pension,” Jarvis says. She found Valentine’s “personal involvement with the urgency of his time” moving and transcendent; the documents featured in the exhibit pertain directly to Valentine’s assertion of his identity.

Each face of the blocks, meanwhile, depicts a different stage in the process of an ambitious painting project by Jarvis herself. She wanted Adaptation to offer a kind of behind-the-scenes look at the long journey of creating an artistic product. Just as each step of her process contributed to a grand, cohesive artwork, so too did each individual living in any given historical moment—like Luke Valentine—contribute to grand changes in their societies. Above all, Jarvis hopes her piece is an empowering reminder of our ability as individuals to contribute to the ever-evolving landscape of history. “We all have an extraordinary power in the process of what happens,” she says.

Ada Pinkston, More than a number

With More than a number, Ada Pinkston set out to do the seemingly possible: memorialize 272 little-known historical figures in an intimate way. (Chris Ferenzi)

Complementary to Jarvis’s meditation on time and influence is young mixed-media artist Ada Pinkston’s take on time and memory, More than a number. Rather than focus on a well-documented single individual, Pinkston chose instead to pay homage to a collection of lives overlooked by conventional history: the 272 enslaved laborers sold in 1838 by Georgetown University’s Jesuit president to keep his school afloat.

More than a number consists of a collection of disparately proportioned boxy white blocks painted with forking blue streaks suggestive of tree branches. The quantity and closeness of the blocks taken together with the interconnectivity of their branch imagery and the simple elegance of Pinkston’s painting captures well the concept of 272 unique human souls bound together in a moment yet shunted from the history books and rendered anonymous.

These visuals are accompanied by audio recordings of living descendants of the enslaved men and women in question that continually play in the space the exhibit occupies. These recordings breathe life into the unknown 272 and give what could be a tragic piece a surprising triumphant quality. Pinkston hopes it spurs visitors to consider the histories of their own families and reflect on the gaps in the historical record in which meaningful people lived out their lives.

“How do we honor the lives of people we don’t know a lot about?” asks Pinkston. “I want people to consider moments like these with more reverence.”

Fiber artist Rania Hassan finds beauty in the coincidence of disparate people occupying the same moment in space and time together. (Courtesy of the artist)

Where Pinkston draws on arboreal imagery to suggest connection across time and space, fiber and wood artist Rania Hassan invokes strands of thread. When you knit something, she notes, “the whole structure is from a single line of thread. To me that’s really inspiring, because my work is about connection and how we’re all interconnected.” Threads can also be interwoven, of course, like the stories of people moving through places and moments together. These thoughts inform much of Hassan’s work.

Hassan’s featured piece at By the People this year is Paths 7, part of a series examining the threads we follow as we make decisions throughout our lives—decisions which we often come to regret. Paths 7, a repudiation of this regret, takes the form of a strikingly symmetrical pile of gold leaf situated just beneath the tip of a drop spindle pendulum. It’s a clean, beautiful image that suggests serenity and perfection. Hassan sees it as a cosmic “You Are Here” sign.

Hassan explains that the wondrous quality of the piece arose from her own wonder at the fact that everyone who would be seeing it at the festival would have arrived at the exact same place and moment in Washington, D.C. despite having followed completely unique paths in their lives up until then. She finds a kind of reassuring solidarity in that—the inevitable confluences of all our respective strands through time. “All of your stories are colliding at the same time,” she says. “This is where you’re meant to be. Everything you’ve done has brought you right here.”

Jonathan Rosen abruptly pivoted from a career in advertising to the life of an artist, so he, too, spends a lot of his time thinking about the paths not taken. In particular, he is fascinated by dreams and saddened at the ways in which life’s constraints so often lead us to abandon them.

“A lot of times we’re told by our bosses, by our parents, by religion, by society that we’re not allowed to have dreams, or that dreaming is wrong,” Rosen says. “And so, we start to forget our dreams, we start to ignore them. Life moves on and we get older, and then we let them go.” He wants his art to be a wake-up call to all who experience it. “I’m here to say: Follow your dreams!”

Rosen’s By the People installation, Walking on Clouds, is elegant in its simplicity. It consists of a series of mirrors each bearing enticing openings to sentences: “I am…” or “I could be…” or “I see…” Beneath these starters, nouns and adjectives flash by electronically at a blistering pace: “a flower,” “an asshole,” “sparkling,” “royalty,” hundreds more. When you snap a selfie with one of the mirrors, that flurry is replaced by a single, random phrase, which suddenly takes on great personal significance, having been singled out and immortalized alongside your own image thanks to the precise push of your thumb. “I am a firework.” “I see ghosts.” “I could be radiant.”

Rosen’s mission with this piece is to get people thinking about what is possible in their lives, to jar them out of complacency and link them spontaneously with a dream. He believes that in order for dreams to become reality they must first be articulated, and Walking on Clouds articulates dreams you may not even have realized you held. “If I’d never said I wanted to be an artist,” Rosen says, “this wouldn’t exist. We need to say it out loud for it to be true.”

Engage Urban Greening is a joyous call to action that exhorts participants to welcome nature into their lives. (Chris Ferenzi)

Where Walking on Clouds sets out to get you thinking about yourself and what you are capable of, Stevie Famulari and her By the People project Engage Urban Greening are all about the communities and natural wonders surrounding our individual selves.

At the heart of the exhibit is a field of colorful paper flowers sloping down a staircase, each fashioned from a special sort of construction paper that contains seeds and will eventually be planted and watered to yield wildflowers. Like the plant life it celebrates, Engage Urban Greening is itself ever growing as visitors to the gallery fashion their own origami creations and take them home to plant, water and raise.

Famulari, whose art first started to take on an environmental character as she completed her master’s in landscape architecture, sees the Engage project as a novel spin on the By the People theme of “marginalized communities.” To her, plant life in urban settings is the epitome of a marginalized community—one which deserves to be welcomed into neighborhoods.

Just as she believes we are all capable of making a positive impact on our environment, Famulari is also a passionate advocate of the idea that anyone can create art if they put in the effort. “Everybody’s style should not be judged as ‘better’ or ‘worse,’” she says. “Their art has value because it’s their perspective.”

See this art for yourself at the Arts and Industries Building before the June 23 conclusion of the By the People festival. The full rundown of By the People events and locations is available here. 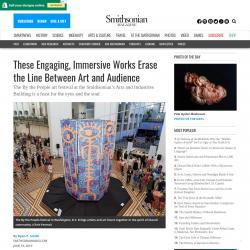