A fluffy pink fungus with long, thread-like tendrils encrusted in gold particles could help prospectors mine the precious element, a team of Australian researchers report in the journal Nature Communications.

As Mindy Weisberger explains for Live Science, the fungus—a strain of the species Fusarium oxysporum—relies on chemical interactions with underground minerals to collect gold from its surroundings. The organism then oxidizes gold before using yet another chemical to transform the dissolved element into tiny, nanoscale particles of solid gold. Gold particles produced by this process cling to the fungus, enabling spores to grow faster and larger than their non-gold covered counterparts.

The team suspects that gold also serves as a catalyst, helping the fungus digest certain carbon foods,as the study's lead author Tsing Bohu, a geo-microbiologist at Australia’s national science agency, CSIRO, explained in an interview with the Australian Broadcasting Company’s Anna Salleh. Moving forward, Bohu says the researchers hope to use the fungus, which was found in the gold fields of western Australia, as a tracker of sorts. If spores are present in a certain area, for instance, miners may be able to narrow down the locations in which they undertake exploratory drilling.

"Fungi are well-known for playing an essential role in the degradation and recycling of organic material, such as leaves and bark, as well as for the cycling of other metals, including aluminium, iron, manganese and calcium,” Bohu explains in a CSIRO press release. "But gold is so chemically inactive that this interaction is both unusual and surprising—it had to be seen to be believed."

According to Rebecca Le May of the Australian Associated Press, F. oxysporum appears to grow larger and spread faster than fungi not known to interact with gold, which means there could be a biological advantage to being covered in gold. Still, many details surrounding the singular fungus remain unclear; as Le May writes, Bohu plans on conducting additional analysis to better understand the organism’s relationship with gold and determine whether the fungus’ presence is indicative of a large underground deposit.

Australia is the world’s second largest gold producer, but predictions suggest the industry will soon be in trouble if new gold deposits are not found. In a press release, study co-author and CSIRO chief research scientist Ravi Anand notes that miners are already using exploratory techniques, including sampling termite mounds and gum leaves, to support the industry. It’s possible, he says, that the newly described fungus can be used in conjunction with these tools to “target prospective areas in a way that’s less impactful and more cost-effective than drilling.”

Overall, ABC’s Salleh reports, the fungus could help Australia’s gold mining industry in a number of ways: In addition to using the organism to detect gold in underground deposits, miners may be able to use it to recover gold from waste products such as sewage and manmade electronics.

Expanding on the science behind the fungus-gold interaction, Joel Brugger, a geochemist at Monash University who was not involved in the new study, tells Salleh thatF. oxysporum may act as a “lovely pathway,” transporting gold from the depths of the planet to more shallow, mineable soil. To accomplish this, the fungus oxidizes the element, making it lose electrons, grow more soluble, and, finally, move closer to the Earth’s surface.

Brugger concludes, “The fungus may be really critical in mobilising the gold.” 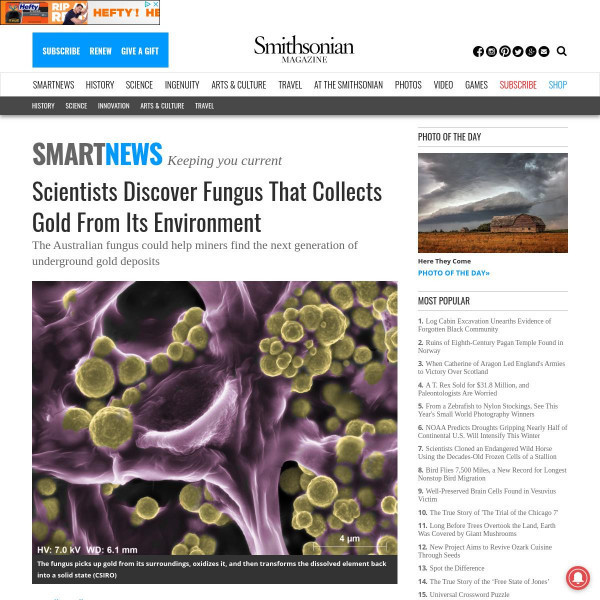