No, We Still Cannot Confirm the Identity of Jack the Ripper

After 130 years, do we finally know the identity of Jack the Ripper? Unfortunately, no. After releasing test results of a controversial silk shawl stained with blood and, possibly, semen, supposedly found at the scene of one of the Ripper killings, forensic scientists are pointing the finger at Aaron Kosminski, a 23-year-old Polish barber in London who was one of the first suspects identified by London police in the Ripper case. But like all elements in the Jack the Ripper saga, the evidence they’re offering is not able to close the book on the string of murders that terrorized the London streets of 1888.

The case for the barber’s unmasking is tied to the shawl alleged to have been found next to Catherine Eddowes, the Ripper’s fourth victim. As David Adam at Science reports, the cloth was acquired by Ripper enthusiast Russell Edwards in 2007, who had it DNA tested. While Edwards published the results in his 2014 book, Naming Jack the Ripper, he kept the DNA results and methods under wraps, making it impossible to assess or verify the claims of Kosminski as Ripper. Now, the biochemists who ran those tests, Jari Louhelainen of John Moores University in Liverpool and David Miller of the University of Leeds, have published the data in the Journal of Forensic Sciences.

There, the researchers explain they subjected the shawl to infrared imagery and spectrophotometry testing. They also inspected the stains using a microscope to determine what made them. Under ultraviolet light, they found that one stain was possibly produced by semen.

The researchers then vacuumed up what DNA fragments the could from the shawl, finding little modern contamination and many degraded short fragments, consistent with DNA of that age. They compared mitochondrial DNA in the sample, which is passed down from mother to child, to a descendent of Eddowes, finding that it was a match. The team also found a match to a descendant of Kosminski in other bits of mitochondrial DNA.

“All the data collected support the hypothesis that the shawl contains biological material from Catherine Eddowes and that the mtDNA sequences obtained from semen stains match the sequences of one of the main police suspects, Aaron Kosminski,” they write in the study.

But as Adam at Science reports, this more detailed data still doesn’t say enough. As Hansi Weissensteiner, a mitochondrial DNA expert, points out, mitochondrial DNA can’t be used to positively ID a suspect, it can only rule one out since thousands of other people could have had the same mitochondrial DNA. Additionally, experts have critiqued the way the results were published, as some of the data is shown as graphs instead of the actual results. Forensic scientist Walther Parson says the authors should publish the mitochondrial DNA sequences. “Otherwise the reader cannot judge the result,” Parson says.

Beyond the results, there’s an even bigger obstacle afoot—the provenance of the shawl. For The Conversation, Mick Reed explains the shawl’s origin story is full of problems. Was a shawl even picked up by Metropolitan Police officer Amos Simpson at the crime scene that night? Even if that were true, whether this scarf is the authentic one is up for debate; the cloth was previously dated to the Edwardian period, from 1901 to 1910, as well as to the early 1800s, and could come from anywhere in Europe.

Historian Hallie Rubenhold, author of the new book The Five: The Untold Lives of the Women Killed by Jack the Ripper, has been among the Ripper experts to criticize the conclusions. “[T]here is no historical evidence, no documentation that links this shawl at all to Kate Eddowes. This is history at its worst,” she wrote on Twitter in response to a headline that claimed the newly published research "proved" Jack the Ripper had been identified.

While it seems there's no way we'll ever know for certain who the murderer was, Rubenhold makes the case that it doesn't matter all that much. What she prioritizes are the identities of the women he murdered, whose names we have record of. As Meilan Solly recently reported for Smithsonian.com, Rubenhold’s research "dedicates little space to the man who killed her subjects and the gory manner in which he did so." Instead, it shifts the focus of the Jack the Ripper narrative to lives—not deaths—of his victims. 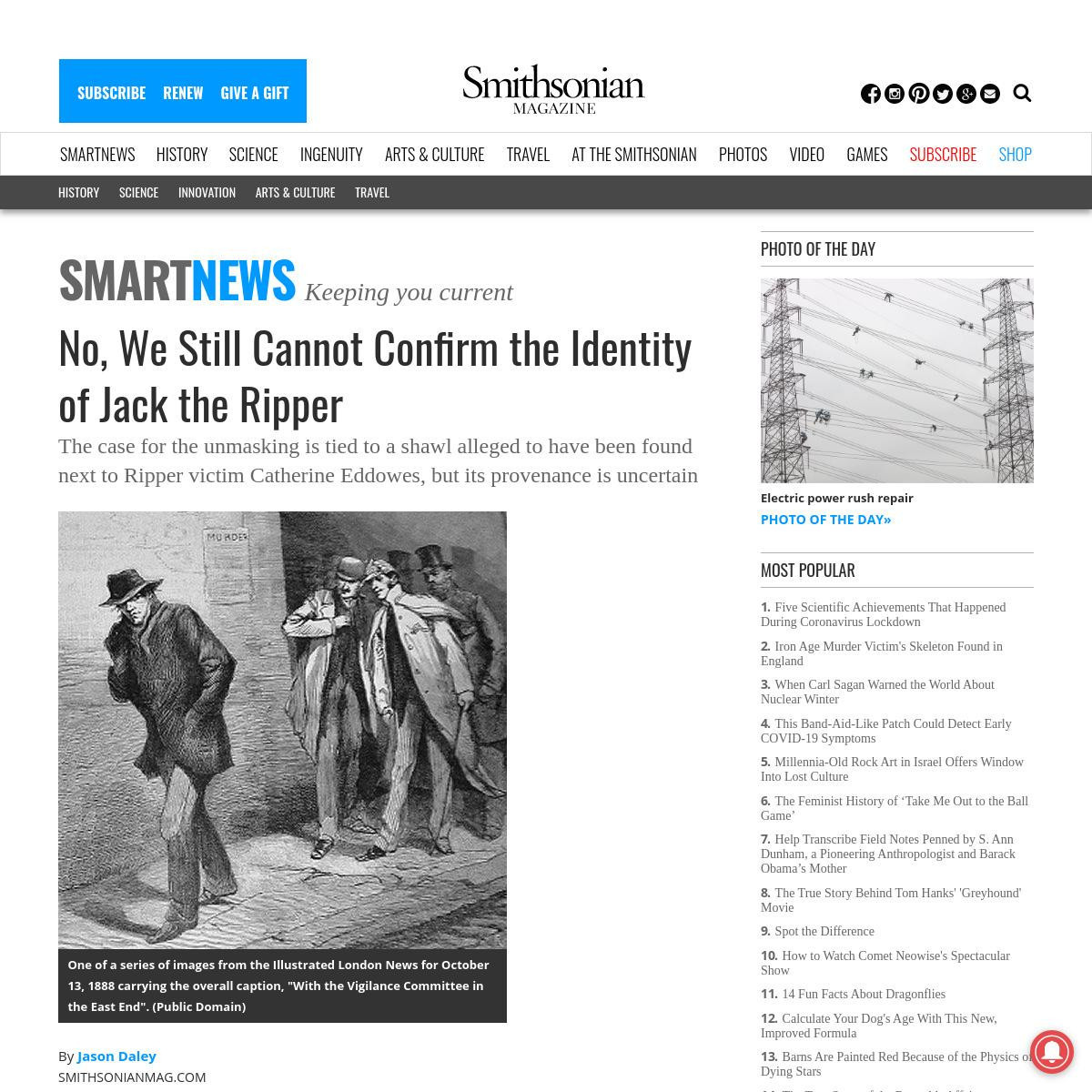