For thousands of years, humans have been usingSaccharomyces cerevisiae or brewer’s yeast to make beer. In turn the yeast, considered humanity’s first domesticated organism, has journeyed around the world, moving and mixing with other specimens. Fittingly, new research has found that beer is cross-cultural even on the microscopic level. As it turns out,S. cerevisiae has origins that span both Asia and Europe.

Researcher Justin Fay of the University of Rochester and his team set out to peer back into the history of brewer’s yeast by sequencing the genomes of four commercially available yeast strains (two ale, or top fermenting, varieties, one yeast strain that produces lager beer and one strain used in both beer brewing and baking) and comparing those genomes to yeast DNA sequenced from around the world. What they found is that modern beer yeast is combination of ancient yeast used to make European grape wine and yeasts used to produce rice wine in Asia. The findings appear in the journal PLoS Biology.

It’s likely the yeasts met somewhere on trade routes between Europe and Asia. “This finding points to the emergence of beer yeast from a historical East-West transfer of fermentation technology, similar to the transfer of domesticated plants and animals by way of the Silk Route,” a press release states.

Among the findings, the team spotted unusual variations in the genome not seen in other yeasts, suggesting the domesticated beer yeast got some traits from microbes that no longer exist. They also found the domesticated yeast strains used to make beer don’t all share the same genes, either, as Linh Anh Cat at Forbes points out. That means it’s likely that several types of yeasts hooked up along the Silk Road, producing various strains of yeast that became the basis for different beer styles. Or, as the team concludes, "modern beer strains are the product of a historical melting pot of fermentation technology.”

Finding exactly where the original S. cerevisiae came from as well as the other yeasts it has combined with over the centuries, remains a much harder mystery to crack. So far, no one has found a wild progenitor of brewer's yeast. But they have found some of its buddies. We’ve previously reported on evidence that suggests a yeast variety called S. eubayanus, which combined with S. cerevisiae to create lager beer yeast, may have originated in the beech forests of Patagonia. In 2017, residue in ancient brewing vessels boosted earlier 2011 research, revealing that people in the region may have been using it to make an alcoholic beverage over a thousand years ago, making the origins of modern beer even more global still. 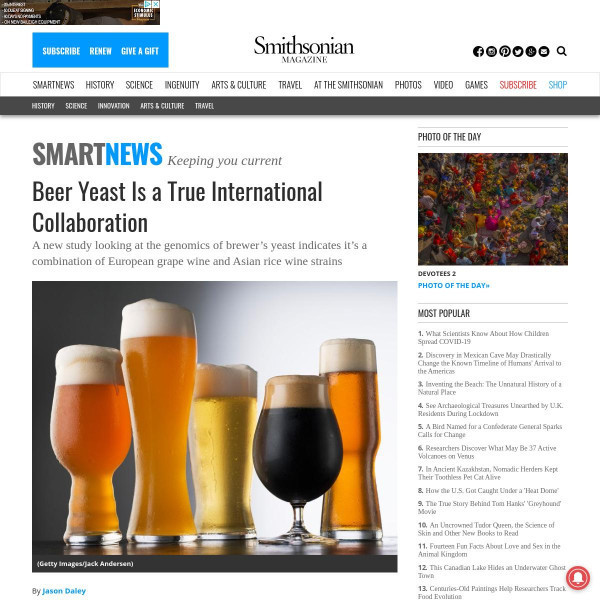