Serious critics tend to dismiss dog-related art for being too kitschy and sentimental. But the newly rebooted Museum of the Dog is not trying to go head to head with MoMA. Rather the museum, which just made its return to the American Kennel Club's headquarters in Manhattan after three decades in suburban St. Louis, is using its 200-item collection to put the dog/human and dog/art relationship in context.

Highlights of the Museum of the Dog, per Amanda Morris at NPR, include a 30-million-year-old dog fossil, a terracotta paw print found in a Roman archaeological dig, a Victorian-era cart for children pulled by dogs and an Edwardian dog house designed for a Chihuahua.

The museum also presents famous doggos throughout history, including Edward VII's wire fox terrier Caesar, who was part of the king’s 1910 funeral procession. Likenesses of U.S. presidents also made the cut: there are paintings of George H.W. Bush’s English springer spaniel Millie and George W. Bush’s Scottish terriers Barney and Miss Beazley. (The museum has long had the approval of former FLOTUS Barbara Bush, who praised the museum in in a 1990 letter, according to Jennifer Peltz reports for the Associated Press.)

Artist William Wegman’s well-known Weimaraner muses are also on view, as is a case dedicated to Smoky, a Yorkshire terrier who crawled through a pipe in Luzon during World War II to reestablish communication between American units and served as a therapy dog for the wounded in the Pacific. You can also pay your respects to the remains of Belgrave Joe, the Fox Terrier who more or less set the standard for the breed.

As an organization, the American Kennel Club sets the standard for dog breeds in the U.S., so it’s no wonder the crown jewel of its museum is a 42,000-volume library on dogs and specific breeds. The museum also includes a digital encyclopedia of dog breeds, a kiosk that matches people to dogs based on how they look and a gallery exploring dogs in popular culture.

Purebred dog breeding has undergone its share of criticism in recent years. In an interview with the AP, Alan Fausel, the executive director, says the museum hopes to put its work in context. “I think the best thing to take away is the fact that dogs were meant to have different jobs,” Fausel tells Peltz at the AP. “It’s learning why they were purposely bred for certain jobs, and their activities and their attributes.”

Bree Driscoll at NY1 reports that the museum originally opened in New York in 1982 as part of the American Kennel Club’s offices. But due to a lack of financial support and space the club decided to relocate the museum to Jarville House, a mansion in Queeny Park in West St. Louis in 1987, where the more remote spot had trouble attracting people.

Last year, the museum received just 10,000 visitors, reports Peltz at the AP. The American Kennel Club has more ambitious plans for its new doghouse at 101 Park Avenue, hoping to attract 80,000 to 100,000 visitors this year. However, with the exception of service animals, those museum-goers will all be two-legged: the museum does not allow dogs. 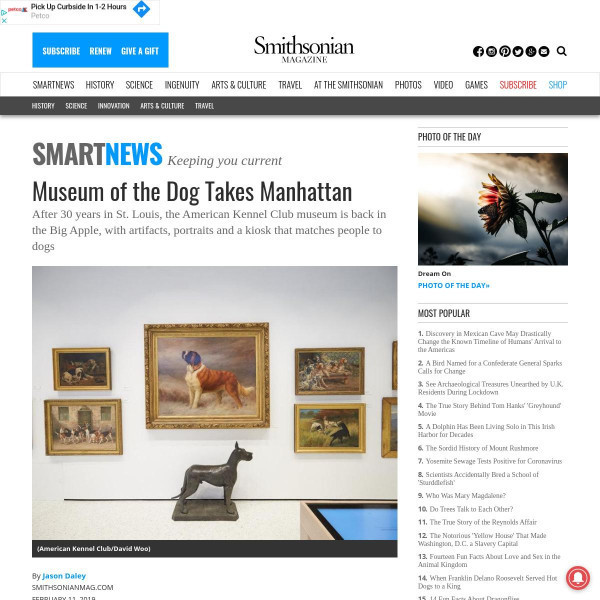