The southeast Asian jumping spider, or Toxeus magnus, is unusual in more ways than one. Not only does it bear a striking resemblance to a long-legged ant, but it also appears to be the only arachnid known to “milk” its young—an unprecedented behavior newly published in the journal Science.

In this case, “milk” is worth writing in quotation marks because the sugar-, fat- and protein-filled droplets produced by jumping spider mothers don’t technically meet the parameters of the word—containing lactose produced by mammary glands—as it’s used in relation to mammals. Still, Ben Guarino writes for The Washington Post, the fluid fulfills the basic purpose of milk: offering nourishment to offspring via what Sasha Dall, a University of Exeter biologist who was not involved in the research, describes as “some aspect of yourself.”

Lead author Zhanqi Chen of the Chinese Academy of Sciences launched the study after noticing the jumping spider’s odd communal tendencies. Most spiders are solitary creatures, The Atlantic’s Ed Yong notes, but T. magnus cluster in family groups, with young spiderlings staying in their mothers’ nests for an extended period of time.

To better understand this unusual behavior, Chen and his colleagues reared jumping spiders in the lab and tracked how long it took babies to leave the nest. Surprisingly, neither newborns nor mothers ventured beyond the nest in search of food for 20 days, leading the scientists to wonder how the vulnerable young arachnids managed to not only survive, but significantly grow in size.

Upon closer inspection, the team observed the mother transferring drops of a sustaining liquid (later revealed to contain four times the protein of cow’s milk) from her abdominal epigastric furrow to the nest during the first week post-birth. Once the one-week mark passed, spiderlings drank fluid directly from the mother’s body, crowding around in a manner eerily similar to suckling puppies.

According to The New York Times’ Douglas Quenqua, T. magnus moms even produced the milk-like fluid after their roughly 20-day-old offspring began leaving the nest to forage for food. Suckling only stopped when the babies reached 40 days old, at which point they gained a bit of independence but still returned to the nest for the night.

Interestingly enough, Jason G. Goldman reports for National Geographic, only females were permitted to continue nursing beyond sexual maturity. Males received the short end of the stick; Motherboard’s Becky Ferreira says the mothers actually attacked their adult sons and chased them out of the nest, perhaps to prevent inbreeding between brothers and sisters. Given their newfound ability to forage for food, this exclusion didn’t necessarily doom them to an early death.

The scientists ran through multiple scenarios to better assess the importance of jumping spider milk production, alternately blocking the mothers’ epigastric furrows by covering them with Wite-Out and preventing mothers from nursing beyond day 20.

Spiders that only received milk for the first 20 days of their lives—but still benefitted from the presence of a maternal figure beyond this point—emerged with fewer parasites than those who lost both milk and mothers at the 20-day mark.

Of 187 spiderlings spread out across 19 nests, those that enjoyed both maternal care and a consistent diet of milk exhibited a survival rate of 76 percent. Survival amongst those who lost their mothers after 20 days dropped to about 50 percent.

Jumping spiders are far from the only non-mammals known to produce a milk-like nutritious substance. As Ryan F. Mandelbaum explains for Gizmodo that cockroaches, pigeons, tsetse flies and earwigs have all been observed engaging in the mammalian practice. The key difference, according to The Post’s Guarino, is that mammals possess a specialized organ designed for lactation. So far, researchers have not identified an equivalent gland in non-mammals.

Chen tells The Atlantic’s Yong that he and his colleagues “have no idea” why the unusual practice evolved amongst jumping spiders specifically. He proposes, however, that the sustenance boost equips the tiny arachnids , which measure just a millimeter long, for life in a competitive, predator-filled environment.

Some scientists still have questions surrounding the discovery: Joshua Benoit of the University of Cincinnati was not involved in the study, but he tells Gizmodo that it’s unclear whether jumping spiders would return to their mothers beyond the 20-day mark in the wild. Nathan Morehouse, another Cincinnati scientist not involved in the study, adds that the new research doesn’t account for why the spiders nurse for so long or why other arachnid species don’t produce milk.

For now, these queries remain unanswered. But given the revelatory nature of the study, it’s likely that follow-up research will join the mix soon.

As Chen concludes in a statement, "We anticipate that our findings will encourage a reevaluation of the evolution of lactation and extended parental care and their occurrences across the animal kingdom." 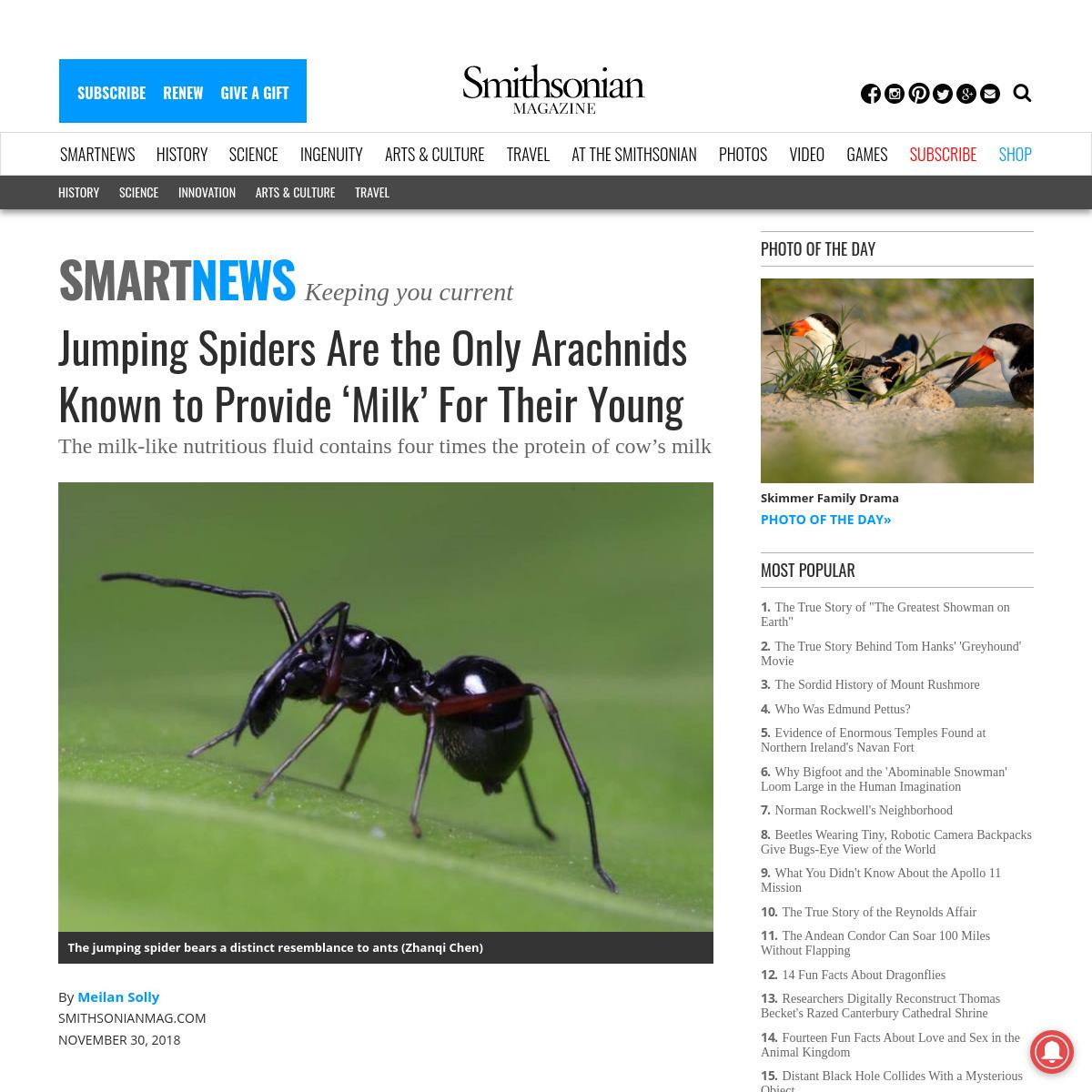