This is a complex brass instrument, consisting of a nocturnal, a sundial, a lunar aspectarium, and a geometrical quadrant. The maker, Caspar Vopel (1511-1561), taught mathematics in Cologne and studied cosmography. He made a number of armillary spheres and globes.

The nocturnal is used to find the time of night from observations of circumpolar stars. On a simple nocturnal, a pair of circular scales and an alidade are mounted together. The larger circle is divided into a monthly zodiac calendar to set the instrument to the proper date. The smaller circle is divided into 24 hours, eighteen of which are marked to be read by touch in the dark. The observer would sight the pole star through the center of the instrument and align the alidade with the "pointer" stars of Ursa Major. Simple nocturnals were one of the most commonplace mathematical instruments in the sixteenth and seventeenth centuries.

This compendium’s nocturnal and lunar aspectarium are on one side with the sundial in the design of fifteenth century astronomer Regiomontanus and the geometrical quadrant on the other. The nocturnal side has a zodiac calendar on the outermost ring of the base plate. The calendar scale is marked with the names of the months in Latin, divided to 10 and subdivided to 1 day numbered by 10. The zodiac scale has the names and engraved representations of the constellations, and each sign has a scale 0 to 30 degrees, divided to 10, subdivided to 1, numbered by 10. There are two moving volvelle plates, which are used to find the time of the rising and setting of the sun. The first has a pointer, marked "INDEX SOLIS" and with a sun symbol extending across the zodiac calendar carries scales for the time and the age of the moon. The time scale has hours 1 to 12 twice, divided to 1, subdivided to 15 minutes, numbered by 1 hour, and each hour position has a point for counting in the dark (except one 12, which has the index arm). Asterisks are engraved on the points for 6, the other 12, and 6. The lunar scale runs from 0 to 29|1/2|, divided to 1, subdivided to |1/4|, numbered by 1. The inner moving plate has an index, marked "INDEX LVNAE" and with a moon symbol, and is engraved with a diagram of planetary aspects marked "ASPECTVS PLANETARVM." It is pierced to reveal on the first moveable representations of lunar phases and parts of inscriptions. A long central index arm extends beyond the limit of the base plate; around the central pivot is engraved "STELLA POLARIS PER QUAM VISVS PROIEC." The arm is marked "INDEX HORALOGII" and ":PLAVST VRSAM" and "DVAE PARILES PLAVSTRI POSTREMAE A POLARI STELLA IN RECTAM DVCTAE SOLIS INDICE AD DIEM POSITO NOCTUR HORAM OST." The handle on this side is engraved "ASTROLABII DOPSVM HORALOGIIOVE NOCTVRNALIS. OMNIA CONANDO DOCILIS SOLLERTIA VICIT."

The sundial side has a Regiomontanus-type altitude dial with 2 pinhole sight vanes and a three-element articulated arm for adjusting the point of suspension of the plumb-line (the line and weight are missing) on the triangular grid of latitude and zodiacal position. The zodiacal symbols are at the top, with each sign divided by three; the latitude scale is from 5 to 60, divided to 5, 5 to 65 subdivided to 1, numbered by 5. The grid is marked on one side "ZODIACI LATITVDINVM" and on the other "ZODIACI LATITVDINVM QUAE ET POLI ELEVATIO TAM NOTII QVAM BOREI." The hour lines are numbered both 1 to 12 "HORAE ANTE MERIDIANAE" and 12 to 1 "HORAE POMERIDIANAE." There is a solar declination scale to the right of the hour lines, marked with zodiac symbols, this scale and the mid-day hour line being marked "GENERALIS ZODIACVS MERIDIANVS." The midnight line is marked "MEDIVM NOCTIS SEPTENTRIO." Around the edge of the sundial side are two altitude scales to be used with the sights and the suspension point set to a position marked "QVADRANTVM CENTRVM." The outer is a scale of degrees marked "QVADRANS ASTRONOMICVS UNIVERSALIS." The inner is a geometrical quadrant or shadow-square scale marked "QVADRANS GEOMETRICVS" and "VMBRA VERSA" and "VMBRA RECTA." 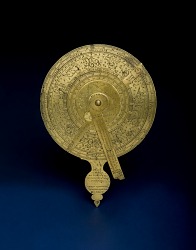 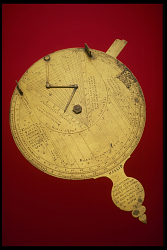 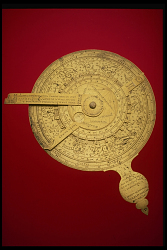 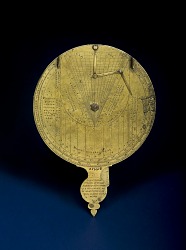 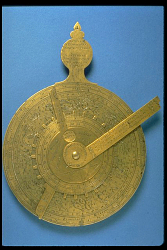 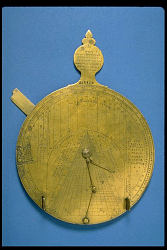