Birds Are Acting Erratically in Minnesota. Blame It on the Alcohol.

Something strange is happening to the birds of Gilbert, Minnesota. In recent days, they have been flying perilously close to windows and cars, and generally seem to be discombobulated. According to CBS affiliate WCCO 4, the cause of this erratic behavior is one that might be familiar to some humans: The birds are drunk.

Gilbert police, who have been fielding reports of close encounters with bumbling birds, took to Facebook to explain that the animals have been feasting on fermented berries, which in turn is making them “a little more ‘tipsy’ than normal.” An early frost this year sped up the fermentation process, police said. As James Owen explained in a 2014 piece for National Geographic, freezing prompts berries to convert starches into sugars, and when the berries subsequently thaw, “it [is] possible for yeast to get in” and expedite fermentation.

It’s not unusual for berries to turn boozy in late winter and early spring, but because the Minnesota frost occurred before birds in the area migrated south, their drunken antics have been particularly noticeable to Gilbert residents.

“Oh my!” a commenter exclaimed on the Facebook post. “That explains all the birds bouncing off my window lately!”

Species like robins, thrushes and waxwings, which tend to eat more berries than their other feathered friends, are most likely to get buzzed as they gorge themselves on alcoholic fruits while trying to bulk up for winter. Young birds may be particularly susceptible to drunkenness because their livers have not grown large enough to handle the unintentional imbibing.

“They just get sloppy and clumsy,” Matthew Dodder, a bird expert from California, tells Antonia Noori Farzan of the Washington Post. “They have actually fallen out of trees on occasion.”

In their statement, Gilbert police assure residents that there is “no need to contact law enforcement about these birds as they should sober up within a short period of time.” Police did note, however, that witnesses should be in touch if they see “Big bird operating a motor vehicle in an unsafe manner” or “Woodstock pushing Snoopy off the doghouse for no apparent reason.”

While the authorities are clearly having a giggle, there is reason to be concerned on the birds’ behalf. If they can’t fly properly or keep their balance, intoxicated birds are at risk of crashing into hard surfaces. In 2012, for instance, researchers performed necropsies on several flocks of cedar waxwings that had collided fatally with solid objects like windows and fences in California; they discovered that the unfortunate animals had stuffed themselves with overripe berries of the Brazilian Pepper Tree, and concluded that the birds’ deaths were the result of “flying under the influence of ethanol.”

Similar finds were made in 2011 in Cumbria, England, after the bodies of 12 common blackbirds appeared near a primary school. Police initially suspected, ahem, fowl play, but post-mortem examinations found berries in the birds’ gastrointestinal tracts and high alcohol levels in a liver sample, according to National Geographic’s Owen, suggesting that fermented fruits played a role in their deaths.

Putting decals on large reflective surfaces can help tipsy birdies avoid fatal crashes, according to the National Audubon Society, which also recommends that birds be left alone if they collide with windows and survive. If the bird may be in danger from cats or other predators, it’s best to pick it up gently with a towel and put it in a ventilated box in a dark and quiet spot. If the bird doesn’t recover within a few hours, the society says, call a local wildlife rehabilitation center.

Wildlife officials in the Yukon, Canada had their hands full several years ago, when Bohemian waxwings, drunk on fermented mountain ash berries, kept hitting windows and walls. The territory’s animal health unit would find them with juice-stained beaks, pop them into hamster cages (or “drunk tanks”), give them a few hours to sober up and then set them free.

As Dodder told The Post, “Sometimes, they just need a bit of time in a quiet setting to recover.”

Because as anyone recovering from a gnarly bender regrettably knows, time is often the only true remedy for a bad hangover—whether tequila or fermented berry-induced. 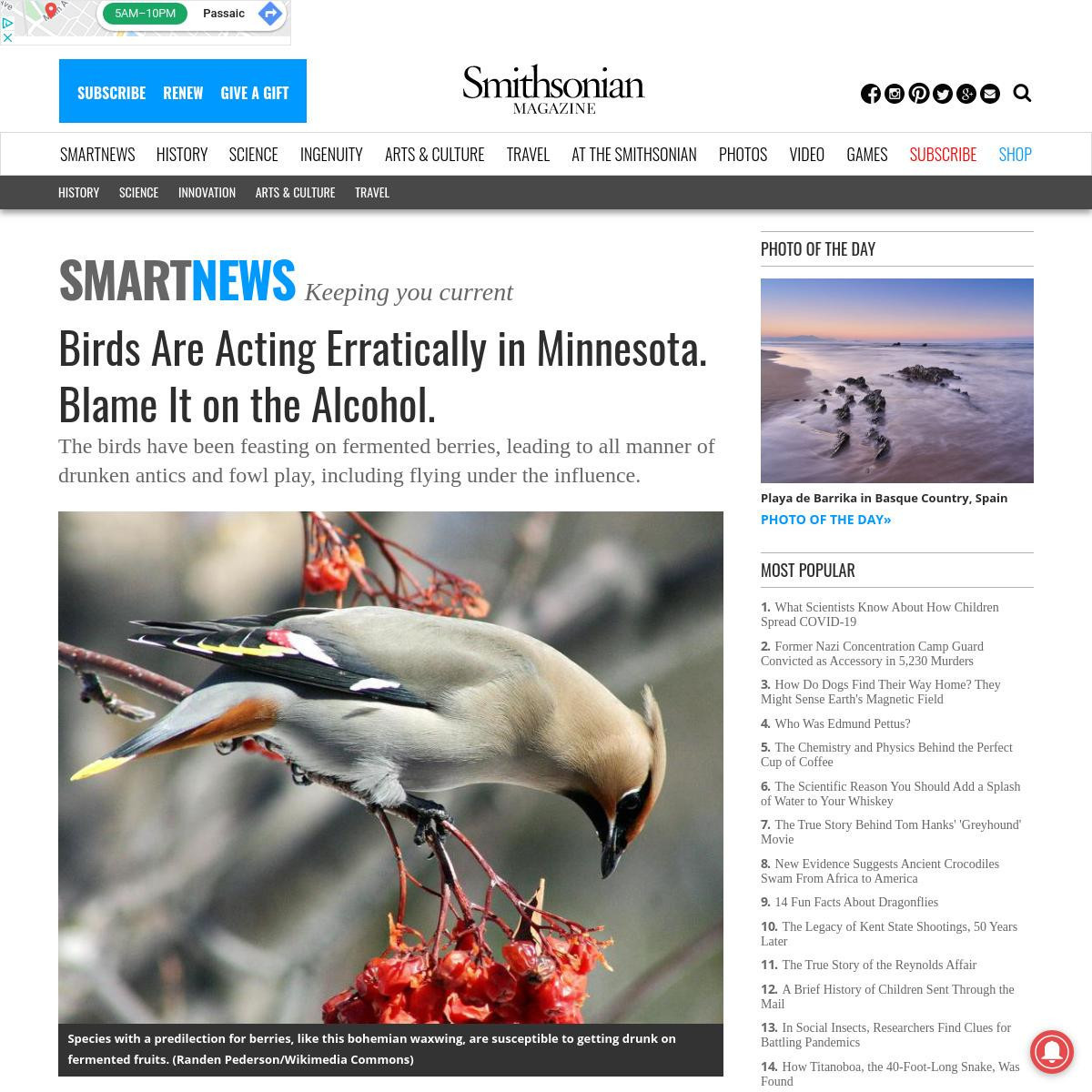