Coral reefs are facing many threats, including agricultural runoff, coastal development, overfishing and rising sea temperatures. But one threat has more or less flown under the radar: Some reefs lack enough bird poop. Ed Yong at The Atlantic reports that a new study in the journal Nature shows that reefs around islands where seabird populations are thriving—and defecating—clearly fare much better than those where bird populations have been wiped out.

The study was made possible by an accidental experiment. The Chagos Archipelago is an isolated group of 60 or so largely uninhabitated islands in the middle of the Indian Ocean. During the eighteenth and nineteenth centuries, sailors stopping in the area brought with them black rats, which colonized about two thirds of the islands, decimating seabird populations. The other islands are rat free and contain huge colonies of seabirds. In the 1960s, the few Chaggosians in the archipelago were relocated to make way for an American military base on Diego Garcia, the largest of the atolls. So for over 40 years, the rats have been allowed to roam free without human interference and the islands with birds have also been left to nature.

That’s why the Chagos are a perfect place to study the impact of rats—which have infested 90 percent of the globe’s island groups—on bird populations. The team examined six rat-infested islands and six rat-free islands, finding the ecological harm of the rodents extends into the soil and hundreds of feet out to sea, even impacting coral reefs.

The biggest difference, of course, is that the rat-free islands are full of birds—bird density was 760 times higher. “Islands with no rats are noisy, their skies are full of birds, and they absolutely stink of guano,” lead author Nick Graham from Lancaster University tells Yong. “But if you step foot on an island with rats, the skies are empty, it’s quiet, and it doesn’t smell. The difference is unbelievable.”

All those birds, incuding boobies, frigatebirds, noddies, shearwaters and terns, poop. Their guano adds the nutrient nitrogen to the islands, leading to big changes in the ecosystem. According to a press release, not only does that nitrogen make its way into the soil, plants and shrubs on the island, the team found it also leaches into the sea where it spurs the growth of algae and sponges. In fact, there were 50 percent more fish in the reefs around the birdy islands versus the ratty islands. Those fish contained more nitrogen and grew larger. And algae grazing, in which species like parrot fish nibble away algae and dead coral from the reefs stimulating new coral growth, happened 3.2 times as often around the birdy banks. “It was mind-boggling to see just how strong the differences are, across the board, for everything we looked at,” Graham tells Yong.

While the fact that rats have decimated entire ecosystems is sobering, it’s also good news in a way. While stopping pollution and climate change are monumental tasks, eradicating rats is low-hanging fruit—humans are pretty good at pest control and Yong reports rats have been eliminated from 580 islands globally so far, with projects getting even more ambitious. In fact, just last May, South Georgia Island near Antarctica, which has been plagued by rats for centuries, finished a $13 million, decade-long rat eradication, the largest ever conducted. It was officially declared rodent-free and its endangered native birds and other wildlife now have a fighting chance. New Zealand, home to tons of rare endemic species being gobbled up by rats, cats, weasels and other invasive species, is undertaking a monumental campaign to eradicate non-native mammals by 2050. Even the Chagos Islands themselves have seen some success. Last year, the Chagos Conservation Trust announced that rats had been exterminated from Ile Vache Marine, an important bird habitat.

The study shows that rat eradication projects are even more important than previously thought. “These results show how conservation can sometimes be a bloody business, where doing right by the ecosystem means there is a time to kill,” co-author Aaron MacNeil of Dalhousie University says in the press release. “For these invasive rats, that time is now."

Graham tells Victoria Gill at the BBC that rat eradication could also help mitigate the impacts of climate change, since healthier reefs are more resilient and can probably recover faster from warm-water bleaching events. And the Chagos need all the help they can get. A bleaching event in 2015 and 2016 damaged or killed 85 percent of the corals in the archipelago, which may never fully recover. 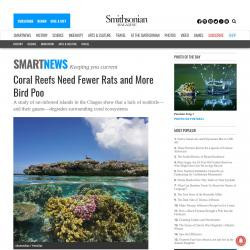