There are two main theories about how humans populated the New World after crossing Beringia, the wide flat land-bridge that once connected Russia’s far east with Alaska. The first, the ice-free corridor route, theorizes that 13,500 years ago early humans followed a gap between the ice sheets covering the top of North America down the Canadian Rockies. The second, the coastal migration route, which has gained steam in recent years, is that they followed the Pacific coast down to areas below the ice, reaching the interior of the continent thousands of years earlier. Now, reports Lizzie Wade at Science, a new study of the coast along Alaska shows that 17,000 years ago it was ice-free and brimming with plants and wildlife, adding more weight to coastal route theory.

In the last couple decades, new discoveries have put the ice-free corridor theory under scrutiny. Researchers have found several sites of human habitation south of the ice sheets that date well before the gap in the ice opened, including Monte Verde in far southern Chile which has been dated to between 14,500 and 18,500 years ago, and possibly might even go back 19,000 years. That would mean humans made it south of the ice thousands of years before the crack in the ice along the Rockies ever opened. The most likely alternate is a boat trip along the Pacific coast.

Geology PhD candidate Alia J. Lesnek of the University of Buffalo wanted to see if such a coastal trip along Alaska’s Pacific boarder was even possible. So in the summer of 2015 she undertook a study of rocks on four islands in the Alexander Archipelago in southeastern Alaska.

She and her team calculated the exposure age of the samples, they looked at concentration of beryllium-10 atoms, which allowed them to calculate how long the rocks had been exposed to sunlight since the ice sheets melted off. They found the ice would have retreated around 17,000 years ago. Lesnek and her colleagues also used the latest carbon dating techniques to analyze the bones of ringed seals discovered in caves in the area. Seal bones that were marked by predators dated back around 17,000 years as well, the team writes, which “suggests that robust terrestrial and marine ecosystems were established soon after deglaciation.” Their research appears in the journal Science Advances.

“Our study provides some of the first geologic evidence that a coastal migration route was available for early humans as they colonized the New World," Lesnek says in a press release, “There was a coastal route available, and the appearance of this newly ice-free terrain may have spurred early humans to migrate southward.”

Lesnek and her team are careful not to characterize their study as evidence that people used the coastal route to enter the Americas. But it does show that is possible. “We now know that the glaciers may have blocked the coastal route for a few thousand years. However, these glaciers retreated around 17,000 years ago, which opened the door for human migration along the coast,” she tells George Dvorsky at Gizmodo. “The timing of glacier retreat lines up very well with the genetic and archaeological evidence for the peopling of the Americas.”

Nicholas St. Fleur at The New York Times reports that the research only represents about 10 percent of the coastline the early migrants would have followed, and more research needs to be done to see if the rest of the coastal highway to the America’s was open.

This research comes as the ice-free corridor hypothesis continues to bear scrutiny. One study looking at sediment cores in the gap show that the corridor was desolate and not habitable by humans for hundreds of years after the ice receded, meaning it would have been very difficult for humans to make the trip between the ice cliffs. A 2016 study of bison DNA from the time period also shows that the corridor opened from the south to the north, meaning any human artifacts in the gap likely came from people moving up into the corridor, not into the interior of the continent. Then again, Wade reports that another recent study indicates the ice corridor was open 15,000 years ago, putting the whole timeline in flux.

Ben Potter, an anthropologist at the University of Alaska Fairbanks not involved in the study, tells Dvorsky that he finds the new paper’s conclusions “plausible” but adds that the peopling of the Americas is likely very complex and may have involved both the coastal route and the ice-free corridor route. In either case, he says much more study is needed, though Lesnak and her team have produced a good start. 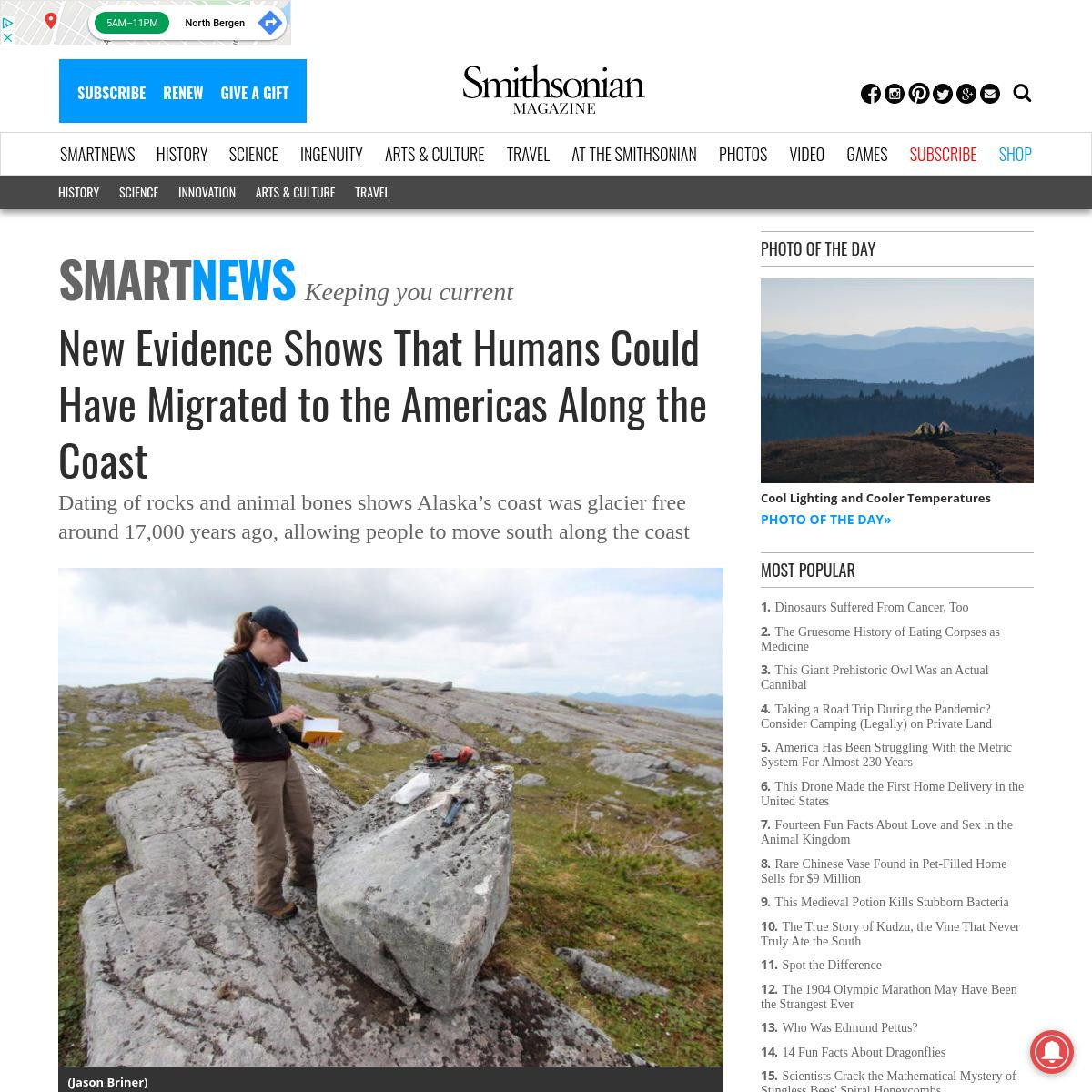