When fragments of China’s famed terracotta warriors were discovered by farmers in 1974, Zhao Kangmin was one of the first archaeologists on the scene. He painstakingly pieced the fragments together, spurring an excavation that would reveal thousands more clay soldiers packed into underground corridors.

As Mike Ives and Karoline Kan report for the New York Times, Zhao died on May 16 at the age of 81. The cause of death, according to his granddaughter, was a pulmonary infection.

The terracotta warriors were interred in the elaborate tomb of emperor Qin Shi Huang, who created the first unified Chinese empire in the 3rd century B.C. The clay army was intended to accompany the ruler into the afterlife. Today, the soldiers are among China’s most treasured artifacts; many can be seen in the Museum of the Terracotta Warriors and Horses, which was built around three major pits lined with clay soldiers.

A group of farmers unearthed the first signs of the relics more than four decades ago while digging a well in Shaanxi province. They contacted the authorities, who notified archaeologists in the region.

“Because we were so excited, we rode on our bicycles so fast it felt as if we were flying," Zhao, then a curator at a local museum, wrote in a 2014 article, according to Channel News Asia.

When he arrived at the site, Zhao discovered that villagers had taken some of the clay pieces home. He was nevertheless able to identify heads, torsos and limbs among the fragments, reports Sasha Ingber of NPR. The pieces were loaded into three trucks and taken to the museum where Zhao worked. He then began the laborious task of putting the fragments—some of them as small as a fingernail—back together.

The reconstructed warriors were life-sized, and rendered in remarkable detail; each boasted a unique hairstyle, outfit and expression. But Zhao did not want word of the incredible discovery to get out. It was the tail end of China’s Cultural Revolution, which sought to eradicate the “Four Olds”: traditional ideas, customs, culture and “habits of mind,” according to Encyclopedia Britannica. The movement resulted in the destruction of many archaeological sites and artifacts.

“[S]ome factions were still against restoring old things,” Zhao wrote in his essay, according to Channel News Asia. “So we decided to keep it a secret.”

A few months later, however, a journalist caught wind of the discovery. The resulting article attracted the attention of officials in Beijing, who ordered a large excavation. Archaeologists would subsequently unearth thousands of figures—among them infantrymen, officers, kneeling archers and clay chariots with horses—and identify nearly 600 sites associated with Qin Shi Huang’s grandiose tomb.

Zhao was not the first to dig up the treasured artifacts, but he would nevertheless come to refer to himself as the “first discoverer, restorer, appreciator, name-giver and excavator of the terra-cotta warriors.”

In 2003, three of the farmers who found the terracotta warrior fragments tried to obtain an official certificate from the Museum of the Terracotta Warriors and Horses identifying them as the discoverers of the precious relics, report Ives and Kan of the Times. Their efforts were not successful.

“The farmers saw the terracotta fragments, but they didn't know they were cultural relics, and they even broke them,” Zhao said in a 2009 interview with China Daily. “It was me who stopped the damage, collected the fragments and reconstructed the first terracotta warrior.”

In his old age, Zhao remained immensely proud of his role in the discovery. The China Daily article reported that even after Zhao retired from his post as a curator at the Lintong Museum in Xi’an, he would visit the museum every day to sit beside four terracotta warriors that he reconstructed as a younger man. 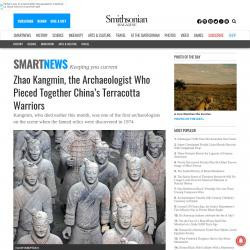