Sitting on his porch in 1928, under the Alabama sun, snacking on peaches, Cudjo Lewis (born Oluale Kossola) recounted to his guest his life story: how he came from a place in West Africa, then traversed the Middle Passage in cruel and inhumane conditions on the famed Clotilda ship, and saw the founding of the freedman community of Africatown after five years of enslavement. After two months of listening to Kossola’s tales, his interlocutor asked to take his picture. Donning his best suit, but slipping off his shoes, Kossola told her, “I want to look lak I in Affica, cause dat where I want to be.”

His listener, companion and scribe was Zora Neale Hurston, the celebrated Harlem Renaissance author of Their Eyes Were Watching God. She poured his story, told mostly in his voice and dialect, into Barracoon: The Story of the Last “Black Cargo.” After eight decades, the manuscript is finally being published next week. (The title comes from the Spanish word for an enclosure where slaves were kept before the Middle Passage journey.)

Known mostly as a novelist, Hurston also had a career as an anthropologist. She studied under the well-known Franz Boas, who helped establish Columbia University’s anthropology department, in the 1890s, and she conducted fieldwork on voodoo in Haiti and Jamaica and folktales in the American South.

Under Boas’ guidance, Hurston was part of a school of anthropological thought that was “concerned with debunking scientific racism that many anthropologists had been involved in constructing in late-19th century and in the early years of the 20th century,” explains Deborah Thomas, a professor at University of Pennsylvania and one of the organizers of a 2016 conference on Hurston’s work. “What made anthropology attractive to her was that it was a science through which she could investigate the norms of her own community and put them in relation to broader norms.”

By the time Kossola was brought to the U.S., the slave trade, though not slavery, had been outlawed in the country for some 50 years. In 1860, Alabama slaveholder Timothy Meaher chartered the Clotilda, betting—correctly—that they wouldn’t be caught or tried for breaking the law. The ship’s captain, William Foster, brought 110 West Africans to Mobile, Alabama, where he and Meaher sold some and personally enslaved the rest. To hide evidence of the trafficking, Foster burned the Clotilda, the remains of which have yet to be found. Still, “press accounts and the kidnappers' willingness to share their 'escapade' meant that the story of the Clotilda was fairly well documented in the late 19th/early 20th century,” explains Hannah Durkin, a scholar of American Studies at Newcastle University.

Almost 90 years old in 1928 when he was interviewed for Barracoon, Kossola was believed to have been the last survivor of the last slave ship. As she explained in her introduction, he is “the only man on earth who has in his heart the memory of his African home; the horrors of a slave raid; the barracoon; the Lenten tones of slavery; and who has sixty-seven years of freedom in a foreign land behind him.”

When Hurston recorded Kossola’s life for Barracoon, it was not the first time she had met him. Nor was Hurston the only or first researcher to interview Kossola. Her peer Arthur Huff Fauset had in 1925, as had writer Emma Roche a decade before that. In 1927, Boas and Carter G. Woodson sent Hurston to gather Kossola’s story, which was used for an article she published in the Journal of Negro History. Scholars have since discovered Hurston plagiarized significantly from Roche’s interviews and speculated about Hurston’s transgression, citing her frustration with her lacking material. Despite some of Hurston’s sloppy citations and some paraphrasing, the editor of the newly released book, Debora G. Plant, explains in the afterword that there is no evidence of plagiarism in Barracoon.

Unlike other well-known slave narratives, which often include escape or bids for self-purchase, or speak to the abolition struggle, Barracoon stands alone. “His narrative does not recount a journey forward into the American Dream,” writes Plant. “It is a kind of slave narrative in reverse, journeying backwards to barracoons, betrayal, and barbarity. And then even further back, to a period of tranquility, a time of freedom, and a sense of belonging.”

Hurston’s approach to telling Kossola’s story was to totally immerse herself in his life, whether that meant helping him clean the church where he was a sexton, driving him down to the bay so he could get crabs, or bringing him summertime fruit. She built up trust with her subject starting with the basics: his name. When Hurston arrives at his home, Kossola tears up after she uses his given name: “Oh Lor’, I know it you call my name. Nobody don’t callee me my name from cross de water but you. You always callee me Kossula, jus’ lak I in de Affica soil!” (Hurston chose to use of Kossola’s vernacular throughout the book, “a vital and authenticating feature of the narrative,” writes Plant.)

With Kossola guiding the way through his story, Hurston transcribed tales of his childhood in Dahomey (now Benin), his capture at 19, his time in a barracoon, his dehumanizing arrival, and five years of enslavement in Alabama. After emancipation, Kossola and his fellow Clotilda survivors established the community of Africatown when their return home was denied to them. Hurston chronicles his attempt to maintain a family whose members were taken from him one by one, through natural causes or violence. He tells her through tears, “Cudjo feel so lonely, he can’t help he cry sometime.”

Hurston’s perspective comes in and out of the narrative only occasionally. She uses it to set the scene for her readers and to give fuller context to the experience, as when, after her subject recounts a certain memory, he is transported. She writes, “Kossula was no longer on the porch with me. He was squatting about that fire in Dahomey. His face was twitching in abysmal pain. It was a horror mask. He had forgotten that I was there. He was thinking aloud and gazing into the dead faces in the smoke.”

Hurston “eschew[ed] a questionnaire-based interview approach,” says Durkin. Hurston was patient with her subject, on days he didn’t want to talk, she didn’t press. But she was also determined, returning to his house repeatedly to get the full story.

As Kossola tells Hurston, he shared his life with her out of a desire to be known and remembered: “Thankee Jesus! Somebody come ast about Cudjo! I want tellee somebody who I is, so maybe dey go in de Afficky soil some day and callee my name and somebody dere say, ‘Yeah, I know Kossula.’”

The process was not without its complications: As Durkin points out, Hurston’s Barracoon reporting was paid for by Charlotte Osgood Mason, a white patron of Harlem Renaissance artists. Its funding, Durkin argues, “implicated it in a history of voyeurism and cultural appropriation.” Hurston was “employed effectively as white woman’s eyes” and Mason saw her “as a collector, not an interpreter,” of the culture. Conflict between Hurston and Mason over ownership of stories, the writer’s need for funding and her desire to please her patron all complicated the anthropological work. Despite the conditions of this reporting, the manuscript is, as Durkin told me, “the most detailed account of his experiences” and “Hurston corrects some of the racist biases of earlier accounts.”

Completed in 1931, Hurston’s manuscript was never published. Viking Press expressed some interest in her proposal but demanded she change Kossola’s dialect to language, which she refused to do. Between the Great Depression’s quashing effect on the market, this early rejection, tensions with her patron, and Hurston’s interest in other projects, Barracoon was never exposed to a broad audience. In an echo of her work with Kossola, Hurston’s own life story was buried for a time, and the writer risked slipping into obscurity. In the late 1970s, writer Alice Walker spearheaded a rereading of Hurston’s work, which brought her books much deserved attention. Still dedicated to upholding and recognizing Hurston’s legacy, Walker wrote the foreword to the new book.

A man who lived across one century and two continents, Kossola’s life was marked, repeatedly and relentlessly, by loss: of his homeland, of his humanity, of his given name, of his family. For decades, his full story, from his perspective and in his voice, was also lost, but with the publication of Barracoon, it is rightfully restored. 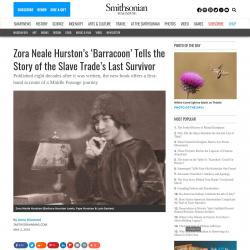