How the Death of 6,000 Sheep Spurred the American Debate on Chemical Weapons

The morning of March 14, 1968, began just like any other day in the rural, snow-covered hills of Skull Valley, Utah. But for Tooele County Sheriff Fay Gillette, the carnage of the day would be forever seared in his mind, and for the rest of the country, it would come to be a flashpoint for a national debate about the use of chemical weapons.

“I’ve never seen such a sight in my life,” Gillette later told investigative reporter Seymour Hersh about the thousands of dead livestock splayed across the landscape. “It was like a movie version of ‘death and destruction’—you know, like after the bomb goes off. Sheep laying all over. All of them down—patches of white as far as you could see.”

Had all those sheep eaten a poisonous plant? Had they come into contact with foliage sprayed with pesticides? Or maybe there was an even more alarming culprit: the Dugway Proving Ground, the Army’s largest base for chemical and biological weapons testing, located only 80 miles from Salt Lake City and a mere 27 miles from the stricken animals.

As more sheep sickened and died, spokespeople for the Dugway facility denied testing any weapons in the days before the die-off. But on March 21, U.S. Senator Frank Moss, a Democrat representing Utah, released a Pentagon document that proved otherwise: On March 13, the day before Sherriff Gilette came across the macabre scene, a high-speed jet had sprayed 320 gallons of nerve gas VX across the Dugway grounds in a weapons test. The odorless, tasteless chemical is so deadly that less than 10 milligrams is enough to kill a human by asphyxiation, via paralysis of the respiratory muscles.

In the weeks and months tha followed, local veterinarians and health officials investigated the matter. Their findings: the jet that sprayed VX gas had experienced a malfunction in its delivery tanks and had accidentally released the gas at a much higher altitude than intended, allowing it to be blown far from the testing grounds. The ill-fated sheep had been grazing on grass covered in the chemical. Some died within 24 hours while others remained ill for weeks before succumbing, “generally act[ing] dazed, [with] their heads tilted down and off to the side, walk[ing] in a stilted, uncoordinated manner,” reported Philip Boffey for the journal Science. It was exactly the suite of symptoms scientists would expect to accompany poisoning by VX nerve gas.

But the most damning report came from the National Communicable Disease Center in Atlanta, which tested the water and forage food from the area, as well as the blood and livers of dead sheep. Their tests “prove beyond doubt that these responses are in fact identical and can only be attributed to the same chemical” as the Army provided for comparison, stated the report.

Despite the widespread coverage of the incident, locally and nationally, few people in the region expressed real alarm in the immediate aftermath. This was in part due to the fact that the military was the largest employer in the state. “Concern, from the highest level of state officialdom on down, was that too much investigating or talking about the incident might make the Army move its base from Dugway,” reported Seymour Hersh.

Although the Army never released a full, detailed report, they paid $376,685 to rancher Alvin Hatch, whose sheep accounted for 90 percent of those afflicted. The military also lent bulldozers for the mass burial of the dead sheep, and initiated a review of the safety protocol at Dugway.

But even with the sheep buried and settlements paid, the Army couldn’t make the incident disappear: the deaths of the sheep was only the starting point of what became a years-long battle over chemical weapons in the context of the Cold War and American military action in Vietnam. It’s all because Richard McCarthy, a Democratic congressman from New York, happened to see an NBC documentary about the incident in February 1969.

“Chemical and biological weapons were another side of the nuclear arms race, but they were a much more secret and hidden aspect of it,” says science historian Roger Eardley-Pryor. “They were much less known until Richard McCarthy made this a national issue.”

Before that point, chemical weapons were largely believed to be banned from use by international agreement. After World War I, in which every major power deployed chemical weapons—resulting in 1 million casualties and more than 90,000 deaths—Western nations signed the 1925 Geneva Protocol. The agreement prohibited the use of chemical and biological weapons, and for a time it seemed as if it would be obeyed.

But the United States never signed the agreement. Between 1961 and 1969 alone, the U.S. military spent $2 billion on its chemical weapons stockpile, writes science historian Simone Müller in Historical Social Research. Over that same period, the military dumped hundreds of thousands of tons of old chemical weapons directly into the ocean, without bothering to keep records of precisely where or how many weapons were disposed of. The military also discovered multiple instances of chemicals leaking out of their containers, including 21,000 leaky bomb clusters discovered in the Rocky Mountain Arsenal in Denver.

Yet the American public was almost entirely unaware of any of the stockpiles, or the danger of testing, storing and transporting them. The only synthetic chemicals being discussed in the public sphere, Eardley-Pryor says, were pesticides harmful to the environment like DDT (Rachel Carson’s landmark research on the topic, Silent Spring, was published in 1962) and so-called “nonlethal” chemicals used in Vietnam, like the defoliating herbicide Agent Orange, and tear gas. (The defoliant would later be discovered to be carcinogenic, resulting in a multitude of health problems for Vietnam veterans and residents of the country.)

After McCarthy saw the NBC piece on the Dugway sheep kill, he was determined to learn more—and expose the chemical weapons complex to the rest of America. Beginning in May 1969, McCarthy instigated congressional hearings that revealed the extent of the U.S. chemical weapons program and uncovered a disposal program with a distasteful acronym: CHASE. It stood for the method by which toxic waste, moved onto ships and sent to sea, were disposed of: Cut Holes And Sink ’Em.

A little more than a year after the Dugway incident, in July of 1969, a small leak developed in a nerve gas weapon on the U.S. military base on Okinawa; 24 people were injured, though none fatally. The press and the public quickly drew a line between Okinawa and the Utah sheep. More incidents came to light. “The Pentagon admitted that, besides Dugway Proving Ground in Utah… Edgewood Arsenal, Md. and Fort McClellan, Ala., have also been the sites of open-air testing of Tabun, Sarin, Soman, VX and mustard gas,” reported Science.

Military officials argued that tear gas, at least, had an important place in the Vietnam War: it could protect U.S. soldiers by flushing Viet Cong soldiers out of hiding without killing innocent Vietnamese citizens. But after years of growing steadily more unpopular, even the argument for the humane use of tear gas in Vietnam lost its power. In 1975, Congress approved the protocol and President Gerald Ford ratified it. The U.S. would no longer use chemical weapons—lethal or nonlethal—in warfare. Ironically, tear gas has continued to be used as a weapon of pacification domestically; law enforcement from local police officers to the National Guard have continued to use tear gas to quell riots and prevent property damage.

But chemical weapons, which scientists of the 1960s and 70s described as emerging from Pandora’s box, continue to haunt us. From their deadly use by dictator Bashar al-Assad on his own people in Syria, to Russia’s apparent use of a nerve agent on former intelligence officials in the U.K., it’s clear that the use and legacy of synthetic chemicals is far from over.

While there is no definitive solution to preventing the use and spread of such weapons, Eardley-Pryor does add that it’s rare for countries to actually use them. “I’m very thankful, if surprised, that other nations have agreed to say this is a terrible thing, we’re not going to use it,” he says.

And in the U.S., at least, we may have the sheep to thank for it. 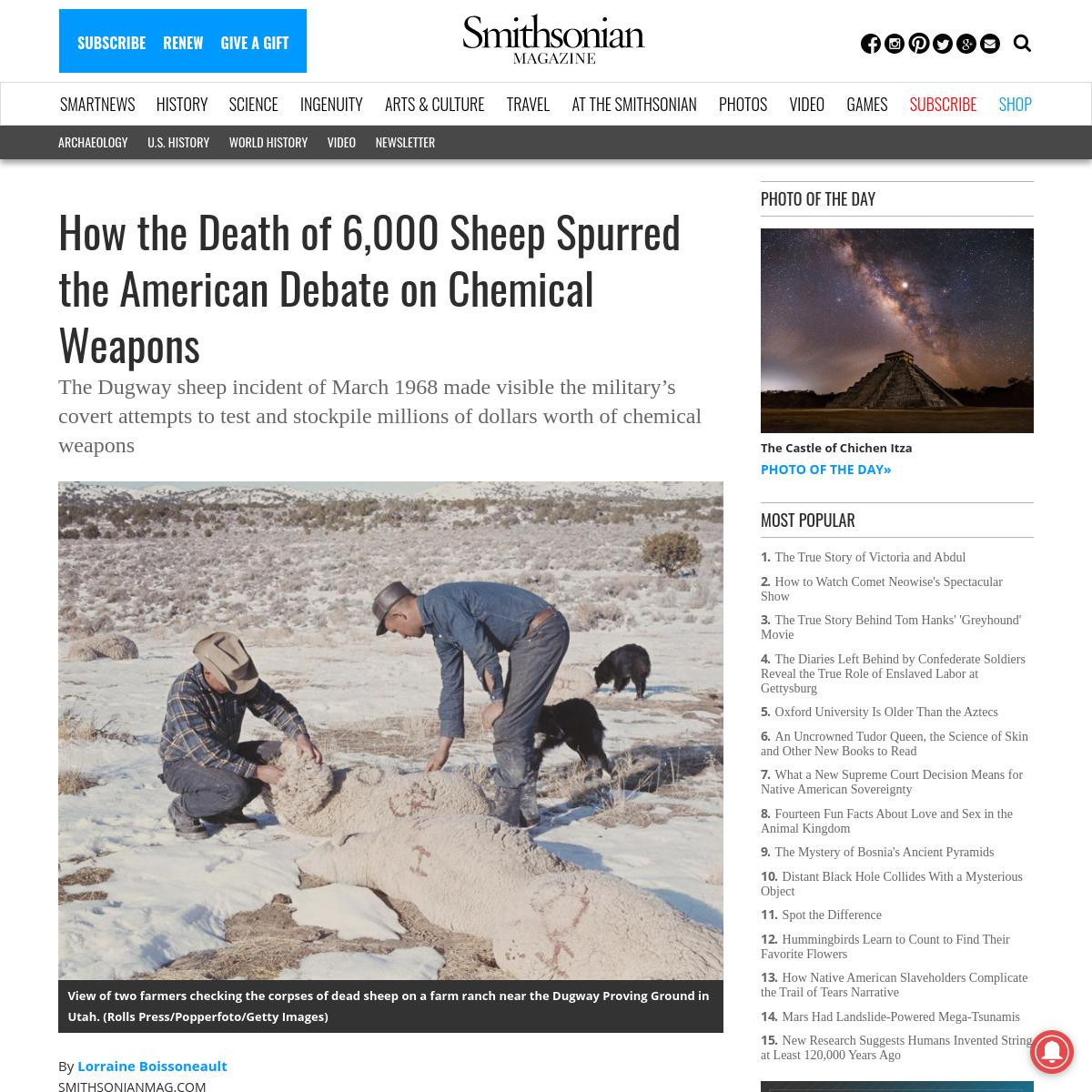