The Real Science Behind Your Favorite Nerd Culture at Awesome Con

They came for the vintage video game arcade, the sprawling art fair, and rare photo ops with their favorite celebrities. But they also came to learn.

Since its 2013 launch, the annual Washington, D.C. pop culture fest known as Awesome Con has blossomed into a national beacon of proud nerddom. Last weekend, some 60,000 enthusiasts from around the country descended on the Walter E. Washington Convention Center for a three-day celebration of all things nerd and culture. Brandishing homemade lightsabers and Tardises, and donning costumes inspired by franchises as diverse as Teen Titans, Spirited Away and The Last of Us, these dedicated fans had no trouble repping their sometimes-obscure passions.

But within Awesome Con is a series of lectures and panels that skew even more geeky than the rest of the conference: an educational series called Future Con that ties real-world concepts and cutting-edge scientific research in with the fiction. Run jointly by Awesome Con and Smithsonian Magazine, this series enlists NASA astrophysicists, university biologists and entertainment industry engineers to bring scientific expertise to bear on an assortment of intellectual properties ranging from Black Panther to Mass Effect.

Kicking off the lineup of Future Con presentations was a panel talk from NASA, held Friday afternoon, titled “NASA Science at Earth’s Extremes.” Experts delved into a selection of NASA’s current Earth science campaigns, showing the audience that NASA doesn’t just look outward to the stars—but also inward toward Earth.

Following presentations from glaciologist Kelly Brunt on Antarctic sledding expeditions and geologist Jacob Richardson on volcano recon in Hawaii and Iceland, environmental scientist Lola Fatoyinbo spoke on the carbon-rich equatorial mangrove ecosystems of Central Africa, and the importance of wedding on-the-ground fieldwork with observations from planes and orbiters. NASA is preparing to launch a pioneering mission called the Global Ecosystem Dynamics Investigation (GEDI—pronounced “Jedi,” of course) that will survey the verticality and dynamism of terrestrial forests with a LIDAR-equipped satellite. “May the forest be with you,” she concluded with a smile.

Soon after this panel came a live recording of Smithsonian’s AirSpace podcast, in which personnel from the Air and Space museum talked space stations with special guest René Auberjonois of Star Trek: Deep Space Nine, who felt the show accurately captured what living on a space station “would do to you at a psychological level.”

Air and Space Museum researcher Emily Martin posited that space stations are likely to play an increasingly large role as we push humanity beyond Earth. “We’re going to need to have these sorts of bus stops” for our astronauts, she said. Equipped with modern tech, she thinks modern spacefarers could make discoveries their forebears could only dream of. “Could you imagine an Apollo astronaut with a smartphone? Think of what they could do!”

A Future Con panel discusses the science and social dynamics at play beneath the surface of Black Panther. (Lacey Gilleran)

Building on this theme of space exploration was a discussion on the mysteries of black holes, and one in particular located deep within our own galaxy. “There’s a four-million-solar-mass black hole sitting right in the middle of the Milky Way,” said NASA astronomer Jane Turner. She estimates that it sucks up the equivalent of an entire star each Earth year. A global alliance of scientists is on the verge of observing this black hole with an array of earthbound telescopes in an exciting an unprecedented project called the Event Horizon Telescope.

After this deep dive into the unknown, Future Con turned back toward the familiar and fun, putting on a widely attended panel talk on the science depicted in Marvel’s critically acclaimed blockbuster Black Panther. Panelists discussed the empowering message of Afrofuturism as well as particular real-life analogs to some of the wondrous “vibranium” technologies seen onscreen.

Lockheed Martin engineer Lynnette Drake argued that “graphene is very similar to vibranium in terms of what we use in the science world,” and her colleague Charles Johnson-Bey pointed out that absorptive nanofibers—like those in protagonist T’Challa’s panther suit—have a firm basis in reality. “We have nanomaterials we use to make materials lighter,” Johnson-Bey said. Some of them are even employed to diffuse lightning strikes on moving watercraft, in much the same way T’Challa’s armor absorbs and protects him from incoming energy.

Duke biology professor Eric Spana walked a rapt crowd of Potterheads through the workings of heredity in Rowling’s books, concluding via a thorough analysis of salient—but fictional—case studies that sensitivity to magic must be an autosomal dominant trait. Where do Muggle-born witches and wizards come from, then? Spana had an answer for that too: thanks to spontaneously occurring germline mutations, he showed that it is perfectly reasonable to expect a teensy percentage of Muggle-born yet magic-sensitive kids to arise in any given population.

Spana puts the odds of being born magic-sensitive to Muggle parents at one in 740,000: “Powerball odds.” In other words, don’t hold your breath.

Later in the afternoon, two of the designers who brought to life the widely adored Star Wars droid BB-8 talked about their prototyping process. Star Wars electronics engineer Matt Denton, who had started out in laboratory robotics but decided academia wasn’t for him, revealed that a host of BB-8 models were ultimately made for the screen, each with their own strengths and weaknesses. These included trike-mounted models, a lightweight model, a puppet model (for up-close emotional moments) and even a stunt model. The so-called “red carpet model,” a fully automotive droid that Denton’s coworker Josh Lee called “a whole new type of BB-8,” rolled out onstage to surprise and delight the fans.

Next were two thoughtful panels on increasing diversity in science and pop culture. In “Brave New Girls,” female scientists, science educators and science communicators discussed their experiences in the world of professional science, recounting stories of inspiration, hurdles overcome and successes achieved. Later, a second panel looked at trends in STEAM and diversity in comics and movies, stressing the importance of onscreen representation and the transformative effect of seeing someone who looks like you pursue dreams akin to yours.

Panelist Renetta Tull said that “Seeing Lieutenant Uhura in Star Trek was a big deal for me” as an African-American scientist and educator at UMBC. Some of her first major work in academia, on 3D imaging techniques, was inspired by the holodeck technology built into the Enterprise.

One of the most powerful sessions of the day was a screening of Stephen Hawking’s final film, Leaving Earth: Or How to Colonize a Planet. In the film, the legendary astrophysicist—who passed away this March—suggests that it’s time to start thinking seriously about a means of escaping Earth. “We can and must use our curiosity to look to the stars” for refuge, he says—Earth could be wiped out in any number of ways in the relatively near future.

The nearest potentially suitable destination for humankind is a planet slightly larger than ours orbiting the red dwarf Proxima Centauri. In order to reach this world, called Proxima B, we’d need to traverse an intimidating 4.2 light years of space. The solution, perhaps, will rely on the principle of solar sails. In time, a massive array of earthbound laser stations could fire simultaneously at a sail-equipped spacecraft, sending it hurtling into the black at a significant fraction of light speed. To protect voyagers from cosmic rays en route, biologists believe we might need to put them in a state of bear-like hibernation. Strangely enough, bears are effectively immune to radiation damage for the duration of their winter snooze.

The convention came to a close on Sunday, with a last smattering of Future Con topics addressing science in video games (Mass Effect got high marks for planetary dynamics, while Assassin’s Creed was chided for sketchy epigenetics), the many incarnations of the Batmobile (the panelists’ favorite was the 1989 model from Burton’s Batman, now on view at the National Museum of American History), and heady explorations of the deep universe and gravitational waves. Then, armed with heady visions of the future and a little more knowledge about the world around them, Awesome Con attendees compressed their lightsabers, bagged their d20s, and filed out into the cool March evening.

This event was made possible by Future Con sponsors Boeing, Netflix, and X, the moonshot company. 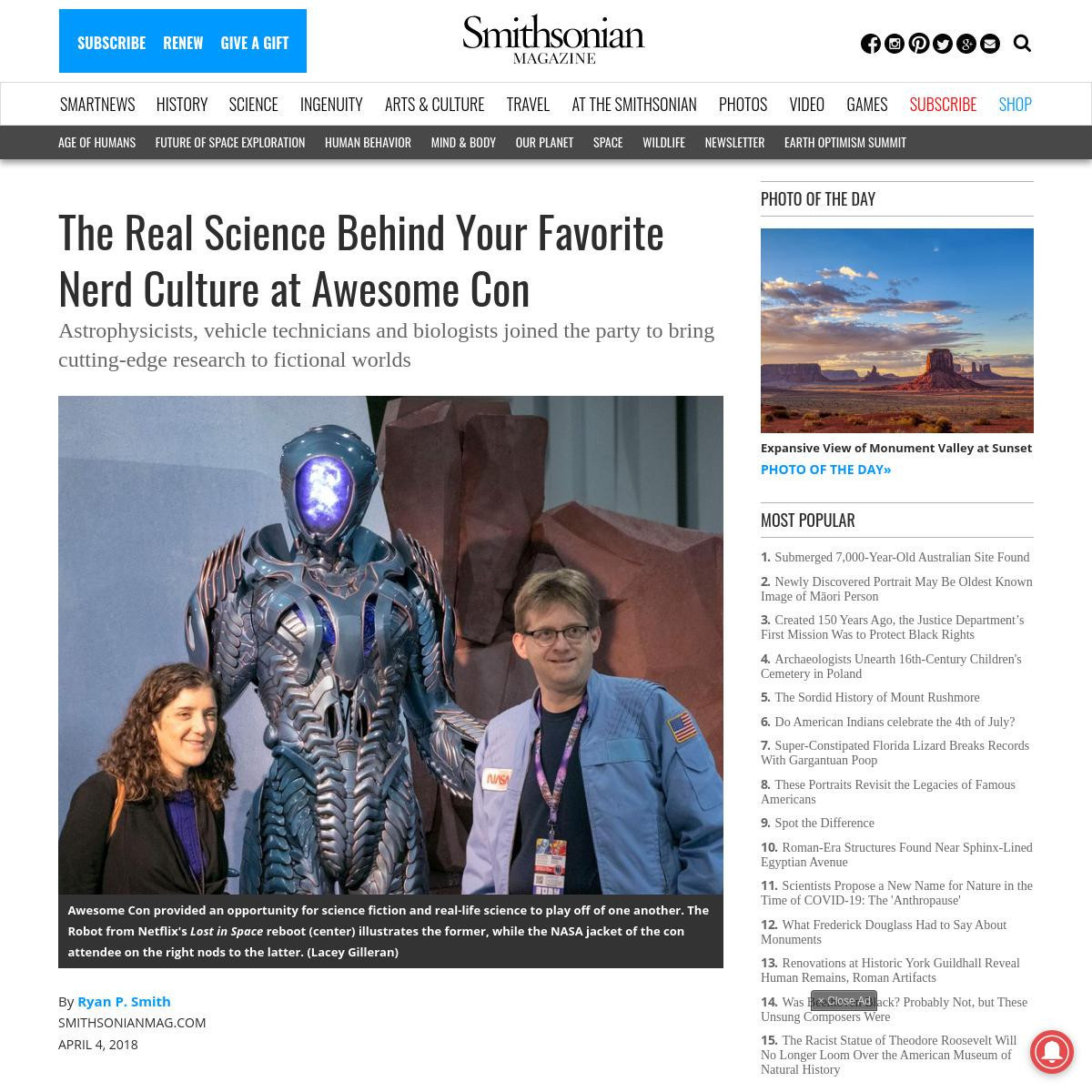