Astronomers May Have Just Detected the Universe's First Stars

The aftermath of the Big Bang—the moment our universe exploded into existence about 13.8 billion years ago—was a little anticlimactic.

After all the hullabaloo, the universe was cold and dark for quite some time, full of radiation and clouds of hydrogen gas. Stars didn't appear until millions of years later, a moment called the Cosmic Dawn. Now, reports Hannah Devlin at The Guardian, researchers detected signals from what they believe to be those very first stars. If the find is confirmed, it could give scientists a peek into the universe’s ancient origins.

As Sarah Kaplan at The Washington Post reports, the light from these stars is much too faint for telescopes to see. But scientists have proposed that when the first stars winked on, the twinkling balls of light would have interacted with remnant radiation from the Big Bang, leaving an indelible mark. And in 1999, astrophysicists suggested that this very faint signal might be detectable. By carefully scrutinizing this background radiation, known as the Cosmic Microwave Background (CMB), they believed they could find a dip in the spectrum from the early flickers of light.

Finding that signal, however, was no simple task. It was predicted to lie smack dab in the middle of the FM radio waves, which means terrestrial broadcasts and other natural signals could easily overwhelm the faint dip. According to a press release, in order to cut through the clutter, researchers used EDGES (Experiment to Detect Global EoR Signature), a small, very precise table-shaped antenna located in Western Australia.

In essence, the antenna gobbles up the radio data available, which researchers can then carefully sift through. As Kaplan reports, Peter Kurczynski, a program director for the National Science Foundation, likens the process to turning on all but one radio station, and then looking for the missing station. “The team have to pick up radio waves and then search for a signal that’s around 0.01% of the contaminating radio noise coming from our own galaxy,” Andrew Pontzen, a cosmologist at University College London tells Devlin. “It’s needle-in-a-haystack territory.”

After weeding out loud and close signals, the team did, in fact, find what they were looking for—a dip in the wavelength that suggested the Cosmic Dawn occurred about 180 million years after the Big Bang. For two years, they sought alternative explanations and repositioned the EDGES antenna to test the accuracy of their measurement. But they reached the same conclusion: They were seeing signals from the first twinkles in our universe. They published their find this week in the journal Nature.

Lead author Judd Bowman, astrophysicist at Arizona State University tells Kaplan that these early stars were quite a bit different from our sun and other modern stars. The stars were blue and burned fast, composed of the only elements in the early universe—helium and hydrogen. Eventually, the stars exploded and created heavier elements like oxygen and carbon, the ingredients necessary for life. “These stars made the seeds for everything that came out of them,” he says. “It's like the fertilizer on the field, in a way. You can’t grow the crops without putting the right ingredients in the mix. That's what these stars did.”

The signal dip was very different than the researchers anticipated. In fact, it was twice as large as models suggested. What that means, explains Devlin, is that the primordial hydrogen was absorbing twice as much radiation as predicted, and the early universe was likely even colder than believed, roughly -454 Fahrenheit.

For help interpreting the find, they consulted Tel Aviv University astrophysicist Rennan Barkana. In a companion study, he argues that the discrepancy can be explained by dark matter, a theoretical type of matter that helps explains our observations of the universe. Barkana argues that interactions between dark matter and normal matter can explain the radio signature.

Harvard astronomer Lincoln Greenhill, in an analysis for Nature, cautions that the find needs further confirmation. But it could have huge implications, allowing astronomers to map the 3D structure of the universe and giving new insights into these early dark ages. It might even help researchers finally crack the mystery of what dark matter really is. 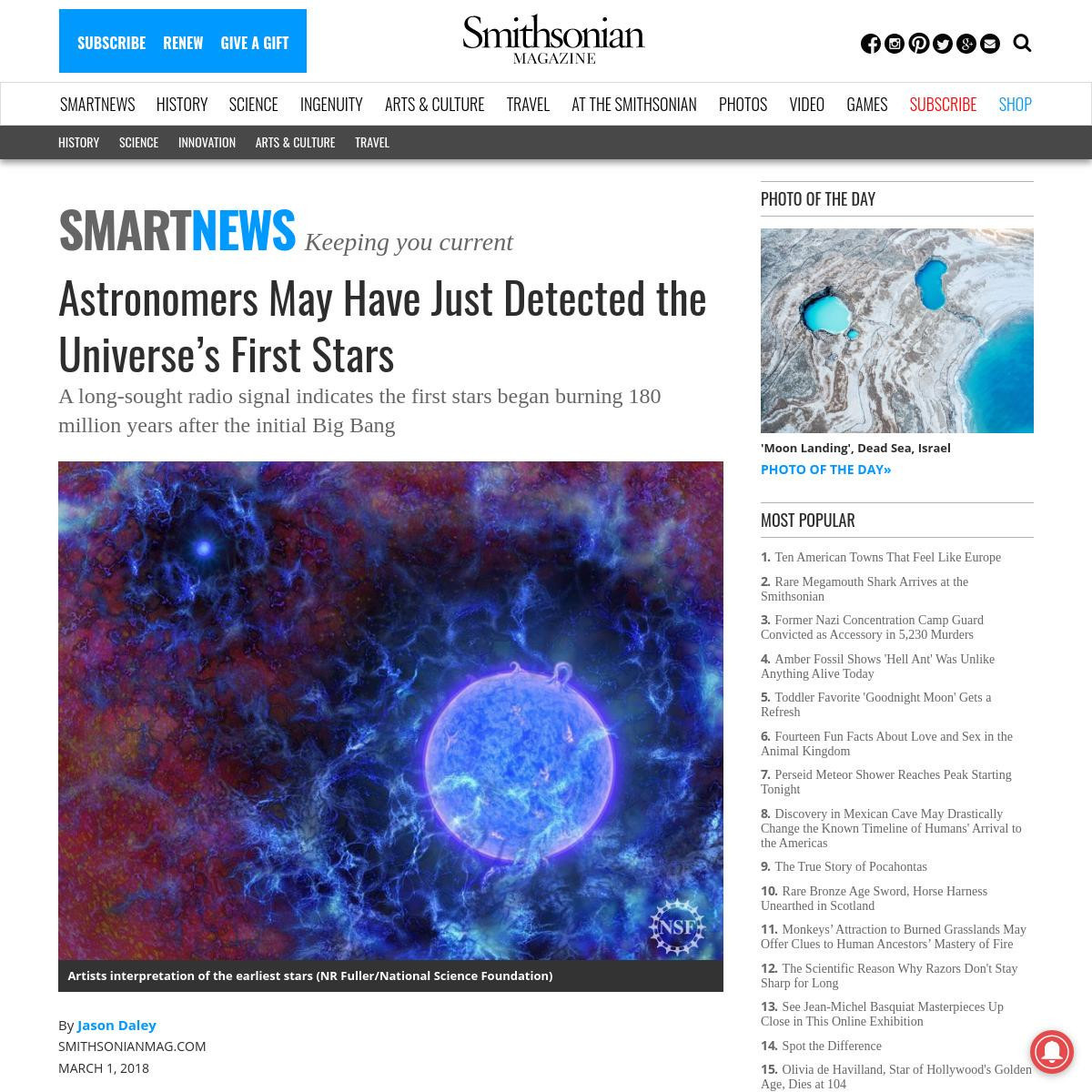