For decades, Hawai`i was a primary destination for Japanese immigrants. The cane sugar industry, which dominated Hawaiian life from the 1850s to the 1950s, recruited tens of thousands of laborers from Japan. Immigration increased after the United States annexed Hawai`i in 1898, and continued despite restrictions on Japanese immigration to the U.S. mainland. Japanese workers endured severe and unequal conditions in Hawai`i, which was controlled by white American business interests. Still, Japanese immigrants established a strong and lasting community that supported their families and maintained their cultural traditions.

The need for cheap labor forced plantations to recruit contract workers from China, Japan, Korea, the Pacific Islands, and the Philippines, as well as Puerto Rico, Europe, and California. The unique racial and ethnic mix in contemporary Hawai`i is due to this history. The largest group of workers came from Japan. Unlike other Asian groups, the Japanese included significant numbers and percentages of women workers.

This trunk belonged to Kumataro Sugimoto, who immigrated to Hawai`i from Kumamoto, Japan, about 1902. After hearing stories of quick wealth, Kumataro left for Hawai`i to seek his fortune. Later, he brought his sons to help him on the plantation. One of his sons, Kichizo, married an American-born Japanese woman and started a family in Hawai`i. Inscriptions on the trunk include Sugimoto, the family name, and Hawai`i, the destination. This was a common practice for identification on any long voyage. This trunk or toronko, made of leather and paper, carried kimono and other personal belongings. Immigrants also carried Yanagi-gori, suitcases made of willow branches, and others made of bamboo and rattan, as well as cloth bags. 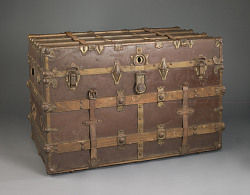